.Highs and Lows at Lungomare 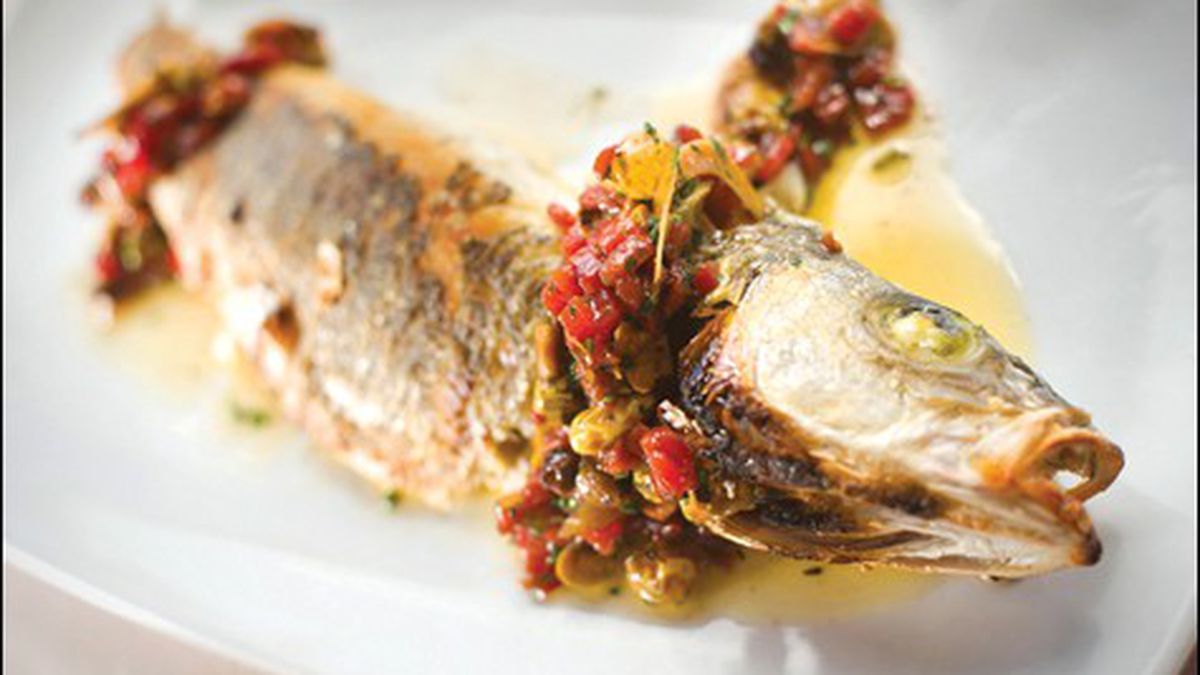 When the definitive book about Oakland’s food renaissance is written, the aspiring restaurant impresario Chris Pastena should get an entire chapter — or several pages, at least — all to himself. In a matter of months, he has gone from being co-owner of one popular dining establishment (Chop Bar) to having his name attached to at least three ambitious new projects. Lungomare, a new Italian restaurant located on the Jack London Square waterfront, in the cavernous and glittery former home of Miss Pearl’s, is the first addition to Pastena’s growing empire.

Chop Bar is, in many ways, the quintessential Oakland restaurant, with its laid-back hipster vibe, DIY design aesthetic, chummy service, and house-made, well, just about everything. I wondered how that approach would translate to a huge waterfront space.

The short answer: It doesn’t.

Far from being Chop Bar 2.0 (with Italian food), Lungomare is — outwardly, anyway — the exact opposite. It’s the kind of formal place where several well-dressed people greet you at the host stand. The servers wear uniforms; the music tends toward easy listening; the ambience is generic-waterfront-seafood-restaurant. There’s no pretense of anything hip or edgy.

But look: Oakland contains, and should contain, multitudes — hipster cafes and dive-y restaurants and schmancy white-tablecloth joints. It’s a credit to Pastena and his partners that they’re not trying to fit every venture into the same mold. Anyway, as long as the food is amazing, that’s what matters, right?

In truth, both of my meals at Lungomare had their share of highs and lows. But the highs were memorable enough to make the restaurant’s mantra — “Quality Ingredients, Executed Perfectly” — feel like more than just your standard-order public relations catchphrase.

Chef Craig DiFonzo’s menu draws inspiration from a collection of coastal villages in northwestern Italy known as Cinque Terre, which, like Oakland, is known for its mild weather and vibrant food culture — in Cinque Terre’s case, one that incorporates Ligurian and Tuscan influences.

That regional specificity, which includes an emphasis on seafood, gives Lungomare a certain added cachet. For instance, there are far too few places in Oakland that offer one or more whole fish options on a nightly basis, as Lungomare does, and even fewer that can roast a fish as perfectly as the whole branzino we were served one night. The fish had been stuffed with fresh herbs and seasoned with salt and pepper — simple and straightforward, but wow: The contrast between the fish’s crisp skin and sublimely juicy flesh was outstanding. Ladled on top was a tasty sweet-and-sour “Agri Dolce” sauce that consisted of olive oil, roasted sweet peppers, pistachios, and big slices of garlic.

Our server presented the fish to the table whole, head and all — a thing of beauty — then took it back to the kitchen to be boned. Make sure you ask for the head back if, like me, you prize the thin sliver of meat in the cheeks and the fatty, gelatinous bits that you can get only by picking at the jaw and skull.

Also stunning was the distinctly modern take on ribollita, a Tuscan vegetable-and-bean soup similar to minestrone. Instead of just serving the thick stew as is, DiFonzo soaks pieces of rustic bread in it for a full day, then sears that soupy mixture in a hot skillet until the top is well-browned and crispy. Crowned with a sunny-side-up egg, the dish is the textural equivalent of grandma’s Thanksgiving stuffing — crunchy, soggy, starchy, creamy, and decadent.

The kitchen team also has a deft hand with many grain products. The polenta, served with wild mushrooms and mascarpone, was earthy and luxurious, and had an appealing bit of texture from the whole-grain red-flint cornmeal the restaurant uses. And the star on a plate of rotisserie chicken wasn’t the chicken itself (crisp-skinned and well-brined though it was), but rather the side of toothsome fregula sarda (a Sardinian cousin of Israeli couscous), which came with cubes of golden beet — a refreshing alternative to butternut squash.

According to DiFonzo, Lungomare makes all of its pastas in house and cuts them using old-school implements: hand-carved stamps for disc-shaped corzetti, a Ligurian specialty; a guitar-like chitarra board for thin, squared-off spaghetti strands. It’s surprising, then, that the pasta was by far the most disappointing part of the restaurant’s repertoire.

The squiggly handmade trofie, also known as Ligurian gnocchi, were served with pesto — perhaps Liguria’s most famous culinary invention — albeit an unconventional (and somewhat bland) version made with fava leaves and pistachios. And the squid-ink chitarra was a spot-on rendition of a classic flavor combination: clams, garlic, a bit of smoked pork, and Calabrian chili heat.

However, in each case the noodles were undercooked and oddly brittle, effectively ruining both dishes. DiFonzo told me the pasta is meant to be “to the tooth,” as is customary in Italy. But it’s difficult to imagine that this particular texture was anyone’s ideal.

That kind of flaw, in a restaurant boasting “perfect” execution, is hard to forgive, especially when the prices put Lungomare in the higher end of Italian restaurants in town. All told, the restaurant has yet to achieve the level of classiness it needs to feel special-occasion-worthy. The young servers are friendly but lack a certain polish. During one visit we were relegated to a lonely, semi-private room (labeled, incongruously, the “Gold Mountain Club”), despite the fact that the restaurant was two-thirds empty.

Still, the good dishes were so good that I feel inclined to look optimistically toward a future when Lungomare becomes the kind of destination restaurant that it aspires to be — one where that big dining room is filled up and lively, and Chop Bar crossover customers and the jacket-and-tie crowd can mingle together, enjoying the grand view (sailboats lined up on the water) and the best Italian-style whole roasted fish in town. &#8;