.Highlights of the Oakland Music Festival 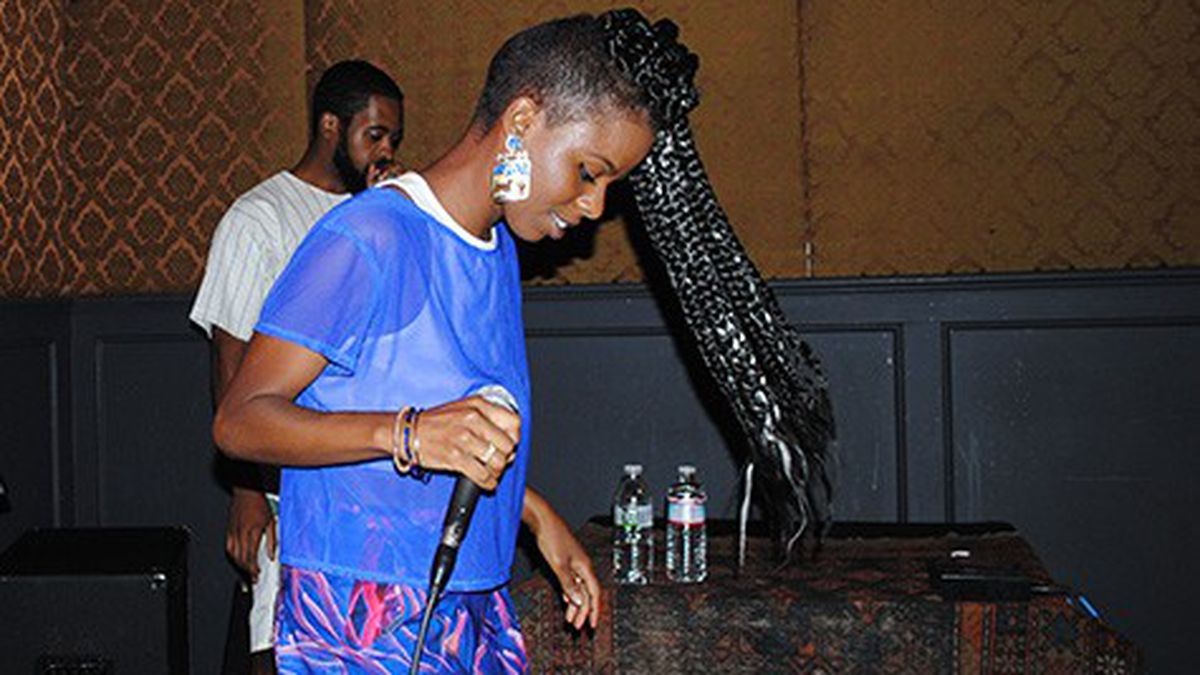 Early Saturday afternoon at the Oakland Music Festival, East Oakland rapper Ezale took the stage at Club 21 — a gay club in Uptown that hosted the festival’s High Sidin’ Stage. “Five Minutes of Funktown,” his bouncy, b-boy-era-inflected single slapped through the speakers as a live bassist played along. A hyperactive Ezale shook his braids and flashed gold grills in a huge, childlike grin while performing underground party favorites “Foreal Foreal” and “Too High.”

Ezale’s set was when things started to really get going at the Oakland Music Festival, which had been off to a fairly slow start until then. Before it, white dude reggae band Clear Conscience provided Sublime-esque background music to an audience of five people at the Town Stage. At the nearby beer garden Lost & Found, singer-songwriter Emily Moldy crooned moody bedroom rock tunes to folks who seemed to be there for an afternoon drink, unaware that the bar was one of the festival’s outposts.

Meanwhile, a swelling crowd that quickly became a mosh pit joined the unself-conscious souls working it out on an empty dance floor at Club 21. Ezale got so wild that he appeared to forget to rap along to his backing track. That was fine. No one cared. The crowd was dancing like it was 2 a.m., not 2 p.m.

Now in its second year, the Oakland Music Festival has expanded to include two outdoor stages and several Uptown venues: the artsy, upscale Era Bar & Lounge, kitschy Club 21, and Lost & Found with its mellow, outdoor patio.

To accommodate a fashionably late crowd, the set times at Era (which served as the Hella Tight Stage) were pushed back by hours at the last minute, which forced several notable local acts and national headliners to play simultaneously. But the wait was worth it for performers such as Bay Area producer Turbo Sonidero Futuristico, who initially showed up to an empty club and was asked to wait until the festival gained momentum. Once he began spinning haunted cumbia remixes, the bodies piled in. A skilled curator of disparate sounds, Turbo smoothly wove elements of traditional Latin American music into his own trippy production, providing the soundtrack for an off-kilter dance party.

He was followed by the poetic Oakland MC Queens D.Light. Queens dexterously spat wordplay-heavy rhymes over 1990s-influenced, jazzy production (which evoked Lauryn Hill and Digable Planets) and harder, more aggressive rap beats. She exuded confidence, locking eyes with the crowd in the intimate space, often stopping to deliver complex verses a cappella so that people could take a break from dancing to digest her lyrics.

Backed by a grandiose live band with an arena-worthy sound, New York-based singer Jesse Boykins III’s rich, operatic vocals soared as he passionately writhed on the Town Stage. He was unafraid to get over-the-top expressive, twisting his face with every word and swishing his lengthy afro. His shtick was a little histrionic, but his music was moving nonetheless. And perhaps Boykins’ antics just reflected his lyrical topics, which detailed desire, heartbreak, and catharsis.

Rising star SZA, also from the East Coast, took the big stage next. The first woman signed to Kendrick Lamar’s label Top Dawg Entertainment, SZA has been lauded as a harbinger of a new era of left-field pop infused with R&B and ambient electronica (think FKA Twigs, Grimes, and Kelela). On stage, she was goofy and down-to-earth before unleashing her rich, velvety vocals over glitchy beats and dreamy, live soul tracks.

The smaller stages were rife with Oakland talent. HNRL — a collaborative project between solo artists 1-O.A.K. and Trackademicks — was impressive. Seamlessly switching between rapping and singing, the pair played synth-driven jams that referenced hip-hop, R&B, and new wave. Bright pop melodies led to psychedelic keyboard solos as 1-O.A.K. programmed live beats on a drum machine. With tracks fluctuating between radio-ready and challenging, HNRL emerged as a surprise highlight of the festival.

The day’s big headliner was Dom Kennedy, an underground rap favorite. But compared to the boundary-pushing acts before him, his alpha male persona came off as lukewarm. The lack of Oakland-based headlining acts was disappointing, especially at a festival whose mission statement is putting local talent on the map. After a day of experiencing genre-defying acts who had developed original voices in the very streets and clubs that hosted Oakland Music Festival, Kennedy’s set came off as rote and familiar — and thus, out of place. Still, Oakland Music Festival’s booking reflected the town’s diversity and brought together unlikely audiences, with punks moshing to rap and radical feminists twerking.