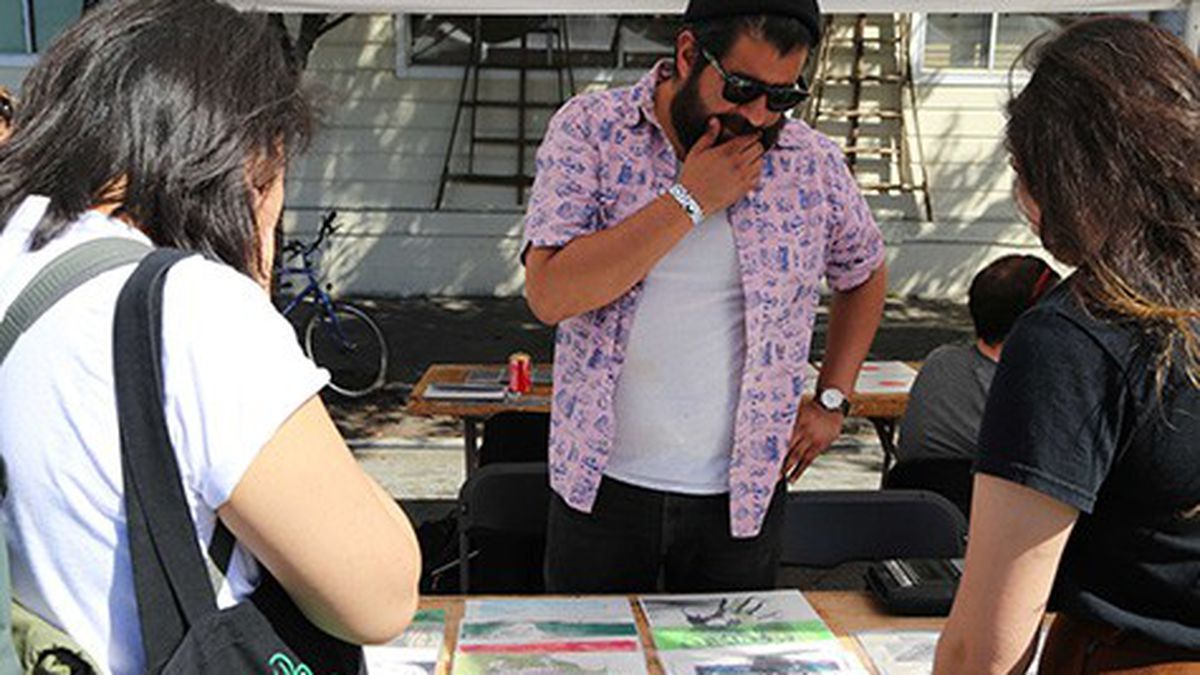 The eclectic fair upchucked personalities and goods from most local music tribes.

The local music community is a scattered bunch of tribes, each one willfully confined to its preferred physical and online realms. It’s natural for artists to seek kinship and establish collective identities around shared aesthetic tastes, but the Bay Area’s many scenes remain especially insular. This is mostly an asset, because inward-looking creativity can yield startlingly original work that’s unsullied by outside influence — but the same tribal mentality contributes to Bay Area music’s position as a national outlier. The media machinery in Brooklyn generates buzz bands on schedule, while Los Angeles’ entrenched industry resources wield mighty clout. Local music is more clandestine, preferring to thrive in secret rather than flay itself before industry gatekeepers. For the voyeur interested in local music’s veiled innards, the Bay Area Record Fair offered a revealing peek.

The annual event — affectionately known as BARF, with putrid-green font and all — is organized by the booking outfit Professional Fans, and Jessi Frick of Father/Daughter Records. Now in its second year, BARF returned to Thee Parkside last Saturday. The participating labels swelled from last year’s 25 to more than 40, necessitating a move from the courtyard to the street outside. Admission was free after the first hour, and for most of the afternoon, a formidable mob either roamed between booths or wandered inside Thee Parkside for bands and beer.

Beyond the wares, BARF also showcased the variously grizzled, gregarious, and austere personalities of local label operators. Jonathan Tuite, whose metal imprint Flenser is named after folks who carve blubber from whale carcasses, presided over a blackened and severe selection that clashed with the cheery afternoon. At the Slumberland table, Mike Schulman gabbed excitedly about the recently reunited Aislers Set.

Arvell Hernandez — proprietor of the eight-year-old, San Francisco-oriented Empty Cellar imprint, notable for releases by Tim Cohen’s Magic Trick, The Sandwitches, and most recently the Cool Ghouls — grinned through an unwieldy beard. Hernandez shared a tent with Eli Wald and Thomas Rubenstein of Melters — the commendable champions of Violent Change’s underrated discography as well as releases from Tony Molina’s old group Ovens — who appeared surprisingly young for having built such a cohesive catalog.

At the Melters and Empty Cellar table, one curious attendee struck up a conversation about vinyl, the principal format of the event’s participating labels. “It just sounds better, no?” he asked. Hesitant agreement followed, then someone added, “Well, some people like it because it sounds worse.”

And some people like vinyl because it comes encased in a piece of visual art. Hernandez brandished an LP in a tip-on-style jacket and noted reverently, “Matte back, gloss front,” like an esteemed jeweler. Pirate’s Press, the label offshoot of the local vinyl manufacturer, presented dazzling, colorful platters with inventive packaging. At Moses Montalvo’s table, the offerings of his Pretty Penny imprint looked more like an array of prints than records.

Most labels at BARF could be called “boutique,” with their niche audiences and limited editions, but Pretty Penny especially warranted the term. Montalvo’s releases appear in editions of one hundred, each encased in a unique sleeve. For Montalvo, the small editions are less about collectability than practicality. “I like that I basically get to hand off each one myself,” he said.

Montalvo started the label in order to release his own music, created under the moniker Woodsboro, because he felt uninterested in everything having to do with running a band besides packaging a record. For his seven-inch EP, Montalvo solicited designs from more than seventy artists and created single prints to enclose each record. Pretty Penny’s most recent release is from visual artist (and former leader of the disbanded San Francisco rock outfit The Mallard) Greer McGettrick, which features churning, queasy industrial electronics. Woodcut, block printed squares create a grid on the cover that descends from one hundred shapes to one. At an upcoming release event, the jackets will be installed on walls and available for purchase, gallery-style.

The name Pretty Penny is a nod to the daunting expense of manufacturing vinyl, a cost that every label operator at BARF has reckoned with in his or her own way. Ben Funke of Captcha records, which released early solo titles by Ty Segall and highlights from Thee Oh Sees’ catalog, is teaching a course on operating record labels at Humboldt State University. Even he grimaced at the realities of label overhead, admitting that he would suggest students keep their profit expectations low.

James Decker described his business model for Resipiscent Records as “anti-profit,” meaning that as soon as manufacturing expenses are recouped, he passes all revenue along to the artist. He wore an intricately embroidered label T-shirt, which he explained was created before his eyes by a tradesman in Indonesia. Decker travels to South Asia often, collecting field recordings and regional music. Impressed by the tradesman’s ability to recreate Resipiscent’s logo with fabric by sight alone, Decker paid more than the asking price, then discovered the financial hurdle of trade tariffs when he shipped the apparel stateside.

One increasingly common way to alleviate costs is to produce cassettes. Moon Glyph’s table featured a cassette deck and headphones for sampling the label’s ambient and experimental tape selection. With so much focus on format, it was easy to forget about the artists and genres that don’t rely on physical releases at all. Though tapes are quite prevalent in the fringes of electronic music, the genre mostly develops online through platforms such as Bandcamp and SoundCloud. Furthermore, there was hardly any hip-hop represented at BARF. Rather than a curatorial oversight, the lack of hip-hop had more to do with the genre’s web-reliance, in which free mixtapes, iTunes uploads, and music videos have largely supplanted physical product as the means of distribution.

As much as BARF felt like a tribal summit, there were plenty of scenes absent by virtue of the fact that they largely circumnavigate labels. The ideological struggle between major and independent imprints calmed a while ago, with each camp forced to worry about privation, rather than ethical quibbles, while the industry basically collapsed. Nowadays, a rift exists between record labels and the artists who question their necessity. The move to online platforms in lieu of the old models is liberating and necessary in many ways, but it also lacks the human interaction that lent BARF its charm: As the internet fragments and depersonalizes music scenes further, it also felt uncomfortably rare.