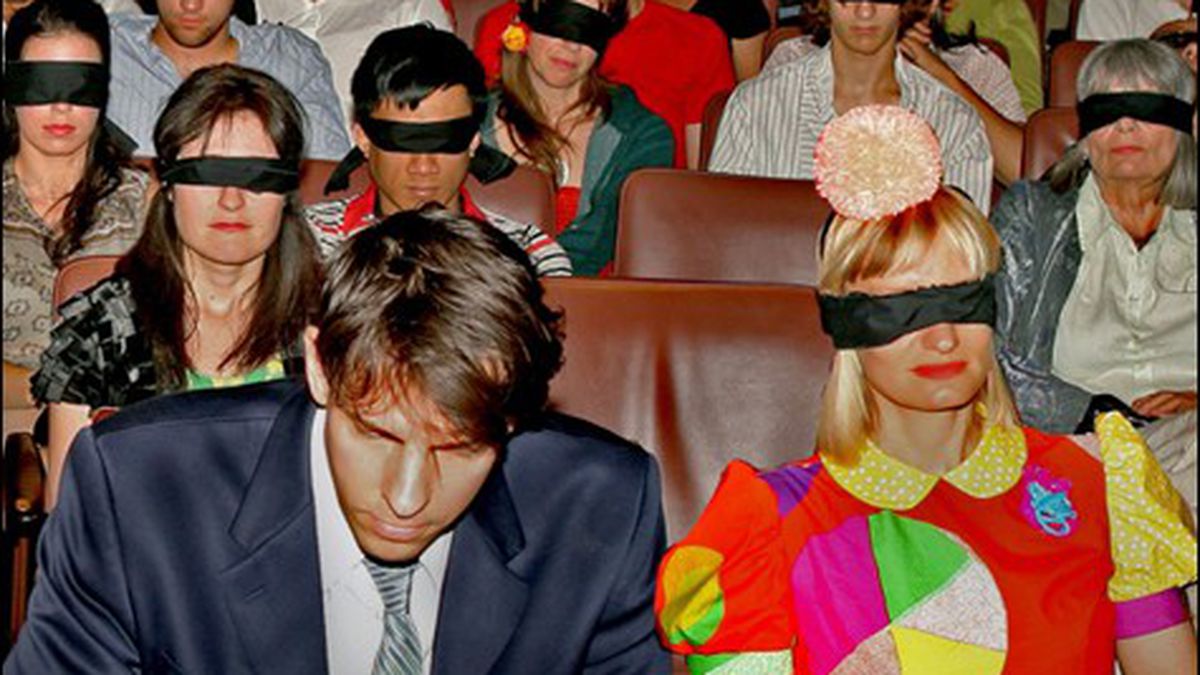 The New Orleans duo brings a cavalcade of puppets and gadgetry to downtown Oakland.

For more than fifteen years, Quintron has been perfecting his blend of murky, low-fidelity drum-beat patterns and fast-paced organ melodies for a sound that’s almost impossible to categorize. Based in the Ninth Ward of New Orleans, Quintron describes his music as “swamp-tech” — “like rock ‘n’ roll, but more swampy and techy.” He and his longtime collaborator, spouse, and master puppeteer Miss Pussycat perform live alongside each other, assembling an unstoppable experience of outsider art and music.

Onstage last Friday at The New Parish, Miss Pussycat began with an overture — actually a complex and darkly humorous puppet show. Appearing on an eight-foot-tall stage bedecked in neon-pink vinyl and gold glitter, the characters engaged in laconic dialogue and embarked on an absurd adventure that included fake blood, explosions, blacklights, and a cameo by Dracula in a tinfoil spaceship. Miss Pussycat narrated the story, accompanied by a soundtrack of original electronic muzak. At the end of this hallucinatory expedition, the lights on stage dimmed, the fog machines revved, and a low and ominous tone emanated from Quintron’s instruments, hushing the audience in anticipation of the dance party about to commence.

Once Quintron took his seat behind the retrofitted Lincoln Continental grill that adorned the front of his Hammond organ/Fender Rhodes synthesizer hybrid, dissonant notes erupted in a staccato rhythm, bouncing into the room like a defibrillating wave. His nimble fingers clobbered each of the two keyboards with a fluidity that resonated throughout his lanky frame, while he simultaneously pounded his left foot in order to control the high-hat cymbals that punctuated the droning tones of his hand-built, light-activated sound machine, the Drum Buddy. These are the only instruments Quintron requires to compose a full, rumbling wall of sound that elevates the concept of a one-man band to a schizophrenic, yet soulful, new dimension.

The Drum Buddy isn’t just a supporting member in Quintron and Miss Pussycat’s performance; rather, it’s the grand marshal of their psychedelic parade. Devised by Quintron, it resembles a turntable but serves as a melodic and percussive instrument: A punctured coffee can rotates around a lightbulb, forging guttural, buzzing sounds that rely on interactions between the photo-sensitive resistors and specially designed oscillators attached to the machine. It includes four drum tones — snare, kick, bass, and scratch — each with a corresponding light sensor and oscillator, each triggered by the speed at which the coffee can rotates. Quintron manipulates the can by hand, similar to a DJ scratching vinyl, but with a far more alien timbre. In layman’s language, it’s a cool bit of whiz-bang gadgetry.

The majority of their repertoire on Friday night highlighted selections from Quintron’s latest album, Sucre du Sauvage, released last year on Goner Records. But the most impressive songs were ones they had written many years prior, all executed with the zeal that musicians usually reserve for tackling new material. And their attitude was only outpaced by their arsenal: From the first punch of the organ, Quintron rendered himself a one-man orchestra. He exuded low, long blats from the Drum Buddy and mixed them with the greasy, electronic bursts that bounced from his custom organ/synth monstrosity. Miss Pussycat belted out lyrics while shaking her maracas, and the crowd shouted along throughout the entire evening. At several points in their performance, Miss Pussycat found comfort bouncing and drinking on the dance floor along with the audience, fostering a sense of community that clung thick in the muggy air.

This was the duo’s first performance in Oakland in several years, and its members delivered a surreal and spirited show filled with elements that can only be experienced live. With their mixture of costumes, characters, dance beats, and heartfelt enthusiasm, Quintron and Miss Pussycat enjoined fans in Oakland to let loose, Crescent City-style, and celebrate our own eccentricity. And, in true Oakland fashion, we did not hesitate in doing so.

The World Is Going To Be Okay: ‘Arthur Magazine’ is Coming...