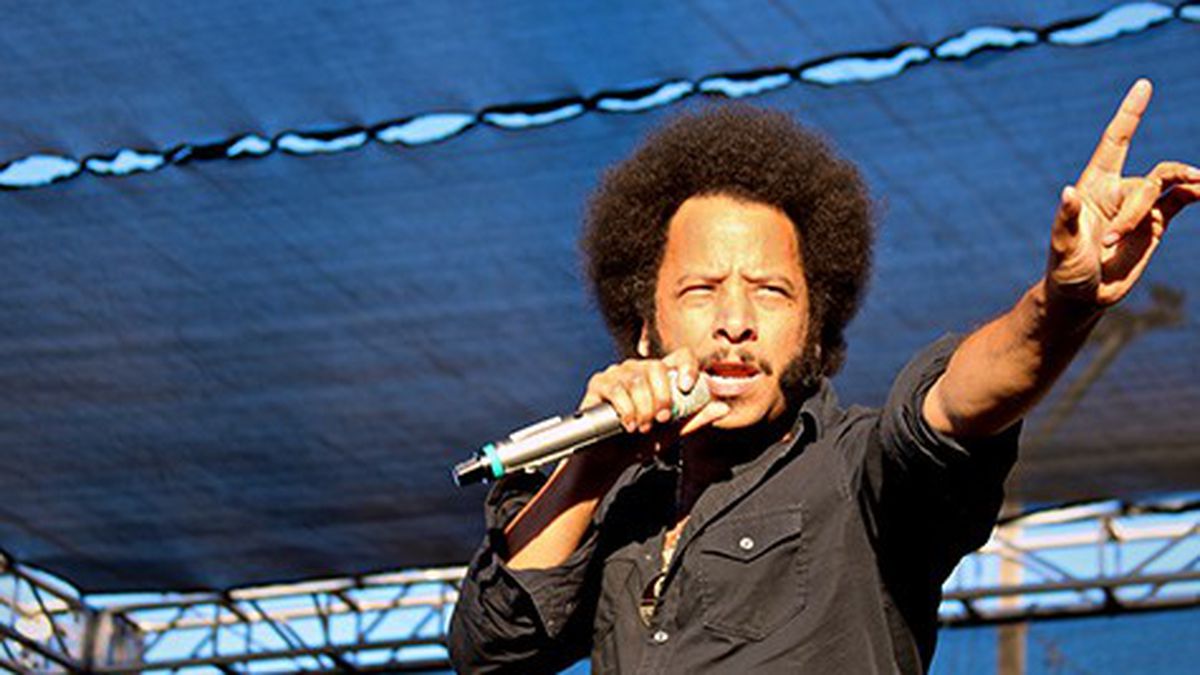 Hiero Day: They Came from Down the Street

Hiero Day is the only music festival in Oakland at which attendees can skate loading docks while clutching tallboys and remain on the right side of the rules. On Monday, 3rd Street between Market and Adeline streets transformed into a teeming monument to hip-hop, as vendors representing local culinary and sartorial fixtures abutted impromptu turf dancing and live mural painting. Breakdance crews spun within inches of their competitors’ faces, mean-mugging between poses and dapping conciliatorily following judgment. Naturally, the central aspect of hip-hop culture represented by Hiero Day was the music, with three stages accommodating dozens of performers, their entourages, and attendant GoPro documentarians.

Indeed, it was fitting for the avowedly homegrown event that professing Oakland heritage and appreciation was something of a sport. Cali Agents — the duo composed of Planet Asia and Rasco, who gave spirited renditions of tracks from the pared-down, austere indie classic How the West Was Won — made a point of emphasizing that it once recorded “around the corner.” In the middle of a fiery set by The Coup — a group that grippingly reimagined its early, sample-laden boom-bap as epic funk — bandleader Boots Riley noted, “We come from down the street.” Zion I, meanwhile, trotted out the enduring “In the Bay” to rapturous applause.

Hieroglyphics’ core members include Del the Funky Homosapien, the four members of Souls of Mischief, plus Casual, Pep Love, Domino, and DJ Toure. They came together in the early Nineties in Oakland. Del’s cousin Ice Cube produced his g-funk debut, but the group’s figurehead opted for jazz flourishes on 1993’s No Need for Alarm. Likewise, that year Souls of Mischief issued 93 ’til Infinity, a front-to-back listen with music of such texture and nuance that only the rappers’ arresting lyricism could match it. Casual’s pugnacious, heavy full-length Fear Itself appeared the next year, rounding out a formidable spate of full-lengths.

Enduring commercial viability, however, proved elusive. So Hieroglyphics grew deeper roots in its native soil and went the independent route for later highlights, such as Del’s Deltron 3030 outing with Dan the Automator, which the two performed as a pretty ravishing surprise set last year. While Hieroglyphics established a complex in East Oakland and invested in community ties alongside merchandising and day-to-day brand upkeep, the group performed irregularly in its hometown, a city with a historically hostile attitude toward rap, one of its greatest cultural exports. The beginning of Hiero Day as a free annual event in Oakland four years ago, however, initiated a new chapter. It brought vindication. In a gesture rife with symbolic heft, Mayor Jean Quan formally recognized September 3rd (9/3) as Hiero Day.

Hiero Day functioned as a way for the group to cement its own legacy. The first couple years coincided with the twentieth anniversary of the aforementioned albums — the best of which, 93 ’til Infinity, boasts a title that eerily anticipated a distant reissue campaign — and on Labor Day retained that sense of reflexive congratulations (admission to the event was $19.93 this year). It’s deserved. Hieroglyphics is entitled to celebrate its past, to hold its work up as important, especially since national pundits routinely overlook Bay Area hip-hop. But it shouldn’t happen at the expense of present scenes.

To wit, that the line-up skewed erstwhile was clear from the booking of Luniz. It spoke to Hiero’s priorities that the Nineties group with a repertoire so limited that its set amounted to ten minutes appeared as main support for Hieroglyphics festive headlining bout. Longtime hip-hop personality Ed Lover typified the myopic attitude’s worst form. Plugging the forthcoming webcasting site Hip-Hop TV, Lover promised to eschew that “new, fake shit.” At that, he bizarrely flailed his arms, apparently making an inscrutable impression of contemporary rap. Whatever. (Last year he instructed the crowd, “Google me bitch!”)

That isn’t to say that Hiero Day lacked new talent entirely. Rather, Richmond artists and ambassadors of shmop Kool John and P-Lo continued to support their recent Moovie full-length with a headlining set on the Third Eye stage, where HBK Skipper and local standout Caleborate both made unannounced appearances. Likewise, the Third Eye stage featured Jay Ant, rapper and producer responsible for beats on much of G-Eazy’s breakout These Things Happen. But for a better picture of contemporary local hip-hop overall, look back to Thizzler Jam.

One surprise highlight arrived from R&B singer Netta Brielle — note: one of very few women on the line-up — who performed a dynamic and fraught set with earnest references to her immediate surroundings. Of course, there was “3xKrazy,” her buzzy homage to Oakland’s old mobb music act of the same name, with its infectious boast, Nah/I’m from here from here. But before that, Brielle sang atop just piano, flexing her technical skill and emotional range in a ballad that she dedicated to a friend slain nearby in West Oakland. Behind the stage, a train rolled by. The port cranes loomed. Brielle adlibbed, That’s why I cry/Oakland, we gotta do better in our streets.

Correction: This article originally misidentified Del’s cousin as Eazy-E. His cousin is in fact Ice Cube.

Alameda’s Emergency Care Is on the Line Tonight