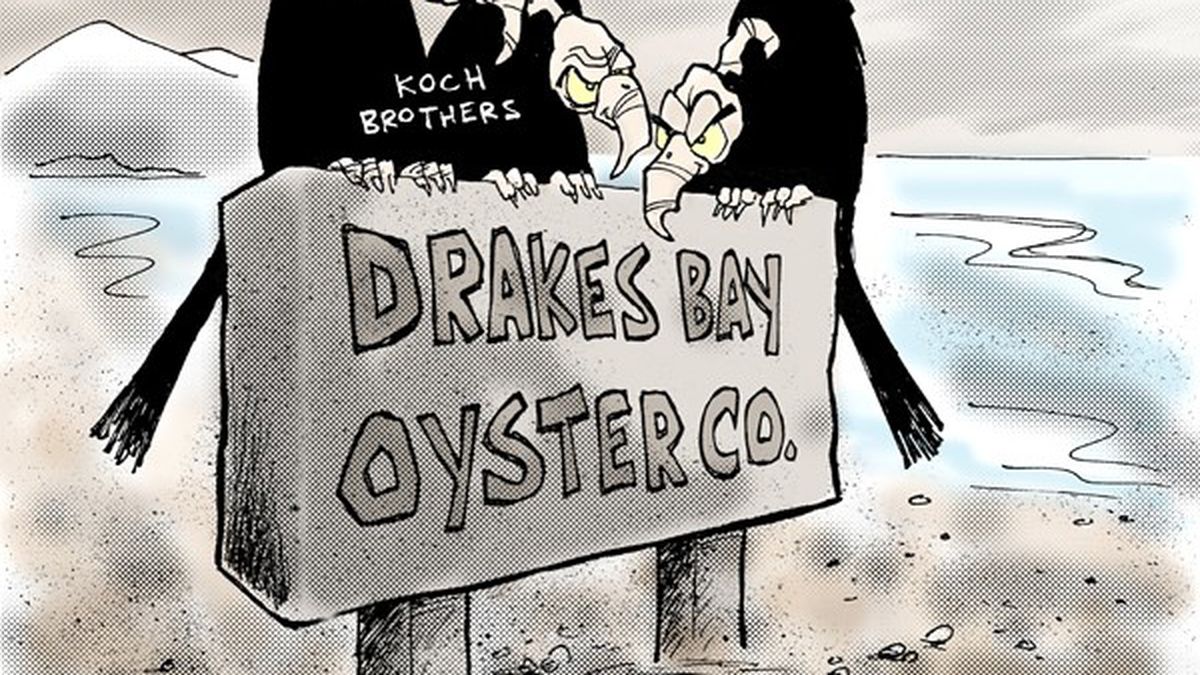 Drakes Bay Oyster Company has teamed up with a Koch Brothers-linked group in its battle with the Obama administration.

Some folks may have wondered why we have continued to write about the oyster farm controversy at Point Reyes National Seashore. After all, it’s not exactly an East Bay issue — although every year lots of East Bay residents visit Point Reyes, the environmental jewel of the Bay Area. But the real reason we’ve stayed on this story is because of the precedent it would have set had US Secretary Ken Salazar decided to delay the creation of the first marine wilderness on the West Coast.

Drakes Bay Oyster Company and its supporters, many of them progressives, have contended that the oyster farm deserved to be treated differently and have its lease renewed at Point Reyes because they say it’s an environmentally sustainable business. But as we’ve noted previously, that argument is deeply flawed because if the oyster farm were to receive an exemption under federal law governing wilderness areas in national parks, then it would have opened the door for non-environmentally sustainable businesses to request the same. And if that were to happen, it could have serious and wide-ranging consequences for our national parks.

As such, it came as no surprise that conservative interests — those that believe private businesses should have additional rights to operate on public land — were keeping close tabs on the oyster farm controversy as well. And last week, they appeared to become major players in the fight when the oyster farm’s owner, Kevin Lunny, decided to team up with a shadowy group that has ties to the ultra-right-wing Koch Brothers and the Republican Party (as the Express first reported on December 5 on its website). In fact, the secretive group, which calls itself Cause of Action, is now leading Lunny’s legal fight against the Obama administration’s decision in late November to close his oyster farm at Point Reyes.

Cause of Action is run by Dan Epstein, a former staffer for the Charles G. Koch Charitable Foundation. Epstein also was the top Republican attorney for the US House Committee on Oversight and Government Reform — which is headed by California GOP Congressman Darrell Issa. Charles Koch and his brother, David, made billions in the oil and natural gas industries and spent hundreds of millions of dollars this year attempting to defeat President Barack Obama. The Koch Brothers also are the primary financiers of the Tea Party, and have heavily backed hard-right Republican candidates in recent years.

As for Issa, as head of the Oversight Committee, he has led a series of investigations into the Obama administration since the GOP regained control of the House in 2010. Issa’s probes, viewed by Democrats as being overly partisan, have included the Fast and Furious scandal, have dominated Republican talking points, and have provided regular fodder for Fox News.

Despite Cause of Action’s ties to the Koch brothers and the Republican Party, Mary Beth Hutchins, a spokeswoman for Epstein’s group, maintained in an interview with me last week that it is a “nonpartisan” charity. Hutchins, however, declined to reveal the identities of the group’s donors. Cause of Action has yet to file a federal tax return with the IRS, so its finances are not yet public; Hutchins said the group formed in 2011 and received its 501 (c)(3) status earlier this year.

In a conference call with reporters on December 4, Hutchins said Cause of Action was helping Drakes Bay Oyster Company and Lunny free of charge. Lunny also has received help from Issa before. Last year, Issa strongly criticized the National Park Service for its contention that the oyster farm’s lease should not be renewed. Issa instructed his Oversight Committee to launch an investigation. Many Democrats, including North Bay Congresswoman Lynn Woolsey, viewed Issa’s actions as just another attempt by Republicans to embarrass the Obama administration. Fox News has also taken up the oyster company’s fight against the park service.

There is no evidence that Lunny, who also operates an organic, pasture-raised cattle ranch across the street from the oyster farm, is some sort of Tea Party wannabe, but in his desperation to maintain his lucrative oyster business, he has joined forces with interests that are pushing the rights of private companies on public land. In a federal lawsuit filed against Salazar last week on behalf of the oyster company, Cause of Action argued that his decision to not renew the oyster farm’s lease amounted to “an illegal taking” of private property — even though the oyster farm was operating on public property and Lunny knew when he bought the farm in 2004 that the park service had no intention of re-upping his lease after its November 30, 2012 expiration date.

Cause of Action also argued in its suit that Salazar was required by law to conduct a comprehensive environmental review of the oyster farm’s impacts on Point Reyes before deciding to not extend Lunny’s lease. Although the park service did conduct such a review, Cause of Action contends that it was inadequate. Salazar, however, said that his decision to not renew the oyster farm’s lease was not based on the environmental impacts of the oyster farm and instead hinged on existing law and policy concerning commercial enterprises on land that had been designated by Congress to become federally protected wilderness — as was the case with Drakes Estero in Point Reyes. Salazar also contends that a full environmental review is not required when making a decision on whether to renew such a lease (see “The Real Reasons for Ken Salazar’s Decision,” 12/5).

If Cause of Action wins its fight, it could force the federal government to complete full environmental reviews every time a private business wants to renew its lease on public property. Such an outcome could prove to be quite expensive for taxpayers — ironic, given the fact that it’s being pushed by a group with ties to the Republican Party. The environmental review conducted for Drakes Bay Oyster Company has already cost the federal government more than $3 million, according to Amy Trainer, executive director of The Environmental Action Committee of West Marin, a group that has strongly opposed renewing the oyster farm’s lease.

In fact, the prohibitively high costs associated with completing such environmental reviews could prompt cash-strapped public agencies to renew leases for private companies on public land rather than spend money they don’t have. “What we’re talking about is de facto privatization,” Trainer said.

Indeed, Cause of Action’s co-counsel, the Southern California law firm Stoel Rives, argued in a letter last month to Salazar that it believed it would be legally okay for him to renew Lunny’s lease at Drakes Estero in Point Reyes without a full environmental review — but indicated that it would not be okay for him to let the lease expire without such a review.