Just hours after 280 Hayward city employees began a three-day strike Tuesday morning, a picketer was hit by a van — apparently on purpose by an angry motorist who yelled at the striking workers. The incident occurred around 9 a.m. Tuesday when a man driving a white van attempted to pull into an underground parking garage at Hayward City Hall. According to witnesses, the driver, described as an elderly man, turned into the parking lot entrance and struck Jerry Schilling, a twenty-year street maintenance worker for the city, in the legs. 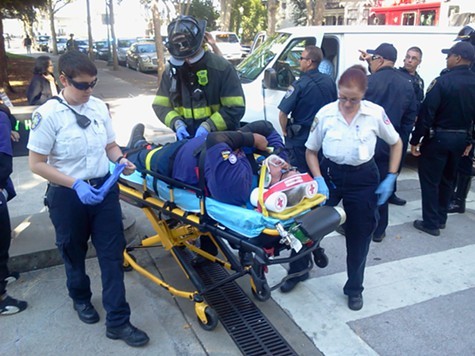 “As soon as Jerry looked, he hit him. Just pushed him,” said Jose Medina, who has worked in the city’s water treatment department for the last fifteen years. Schilling then yelled at the driver, “You hit me!” said Medina, “and the driver moved forward again.” Schilling, who had his young son in tow for the morning shift of picketing, was taken to Kaiser Hayward for minor injuries.

The City Manager’s Office said the driver was a Hayward resident seeking to obtain a building permit. A press release from the city said the Hayward Police Department is investigating the accident and that both parties claimed that the other was at fault.

According to Medina and other witnesses, the driver, yelled, “get out of the way” at striking the union member. “This guy had no intention of stopping,” Medina said. “He just wanted to bully his way through. It’s just like what the city is trying to do to us — trying to get their way, not negotiating.” Picketers say there were ready for the possibility of replacement workers hired by the city from a staffing agency in Pleasanton surreptitiously busing in workers through the underground parking garage.

The incident Tuesday morning is indicative of a slowly simmering labor dispute in Hayward that, until today, had flown under the radar as striking workers in Oakland and at BART dominated the local headlines. 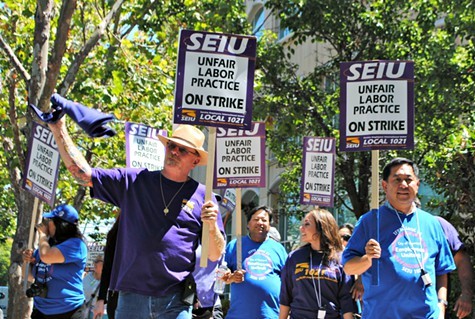 Members of the Service Employees International Union, Local 1021, the same labor union involved in the dispute with BART management and an earlier dispute with the City of Oakland, say Hayward officials have failed to negotiate with their union since February. Last month, the city declared an impasse in negotiations, which was followed by a strike vote that union members overwhelmingly approved. “Seven months ago, they said, this is our proposal,” said Linda Reid, a building permit technician in Hayward for 11 years. “And it’s been seven months of delay — take it or leave it.”

Hayward, like almost every city in Alameda County, has navigated through budget shortfalls since 2008. In 2011, the city closed a $20 million financial gap primarily through concessions from city employees. Fran David, Hayward’s city manager, has long held a firm line against the city’s unions. The union says it has given back 12 percent of wages over the past few years to help the city’s bottom line, while its membership cannot survive with another 5 percent cut, as proposed by the city.

“We have drawn the line,” said Daryl Lockhart, a SEIU Local 1021 leader at a noon rally Tuesday. “This is the line. We’re not taking no more concessions. When our backs are against the wall, we come out swinging. This is the first part of the swing, then there’s a belly blow, then there’s a chin check, then there’s a knockout.”

Management has not budged from offering the 280 street maintenance, water treatment, and building permit employees a similar package agreed to this year by the firefighters union in Hayward. That deal called for no wages increases through 2015 and required firefighters to pay up to 17 percent of the cost of their pensions. Steve Sommers, the lead negotiator for the union, said management is squirreling away money, while refusing to discuss the pots of money the union says it knows exists. “This is the beginning of a long fight against lies and corruption,” said Sommers. “You can’t take money out of here and put it there and say you don’t have money here. That’s what they’ve done. They did it before, they’re doing it now and it’s all lies. 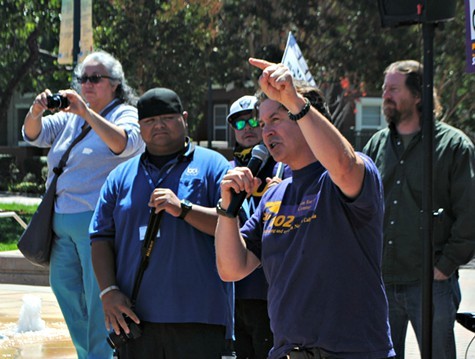 Hayward’s Mayor Michael Sweeney and the entire City Council have distanced itself from the labor discord since the beginning of the year. However, as part of its annual list of council goals, they urged the city manager to bring the city’s finances in line. Sweeney, a former state assemblyman, is currently on vacation during the August recess. It’s an issue that union leaders sought to exploit Tuesday while vowing to flood the Hayward City Council meeting next month with a “sea of [SEIU] purple shirts.” “At some point with the mayor lying on the beach somewhere and the city council on vacation,” said Pete Castelli, an SEIU representative, “they’ve got to come home and that’s when they’re going to be held accountable.”

Next ArticleViewing the Sound of Laetitia Sonami