As first reported by Inside Scoop, Hawker Fare (2300 Webster St.), James Syhabout’s Uptown Oakland rice-bowl joint, launched a new dinner menu last night, replacing the meal-in-a-bowl simplicity that had been the restaurant’s stock-in-trade with a more traditionally Eastern, family-style approach: “Aahaan Kap Khao,” or food meant to be shared and eaten with rice.

Hawker Fare will continue to serve its established lineup of rice bowls for lunch.

Despite the move away from the rice-bowl format during dinner service, rice — specifically, sticky rice — will still be at the heart of the new menu. Indeed, Syhabout told What the Fork that part of the motivation behind the change was his desire to “do right” by the Southeast Asian staple, which he feels gets a bad rap in the West, largely because most diners don’t eat it properly. The key, he said, is to hold the sticky rice in one’s hands, using it to scoop up meats and vegetables, much in the same way that Mexicans eat tortillas.

“You can’t eat it with utensils; it’s almost impossible,” Syhabout said, noting that the contact with your hand is what keeps the rice moist; if it’s left sitting on the plate, it will get hard within a matter of minutes.

Syhabout and chef de cuisine Manuel Bonilla have added several new dishes for diners to eat with that sticky rice, such as Yum Khai Dao (fried-egg salad) and Laab Nuea Diep (beefsteak tartare), while reformatting others to fit within the family-style concept. For instance, the Gai Yang is now a grilled half-chicken (instead of the boneless chicken on the lunch menu), and the sausage entrée now features a Northern Thai-style pork sausage with lots of fresh turmeric and herbs, served in its casing — again, a different sausage than the one served at lunch. There will also be occasional dinner specials, like a fried whole fish served Thai style with tamarind sauce. Check out the link to the full menu below. 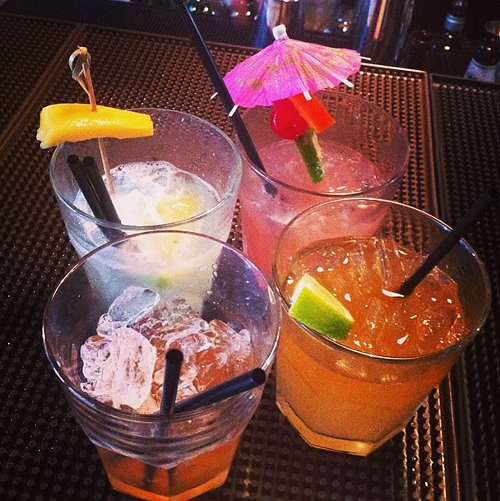 According to Syhabout, another reason for the change was his desire for Hawker Fare to become more of a festive “hangout spot” at night, not just a place to grab a quick bite. Toward that end, the cocktail menu has also been revamped — courtesy of Box & Bells bar manager Christ Avialiotis — with a new emphasis on punches and tiki drinks, as a nod to a time when Oakland was home to several of the best tiki bars in the country.

Three years after opening, Hawker Fare has remained a popular fixture in Uptown with a menu that, up until now, has changed very little. As the adage goes, If it ain’t broke, why fix it? Syhabout, for his part, cited a desire to keep things fresh and to avoid stagnation.