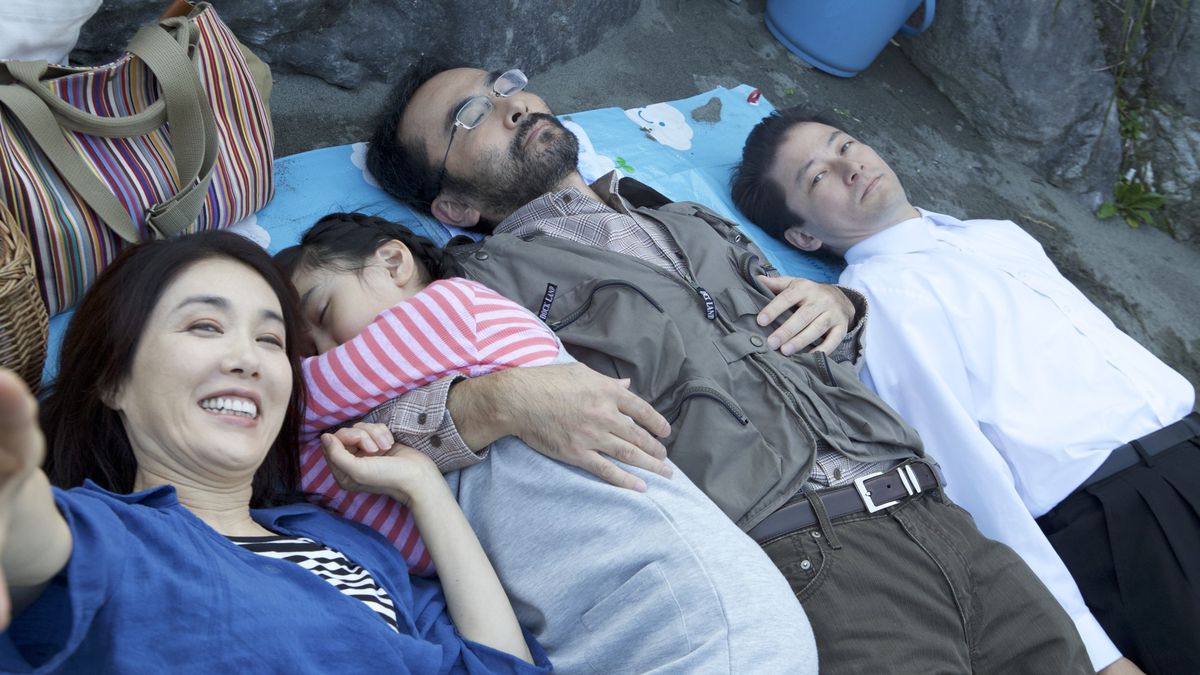 From the moment we first glimpse them, it’s obvious there’s something wrong about the family in Harmonium. Toshio (Furutachi Kanji), husband of Akié (Tsutsui Mariko), runs a machine shop in the garage of their metro Tokyo home. Their young daughter Hotaru (Shinokawa Momone) is an ordinary elementary schooler. But Toshio barely acknowledges the existence of his wife and child.

While Akié and Hotaru chatter amiably at meals, the head of the family mopes silently at the table. When Akié takes the time to talk to her daughter about such things as the curious habits of baby spiders – they eat their mother – Toshio is elsewhere. The baby spider story would be an innocuous bit of dialogue in a typical family-based drama, but here, in the midst of this uncomfortable ensemble, it makes our arm hairs stand up. Something is off. Even Akié and Hotaru’s Protestant faith appears odd, perhaps because Toshio does not join in (Christians are a tiny minority in Japan, where most people practice Shintoism, Buddhism, or a combination of the two). More to the point, Toshio is impatient and dismissive with his wife, and takes little interest in Hotaru’s attempts to play the harmonium.

Into this uneasy nest one day comes Sotaro (Asano Tadanobu), a gaunt, strained-looking man whom Toshio introduces as his childhood friend, right before he invites the stranger to share the family home and help him at work. Sotaro has just been released from prison, where he spent eleven years for murder. It’s clear that, in some as yet unspecified way, Toshio knows more than he’s telling about his long-lost buddy. Akié is not pleased with the new live-in employee. Sotaro’s prison-style manners are inappropriate, and there’s something eerie about his interest in young Hotaru and her harmonium lessons. One afternoon, chatting with Akié about Toshio, Sotaro casually explains to her that “I know every crease in his ass.” An unsettling situation has now taken an even more sinister turn.

In the first third of Fukada Kôji’s exhilaratingly strange melodrama, “normality” is hastily established only to be brushed aside by a menace that asserts itself in increments. This family is poised for a descent into hell, and yet at first they appear so transparently “happy.” The telltale character tics in the opening scenes cast long shadows, especially as we compare Fukada’s unhappy story to those of his Japanese contemporaries.

In the cinema of Koreeda Hirokazu or Kurosawa Kiyoshi, for instance – not to mention the nightmare scenarios of Miike Takashi – there is no such thing as a completely benign family situation. Everyone has a terrible secret to hide. So we react apprehensively when we witness the awkward male bonding between Toshio and Sotaro, or the disturbing way that Sotaro eyes little Hotaru. Based on what we’ve seen from filmmaker Fukada’s Japanese colleagues, we know that innocent little personality traits can balloon into madness. We expect the worst, and we get it.

A few comments on the cast: Actor Asano deserves the lion’s share of the credit for setting the chilling mood with his portrayal of Sotaro. Where his former partner in crime, Furutashi’s Toshio, keeps his guilt under wraps, vengeful ex-con Sotaro lets his freak flag fly, mostly by just standing still, in a remarkable combination of creepy body language and the expression of a man unhinged. The glue that holds this sad little group together, however, is Tsutsui’s Akié. Acting with her eyes, the woman takes a long and painful journey, far past the borders we recognize when the story opens.

Writer-director Fukada, whose previous films Au Revoir l’Été and Hospitalité delved into troubled relationships, makes the vertiginous horrors of the ironically titled Harmonium seem the logical outcome of a set of predetermined impulses. It shocks us long after we walk out of the theater, not with the short-lived scare of a jump cut or grisly image, but with something darker that lives quietly in the unexamined places of the soul.

Previous ArticleCity of Oakland Poised to Give Public Land to Nonprofit that Improperly Received $710,000 in County Funds