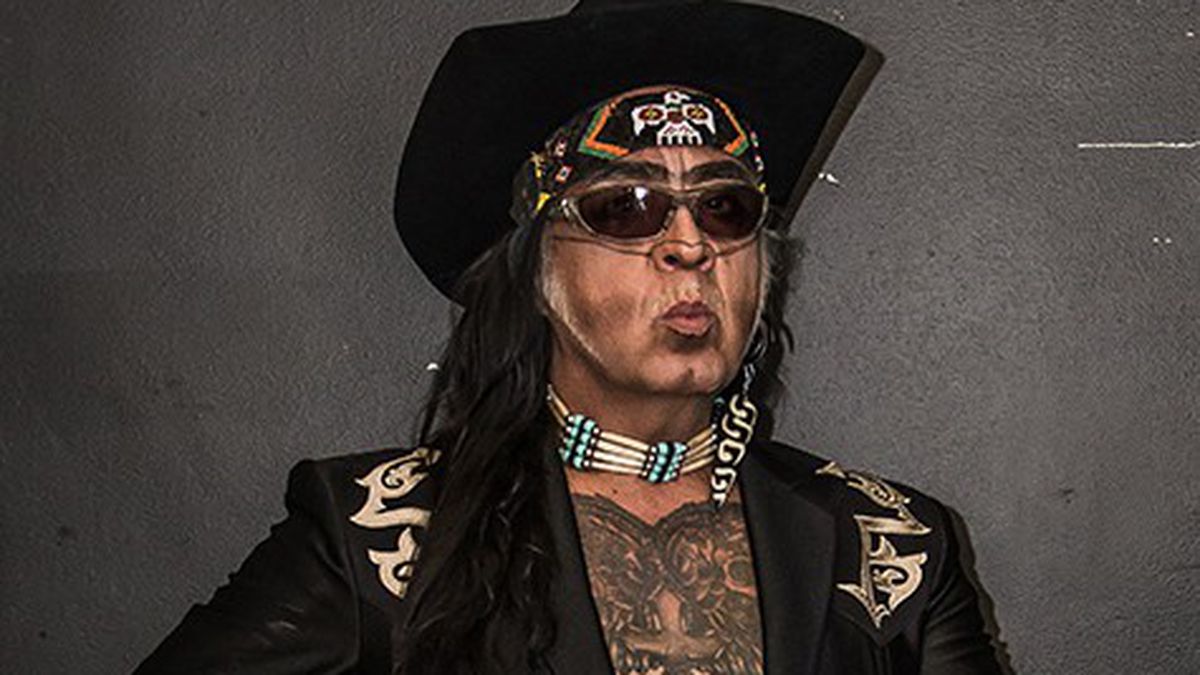 While introducing Guillermo Gómez Peña last Friday night, UC Berkeley professor Laura E. Peréz rattled off a list of descriptors — among them “warrior poet.” When the internationally acclaimed performance artist finally took the stage, his personal introduction was similarly sprawling. Among his many titles were “linguistic tightrope walker” and “mariachi with a big mouth.” And he offered many names for the performance space as well, exclaiming, “Foreign audience, welcome to my border zone.”

Roaming introductions are the only ones that begin to suffice when referring to Gómez Peña. The seminal Chicano artist is famous for deconstructing boundaries and borders, verbally pulling assumptions out from under the audience’s feet. He defies all categories — race, gender, class, genre, and citizenship. And, from the center of a stage, he can transform an entire room into an ambiguous in-between zone that both alienates and traps his audience.

Gómez Peña wore a mixture of social signifiers for the show, a spoken word monologue called “Imaginary Activism: The Role of the Artist Beyond the Art World” at Cal’s Durham Theater. Cowboy boots, a skirt, a thick waistband, and sunglasses made up the core of his look, plus the long, black hair that fell to either side of his tattooed face. But his table of props offered endless permutations, as he continuously changed his image throughout the performance.

In his subject matter, too, Gómez Peña pays no respect to categories. “Invisible Activism” included a letter to the governor of Arizona (with a cc to Donald Trump and all other 2016 presidential candidates) in which he satirically suggested that all Spanish names should be eliminated from the English language as spoken by Americans. Every city, state, food item, car model — Los Angeles, California, margarita, Camaro — adios. In another portion, he broke down the word “academia,” and the elitism that comes with it. Zealously riffing off the root in both English and Spanish, Gómez Peña turned it into “academystic” and dozens of other twisted contradictions. And later, he imagined a dystopian future in which neo-liberals rule the world and subversive speech becomes haphazardly censored as soon as it leaves an activist’s mouth. This portion of the monologue masterfully devolved into fragments of words suspended between silences as the artist’s mouth moved emphatically, yet no sound escaped.

Gómez Peña breathed heavily through each of his segments, gesturing ecstatically with his hands like a shaman invoking his ancestors — an evocation undoubtedly meant to question the archetype it calls upon. He strutted around the stage in a manner that revealed his experience. At nearly sixty years old, he’s been performing for decades.

Gómez Peña is most famous for “The Year of the White Bear,” a 1992 series of performances for which he and fellow artist Coco Fusco traveled the world for two years pretending to be “indigenous” people recently discovered on a fictional island off of Mexico. Like that famous stunt, most of Gómez Peña’s work is both cleverly comedic and heavily political, always wavering between satire and sincerity in a way that renders the entire notion of authenticity defunct. Today, Gómez Peña is the director of the San Francisco-based trans-disciplinary arts organization La Pocha Nostra, an anti-essentialist, anti-nationalist team of performing rebels.

Stephanie Sherman, a graduate student in UC Berkeley’s Theater Dance and Performance Studies department, met Gómez Peña on a plane about a year ago. He asked her why no one at the school had invited him to perform lately — his last appearance at Cal was nearly a decade ago. So Sherman made it happen. She and co-organizer Marco Flores fundraised for months to front the bill, eventually gathering the money from a long list of departments that cared enough to contribute what little they could spare. Sherman and Flores were determined to make the performance free and open to the public. When the RSVP link went live, the 140 tickets were reserved within 20 seconds.

But the majority of the organizing actually went into preparing for the intimate workshop that Gómez Peña taught for 24 devoted students — eight UC Berkeley undergraduate students, eight graduate students, and eight community members — which took place over Labor Day weekend. Nearly eighty applicants competed for the spots in the rare, free workshop with Gómez Peña and others from La Pocha Nostra. Ultimately, students chosen by the admissions committee were those for whom Gómez Peña’s work is a beacon of radical influence in a whitewashed discipline.

I met Sherman before the show to ask why she would donate so much time and energy into making the artist’s visit happen. She said, among many things, that there was a need to bring a voice like his to campus, to shake up the undergraduate curriculum and challenge students’ concepts of the lengths that performance can go. “His work is theory and practice, it’s decoloniality embodied, and it’s not theater,” said Sherman. “I think that that is going to be very, very inspiring — especially for students who have felt somehow excluded from the canon, to see that this is what you can do with your art.”

Maison Bleue In Berkeley Brings On Traditional French Fare … And...