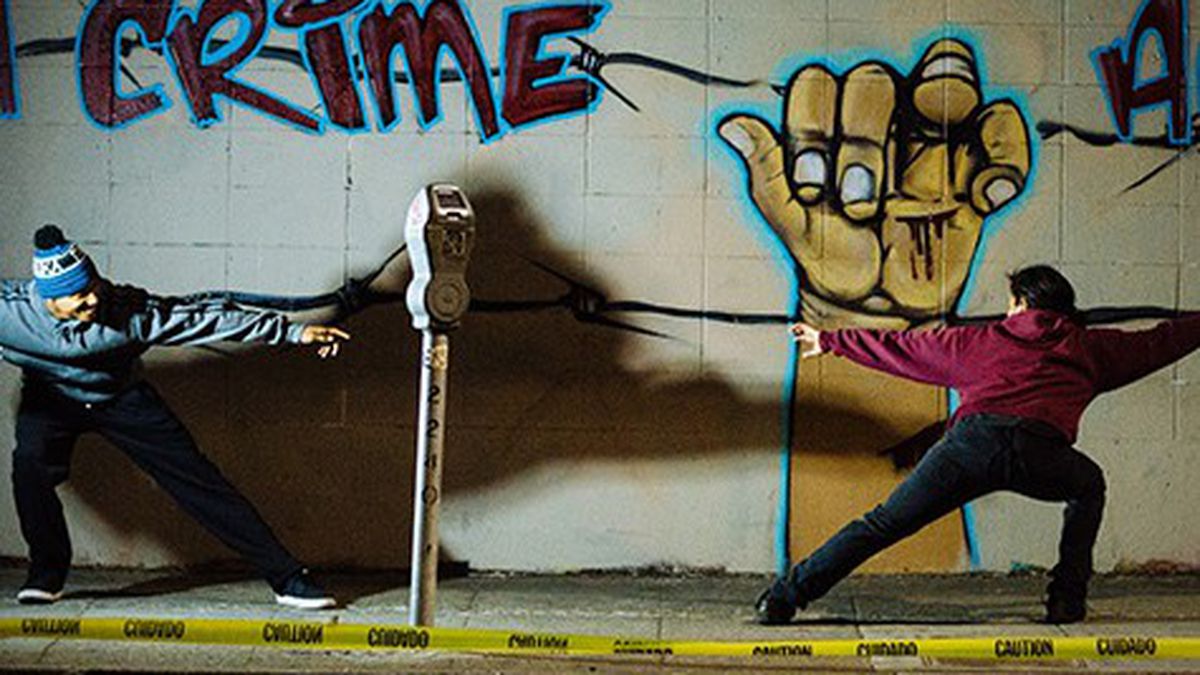 NAKA Dance Theater and EastSide Arts Alliance trace the connections between border violence and police brutality for their newest incarnation.

At EastSide Arts Alliance (2277 International Blvd., Oakland), row after row of taut, white string stretches across the space, creating a permeable, diagonal barrier in the middle of the room. Four tiny contact mics are attached to the string so that sound is emitted whenever it’s touched or pulled. The installation functions as a focal point for one of the scenes in The Anastasio Project, a collaborative production between EastSide Arts Alliance and NAKA Dance Theater.

The Anastasio Project was initially sparked by the events of May 2010, when Anastasio Hernandez-Rojas was beaten and killed by several border patrol agents as he attempted to return to his wife, Maria Puga, and their children in San Diego. “The topic is so charged and so heavy that I’m not interested in just showing the exact story or the video of these horrific experiences,” said Kajiyama in a recent interview. “I’m interested in the movement and how we find some way to heal and go through it.”

The show has developed since last year to include updated versions of events involving police brutality against Black people, and takes into account ongoing political debates on immigration reform. The research-intensive production process is driven by a belief that through greater knowledge of the inner workings of US Immigration and Customs Enforcement (ICE), the police, the FBI, and the military, affected communities will be better prepared to hold them accountable. Kajiyama and Navarrete have traveled to San Diego twice with their group of performers — once to meet with Maria Puga, and again more recently to attend a protest in solidarity with her and many other families who have lost relatives to the violence of US Customs and Border Protection agents.

Three of the six shows will be preceded by community forums on the complexities of state violence, featuring talks with experts from various backgrounds — a new component added this year. “We hope to create a platform for organizations that are already doing [anti-brutality] work,” said Navarrete. The first forum (Sept. 12) will spotlight four families and Birdie Gutierrez, an organizer based in San Diego who is working to uplift the voices of migrant families that have been impacted by border patrol brutality. The Latina women’s group Mujeres Unidas y Activas will also join the conversation. Black Lives Matter organizer Cat Brooks from ONYX and the Anti Police Terror Project will lead a discussion on the epidemic of violence against Black Women in the United States for the second set of talks (Sept. 13). And for the third forum (Sept. 19), Matt Gonzalez of the San Francisco Public Defender’s office will facilitate a conversation on contemporary immigration issues, together with Mujeres Unidas. In the context of current presidential campaigns, and the ever-growing Black Lives Matter movement, The Anastasio Project is sure to pose new questions and present a fresh perspective.