To celebrate its new mobile adoption center, Berkeley Humane threw an extravagant celebration with meme mascot as the guest of honor. 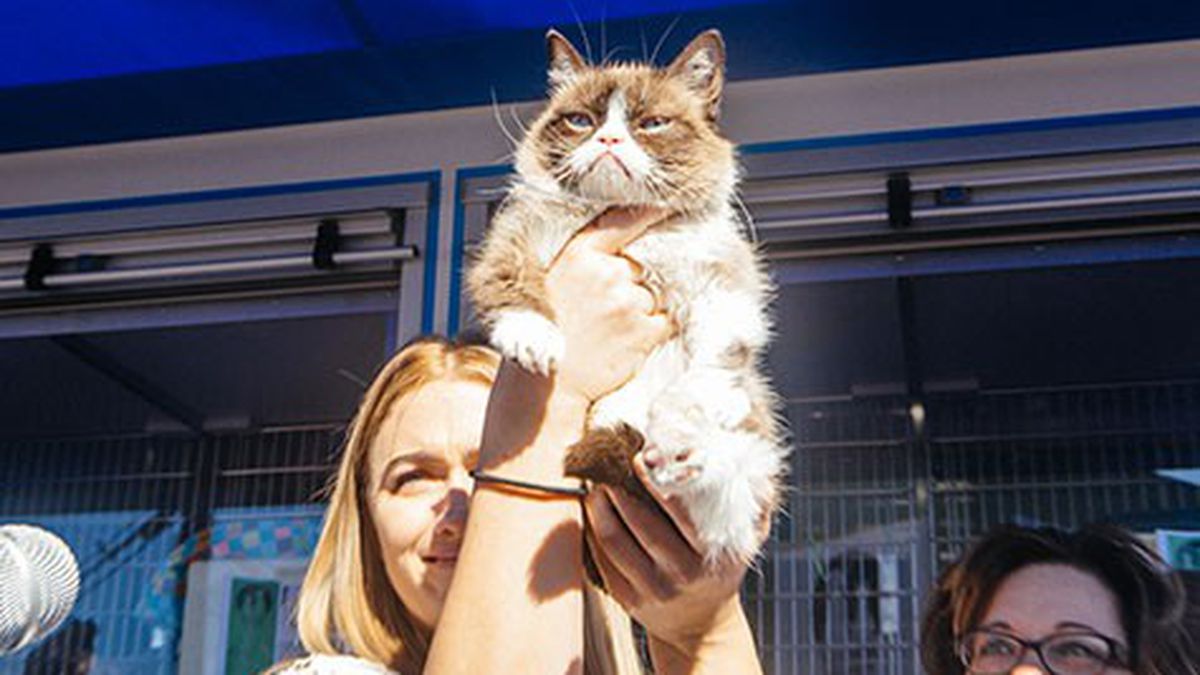 This past Saturday, hundreds of eager fans gathered at the Berkeley Humane to meet an international celebrity. At exactly noon, an entourage of police on motorcycles revved their way into the crowd, clearing a path for a shiny, black Escalade. The audience erupted with the sound of shutter clicks as the guest of honor, Grumpy Cat, was escorted to the stage.

The event was the ribbon-cutting ceremony for Berkeley Humane’s new mobile adoption center (MAC for short), a 26-foot-long converted RV that houses four rows of built-in kennels. Once Grumpy Cat was on stage, several city officials proceeded to speak in gratitude to both Grumpy Cat and Berkeley Humane, presenting each with official certificates of recognition from the city. All participants then cut the red ribbon in celebration, the doors to MAC were opened, and Grumpy Cat was held in the air for all to photograph.

For the unacquainted, Grumpy Cat (whose real name is Tardar Sauce) is an internet celebrity famous for her perpetually dissatisfied expression — really, her face just happens to be shaped that way. After photographs of the cat’s adorably angry mug were shared online, her image went viral, and she became the face of thousands of disapproving memes.

Now, Grumpy is not only an internet icon, but an author as well (“model” is probably more accurate). To celebrate the release of her new book, A Grumpy Guide to Life, Chronicle Books launched the Grumpytown USA Contest last August, challenging people across the country to devise the most epic gesture of love for Tardar Sauce. The person with the most impressive proposal would be graced by a visit from the curmudgeon herself.

Despite fierce competition, Berkeley Humane took the prize. The timing worked out perfectly, because the animal shelter was just gearing up to inaugurate MAC. Humane staff rallied support from the Berkeley police, the Mayor’s Office, and the Berkeley Chamber of Commerce to create a proposal for the event.

Berkeley Humane executive director Jeffrey Zerwekh said that they were hopeful of winning, but were nonetheless surprised when they came out on top. Grumpy’s owners told Zerwekh that they chose Berkeley Humane because they loved the mission of saving animals and placing them in homes, as well as MAC as an innovative tool for achieving that goal.

MAC was custom-built for Berkeley Humane. The vehicle has an extendable awning, so that extra kennels can be packed in for the drive, then set up outside for the day. MAC will allow Berkeley Humane to travel to various events, and set up outside near stores or parks, so that people don’t always have to come to them. With that increased visibility, shelter staff are hoping to get even more animals placed in homes.

On Saturday, attendants lined up to walk through the mobile adoption center and view the cats that lounged inside. They also formed a massive line to take individual photos with Grumpy Cat, and enjoyed refreshments from Whole Foods. The line was long, but few people appeared grumpy.

The extravagant event was the cherry on top of Berkeley Humane’s best adoption year ever. In 2014, it adopted out 1,030 animals, the highest number in its 88-year history. The feat is all the more impressive considering that the center is currently working out of one-fifth of its usual adoption capacity, because of a devastating fire in 2010. Because the center still has its own fully functioning animal hospital, which has been dedicated to serving only homeless animals since 2009, its practice is to take in animals from other facilities with challenging medical cases that might not otherwise get a chance. “The dog that needs an eye surgery, or the cat that needs expensive dental surgery,” said Zerwekh, offering examples. “So when we talk about our service to over a thousand animals, they are sometimes the ones that need the help most.” Soon, Berkeley Humane will be launching a capital campaign to raise funds to rebuild its facility. During the construction, MAC will be its sole adoption center.

“Come to see Grumpy Cat and you can go home with your own cat!” Zerwekh said, prior to the event. Although the celebration created excitement around Grumpy Cat and MAC, Berkeley Humane’s unwavering mission was at the core of the event. Some of the happiest attendees were those walking dogs around the block, giddy with the excitement of meeting their new pet.

In a clever convergence of viral internet meme culture and real life animal services, Berkeley Humane successfully poised Grumpy Cat as a matchmaker for many homeless animals that day.