Squadda B of Main Attrakionz, Arkansas OG Pepperboy, and experimental producer Ian Taggart of Blue Sky Black Death come together as an unlikely yet formidable trio. 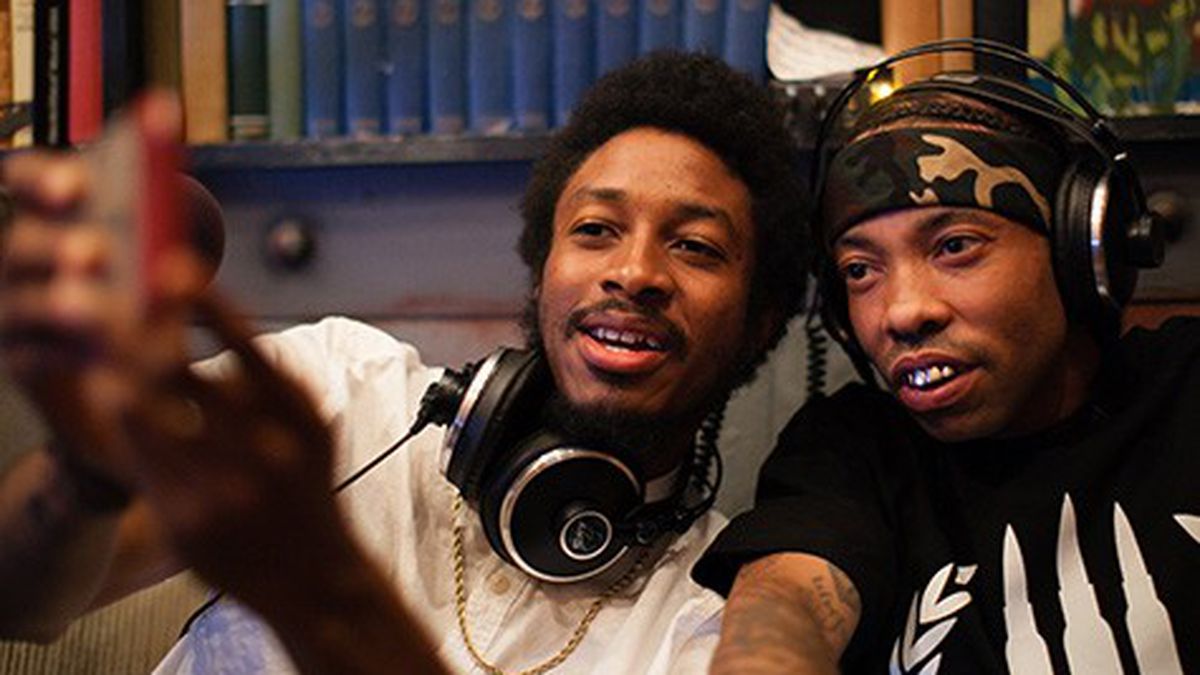 When Pepperboy walked into The Legionnaire last week for the hip-hop dance party Sprung, whispers of “Is that Pepperboy?” immediately began to drift throughout the Oakland bar. The 38-year-old underground rapper from Little Rock, Arkansas, is an unlikely person to have a fan base in the Bay Area. But thanks to influential locals who have championed his work, he has acquired a devout following here in recent years — even though he’s from a city that’s often overlooked in the national hip-hop conversation.

“There’s no light on Little Rock. I don’t know no A&Rs checkin’ for us or anything; no labels. We have to take flights. I’m just blessed these guys reached out to me,” said Pepperboy in an interview, gesturing towards rapper Squadda B and producer Ian Taggart, who were seated beside him. The three artists, who now form the super group Green Ova South, sat in the upstairs of a warehouse studio complex in San Francisco’s Mission District, where they hosted a private release party for their new album, Kome Ryde With Us, two weeks ago.

Kome Ryde With Us by Greenova South

Over the past several years, Squadda gained renown as part of the Oakland rap duo Main Attrakionz, and he first heard Pepperboy’s music through Oakland writer Andrew Nosnitsky’s well-known hip-hop blog, CocaineBlunts.com (which he has since discontinued). After poring over Pepperboy’s extensive mixtape catalogue, Squadda reached out to the elder MC online in 2012 — less than a year after Main Attrakionz’ landmark album, 808s and Dark Grapes II, spurred a wave of hip-hop with washed-out, melodic production that bloggers later dubbed “cloud rap.”

Cloud rap has psychedelic undercurrents and digitized aesthetics that have more in common with various ambient electronic subgenres than with traditional hip-hop beats. Around the time of its inception circa 2011, it became popular among youth who grew up online and were just starting to come of age. While Pepperboy’s early work had a hard-edged, g-funk sound and lyrics that spoke to the struggles of inner-city Little Rock, he became an unlikely part of the cloud rap movement. His idiosyncratic flow — which often comes off as a wistful, whispery falsetto with a sing-song cadence — caught the attention of key cloud rap producers such as Blue Sky Black Death (Taggart’s production team) and Clams Casino, the latter of whom has production credits on 808s and Dark Grapes II.

After a stint behind bars for a firearm charge, Pepperboy turned the focus of his lyrics from touting a hustler’s lifestyle to uplifting messages about coping with trauma. And after his 2012 single “Felon,” which Blue Sky Black Death produced, made its rounds online, the Little Rock street prophet quickly accrued a cult following of Bay Area youth.

Before long, Pepperboy was making regular trips to Oakland to record, crashing with Squadda at his mom’s house just South of the Berkeley border. Around that time, Taggart (who also goes by Young God) had moved to Oakland and began to work with Pepperboy, as well. Taggart started Blue Sky Black Death with fellow producer 88 ULTRA in San Francisco in the mid-Aughts, but the project really gained traction when the two collaborators moved to Seattle in 2010. Taggart, who is now 31 years old, moved back to the Bay Area in 2012 and, subsequently, Blue Sky Black Death went on hiatus.

Squadda, Pepperboy, and Taggart fondly described working together that year, and they said that though they had stayed in touch in the years that followed, they only began pursuing a more in-depth collaboration again this year. At the beginning of 2016, they announced the debut of Green Ova South. And Kome Ryde With Us, their album that came out on Squadda’s 25th birthday last week, highlights its members’ greatest strengths.

Squadda is an artist who thrives on collaboration, and Green Ova South came together just as his most significant creative partnership, with fellow Main Attrakionz member MondreM.A.N., began to dwindle. The formation of Green Ova South also coincided with a major change in Squadda’s life — one that also had much to do with Main Attrakionz fading from the spotlight: The duo was heavily abusing alcohol and drugs, Squadda confessed, resulting in missed opportunities and botched performances. Earlier this year, Squadda decided to get sober.

“Your mind is hella clear. You Jay Z-ed the whole album: You didn’t write anything down,” said Taggart supportively, holding space for his collaborator’s difficult admission.

And while he wouldn’t get into details, Squadda said that he and Mondre are still tight as ever (they grew up like brothers), but are taking time apart to pursue separate projects.

Though the release of 808s and Dark Grapes III was met with much fanfare last summer, Main Attrakionz never quite replicated the success of the album series’ second installment in 2011. But working on Kome Ryde With Us reinvigorated Squadda as a rapper. He, Taggart, and Pepperboy recorded the eclectic project in quick takes over the past year during Pepperboy’s visits to Oakland. And while cloud rap is regarded as a borderless subgenre that thrives on the internet (as opposed to being a regional style), somewhat surprisingly, the three musicians said that what they bonded over most was their love for early-Nineties Southern rap.

“The South is the shit, been the shit, will be the shit,” Squadda enthused.

All three artists’ faces lit up when Pepperboy brought up New Orleans rapper and mogul Master P, his longtime hero. That was why they decided to name the super group Green Ova South, they explained — both as an homage to the region, and as a gesture towards the national expansion of Green Ova, the larger music collective Squadda and Mondre started in Squadda’s North Oakland childhood bedroom.

Over Taggart’s celestial production, with its shimmering keys and euphoric synth melodies, Squadda and Pepperboy narrate tales of struggle and redemption throughout Kome Ryde With Us. Here’s a story of glory on the concrete, declares Squadda on “Keep My Head Up,” the opening track. Similarly, the rest of KRWU is filled with insightful observations in the form of offhanded quips and understated poetics. “Tears in My Eyes” is a particularly powerful track: It’s a five-minute eulogy to friends, family members, and cultural icons who have died. In it, Squadda and Pepperboy deliver back-and-forth homages to a long list of folks, including Squadda’s grandfather, A$AP Yams, The Jacka, and Matthew Africa, a popular Oakland DJ who was killed in a car crash several years ago.

The project contains features from 2 Lettaz of the Nineties Alabama rap group G-Side, whose gravelly style evokes Atlanta heavyweight Young Jeezy; and underground Memphis rapper Mr. Sche, whose booming voice has a similar resonant quality to that of Biggie’s. These rappers add an old school element to the project — a surprising juxtaposition with production that feels like it belongs to the virtual world more so than to a specific region.

“We’re all into the album-driven listening experience when everything is so single-driven,” said Taggart. “We’re not trying to do anything that’s super trendy right now. We’re trying to make it current, but also nostalgic. … We’re not just trying to rehash old ideas.”