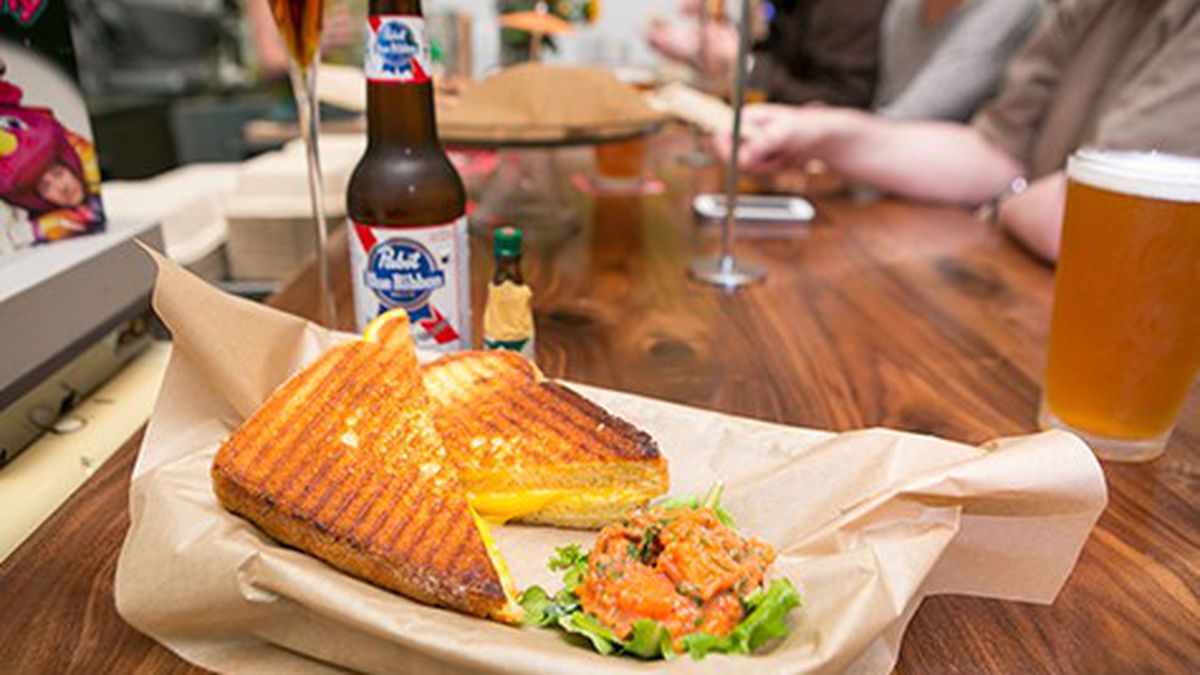 At Analog, a pint-sized new bar in downtown Oakland, the walls are lined with old VHS tapes, one of which plays silently on the cathode-ray-tube television overhead. A jukebox is loaded with 45s, and a Nintendo console is set up with the original Duck Hunt “zapper” gun.

Welcome to 1982 — or, short of that, to a bar that celebrates the simple pleasures of those bygone times.

It feels appropriate, then, that the food and drink selection is similarly simple and unfussy. The place is co-owned by Arianna Alcala and Sean Asmar, the chef, who is also the proprietor of Bender’s Bar and Grill, a punk rock dive bar in San Francisco. Analog serves eight craft beers on tap (the usual West Coast suspects), along with Miller High Life and Pabst Blue Ribbon — no fancy cocktails here. Food-wise, the menu is mostly limited to a selection of about ten sandwiches, all served on slabs of Acme focaccia.

Perhaps the most notable thing is how many of those sandwiches don’t have meat. While vegan eateries are experiencing a resurgence in the East Bay (see “The Vegan New Wave” in this week’s Taste special issue), it’s still hard to find a restaurant — much less a bar that’s open until 2 a.m. most nights — that gives vegan and “omni” options an equal amount of menu space. In keeping with the analog theme, Asmar organizes his menu as though it were two sides of a cassette tape or a 45, and, lo and behold, Side A (“Fine Young Carnivores”) has the same number of sandwiches as Side B (“Like a Vegan”) — a rare instance when vegan diners don’t get the short end of the stick. And unlike most of the so-called B-sides put out by record producers of yore, Analog’s vegan “B-side” is arguably the more interesting side.

You don’t have to be vegan to bow down to the glory of a sandwich Asmar has dubbed “The Young and the Breastless,” probably the finest vegan sandwich I’ve eaten in recent memory. (If you have an appetite for punny pop culture references, you’ll never leave Analog unsated.) To describe this as a veganized buffalo “chicken” sandwich doesn’t do justice to the sublime combination of soy-based “chicken” strips, Frank’s hot sauce, vegan ranch dressing, citrusy cabbage slaw, and well-toasted focaccia. The sandwich was rich, boldly spiced, and flavor-packed without being overly wholesome or precious — in other words, the opposite of every negative stereotype about vegan food. It didn’t hurt that the featured protein — Beyond Meat “chicken-less chicken strips” that Asmar grilled until they formed a crisp, caramelized, almost cheese-like crust — was tasty enough that, trite as it sounds, I didn’t miss the chicken at all.

Then there was “The Rachel,” Asmar’s vegan take on a corned beef Reuben, whose star component was house-made seitan (basically a big ball of spongy wheat gluten) sliced thinly on a deli slicer, then served up hot with vegan chipotle lime aioli and more of that citrus slaw. The seitan had a slight smokiness and was redolent of soy sauce — it was surprisingly enjoyable even if it bore little similarity to anything you’d find at a traditional Jewish deli.

Asmar said he’s proud that Bender’s became known for being a vegan hub, and he’s started to create the same vibe at Analog, where he serves Timeless coffee (from the Oakland-based vegan roastery and cafe), hosts a Monday night vegan pop-up featuring the Hella Vegan Eats food truck, and recently added gluten-free vegan tacos to the menu. Soon, he wants to add a vegan Sunday brunch as well. Asmar isn’t vegan, but a lot of his friends and customers are, and he said he loves how much more freedom and creativity he has when he cooks vegan food. “There aren’t that many rules,” he said.

The limitations of the bar’s tiny, modestly equipped kitchen (no deep fryer, no real stove) mean that Asmar’s tater tots — perhaps the most popular item at Bender’s — didn’t make it across the bay. Instead, all sandwiches come with a side of sweet-potato salad, which was pleasant enough, but I’ll admit that a menu so heavy on beer and sandwiches does give me a wicked craving for fried food. During my visits, the only other section of the menu consisted of two salads: the “Beets By Dre,” which featured herbed goat cheese and thin rounds of flash-pickled beet (a subversion of the old beet-and-chevre-salad cliché), and a mixed-greens salad that I liked better because it had the same beets in more of a supporting role — bright-tasting and pleasantly crunchy as they were, there are only so many beet pickles I want to eat in one sitting. In any case, Asmar has since consolidated the two salads, so the point is likely moot.

Oh, and lest I make it seem as though Analog is strictly a vegan establishment: The sandwiches with meat in them weren’t bad either, though perhaps not noticeably better than what you can find at other food-focused bars. The “Roast Beast” will appeal to anyone who likes the idea of Boursin-like house-made herbed goat cheese. The roast beef was just a decent store-bought variety, but the contrast between the hot, toasty foccacia and the cool deli meat and cheese was somehow very pleasing. The “Miss Piggy,” on the other hand, was a better-than-average barbecue-style pulled pork sandwich — the pork shoulder roasted slow and low over at Bender’s and slathered in a sweet barbecue sauce.

My favorite sandwich on the non-vegan side of the menu was also the simplest and least expensive: the Poor Boy ($5), a straightforward, and utterly satisfying, grilled cheese sandwich — just Texas toast, butter, and American cheese — as classic as a 45. For $9, the grilled cheese comes with your choice of High Life, Pabst, or Legit Lager, plus a shot of Underberg to wash it all down.

As for the analog theme, at least during my visits the old records and VHS tapes functioned more as a design element than anything else. When it’s full, the bar is too tiny for customers to move around much to really dig into Asmar’s collection, and I felt too self-conscious — surrounded by tattooed, cooler-than-me types — to turn on the old 8-bit Nintendo system (loaded, temptingly, with one of the Super Mario Bros. games).

Still, it was comforting to hear the crackle at the start of a fresh record, and Asmar said a lot of customers have been drawn to the business because of their own interest in various old-school entertainments. Eventually, he wants to host record swaps and other events of that nature.

Late on a Saturday night, the stretch of downtown Oakland that Analog calls home felt like a microcosm of the city’s vibrant cultural diversity. Walking down a single block of 14th Street — the smell of marijuana wafting in the air — we passed, in quick succession, a funky little art gallery, a bar that was hosting a heavy metal show (death growls in full effect), and a nightclub playing hip-hop. Smack in the middle of all this sits Analog, a haven for record enthusiasts, movie buffs, vegans, office workers on their lunch break, and nostalgia peddlers of all stripes. The place fits right in.