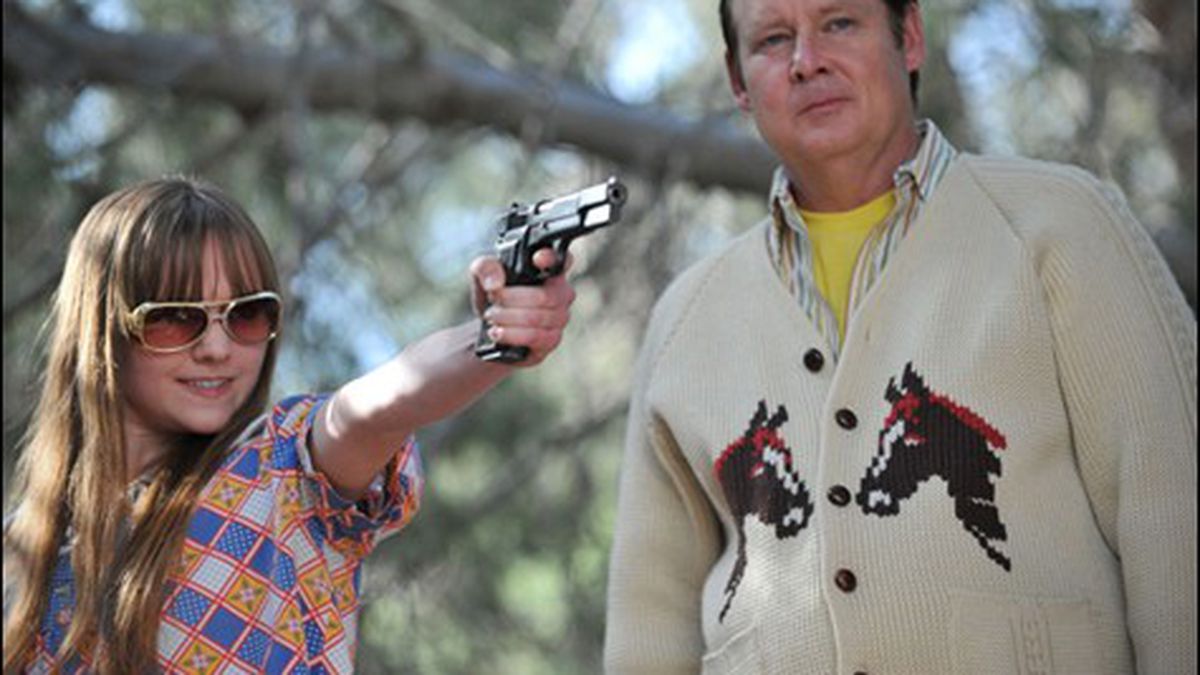 Frank Murdoch watches too much television. As he sprawls helplessly on his living room sofa, the programming beats down on his noggin like a headache hammer: trashy “reality” shows, rightwing frothers, goonish amateur contests, shrill commercials, etc. It’s not as if middle-aged Frank (played by Joel Murray of Mad Men) doesn’t have anything else going on his life, though. His ex-wife and spoiled daughter can’t stand him, he quarrels with his obnoxious work mates at Mutual of Onondaga, and his doctor informs him he has a brain tumor, but not to worry because nothing can be done about it. But Frank knows there’s a remedy for all this. He’ll get a gun. He’s mad as hell and he’s not going to take it anymore.

Ten minutes into God Bless America we surmise that Bobcat Goldthwait, the veteran standup comic turned filmmaker, has been watching a little too much TV himself. Just from the title we know we’re in for a rough ride. Writer-director Goldthwait sets Frank on a course that’s extremely difficult to travel with any sort of narrative credibility. Think of Falling Down, Taxi Driver, Jackie Brown (stolen dialogue), Patton Oswalt’s Big Fan, Mike Judge’s Idiocracy, and Bowling for Columbine, for starters. As “weird drifter guy” Frank cruises the USA shooting whiners and bullies, he turns into a grumpy male version of the Kathleen Turner character in John Waters’ Serial Mom. Only instead of popping off housewives who don’t bother to recycle, Frank sets his sights on people who won’t shut up in a movie theater and one Steven Clark (Aris Alvarado), the supremely untalented winner of the American Superstarz talent show.

Thirty minutes in, and already we’re tired of it. Don’t blame Murray, younger sibling of actors Bill Murray and Brian Doyle-Murray. He has the baked-potato face and affable, slow-burn manner of the guy in the next cubicle. Next to D-Fens and Travis Bickle, he’s Mr. Congeniality. Yep, broadcast TV is pretty stupid. When Frank complains that there are “so many horrible people in the world” and says, “Everything is so cruel now, I just want it all to stop,” we can relate, to a point. It so happens that Frank is pissed off at the same things The Three Stooges were in their recent Farrelly Bros. movie, except that instead of slapping or throwing food at someone he hauls out an AK-47. The Farrellys made sure to include a disclaimer reel at the end of their film, to warn kids not to try this at home. No such warning for God Bless America — maybe that type of PC disclaimer is another one of the things that irritates Goldthwait.

Growller with Trails and Ways

When the time comes for Frank to find a sidekick, the movie insists that somehow a high-school girl named Roxy Harmon (Tara Lynne Barr) suddenly appears on the scene and relates to him on a basic level. She’s as clichéd as Frank, pretty much a male sex fantasy (despite Frank’s careful tiptoeing), and the more the screenplay alludes to the fact (“she’s my niece”) the more awkward it looks. Why couldn’t Frank team up with, say, the zaftig receptionist at the insurance company? Answer: Because it wouldn’t be as funny as when teenage runaway Roxy blurts out that she loves Alice Cooper and hates Diablo Cody. Bobcat is a tad behind the times — Wes Anderson and Judd Apatow have plowed this field repeatedly. So has Oliver Stone, from a different angle, in Natural Born Killers.

After we throw away everything else, we’re left with the simple joys of seeing annoying tube celebs and homophobic religious haters being murdered. That’s not enough. It fails to satisfy. Goldthwait belongs to the post-Andy Kaufman school of comic sensibility, in that he can try to get away with outlandishly mawkish stuff like World’s Greatest Dad by framing it as irony. Very little in God Bless America qualifies as ironic. Murray is very good, with a perfect weary, deadpan delivery, and eighteen-year-old Ms. Barr, a TV regular, at least has the right attitude. Rage is cheap these days. God Bless America tries to undersell its competitors by showing us an angry white guy whose gripe is that “We reward the shallowest, the dumbest, the meanest, and the loudest,” a dime-a-dozen opinion. Despite a few easy laughs, it’s part of the problem rather than part of the solution.