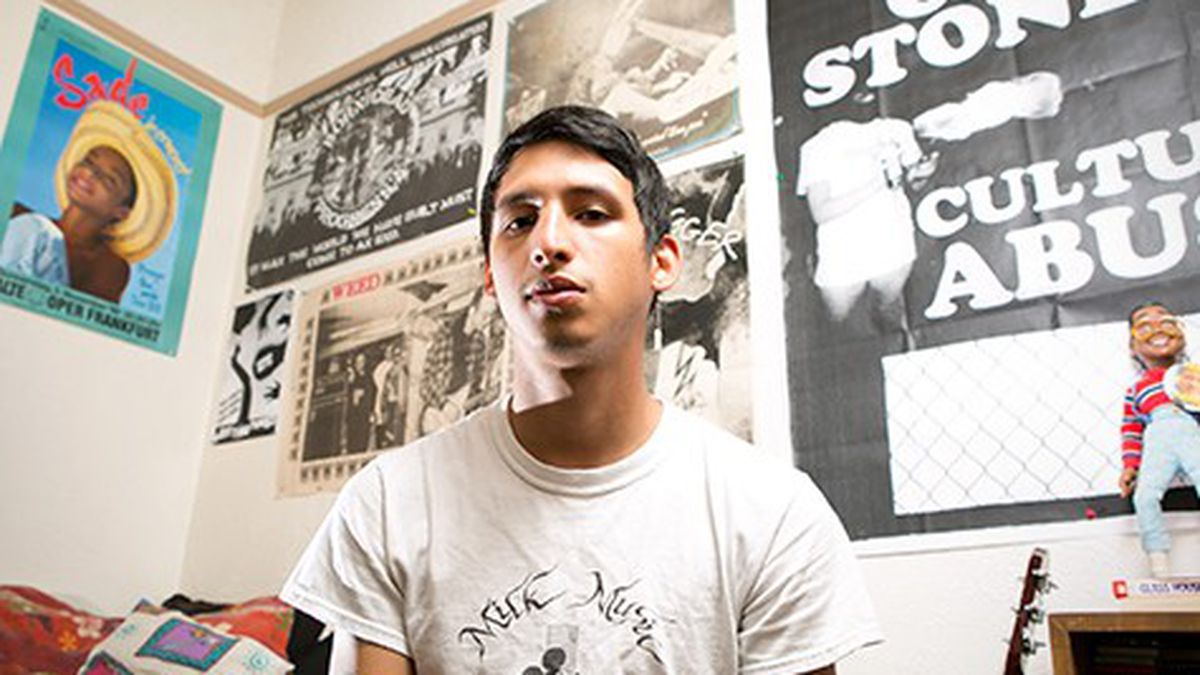 Last week, Samuel “Samuelito” Cruz set a stack of fliers on the counter of Econo Jam Records and then rifled through the rock new arrivals section. He wore one earring and a T-shirt with “Lumpy & the Dumpers” strewn across his chest. Before long, Cruz clutched records by the Nineties indie-pop duo Kicking Giant and Sinead O’Connor.

“Actually, I don’t know if I should buy these since I’m trying to get fired soon,” he said, referring to his job packing groceries for home delivery. “I have to wake up so early, and now they want to send me to South San Francisco…. I’m always staying up after shows and driving straight to work.”

For Cruz, sporting an underground punk tee and a flip attitude about his day job while yearning for O’Connor’s Am I Not Your Girl? doesn’t seem contradictory. The fliers — which bore cut ‘n’ paste text and a crude backstabbing illustration — advertised this Saturday’s record release show at Econo Jam (2519 Telegraph Ave., Oakland) for his debut full-length as Toner. Cruz operates the wispy, melancholic guitar project more like a punk band: inclined to cassette tapes with grainy, stark artwork and house shows where address inquiries elicit the response, “You a snitch?”

Precedents for punks owning pop are plentiful. Locally, it’s something of a tradition, typified lately by bandleader Tony Molina — who courts affinity for hardcore and pop predilections and happens to be headlining the Toner gig — and Flesh World, heir to Brilliant Colors. Cruz, however, is especially zealous about it: Since moving to Oakland about a year ago, he’s played on five records and recently toured as drummer for both the lumbering, solo-steeped rock group Happy Diving and noise-rock action unit Never Young.

Cruz grew up in Newark’s West End — an important distinction. “There was hella nortes and my dad kind of repped that, so it was a bit sketch,” he said, as he was about halfway through the rock section. “Everyone I knew back there is like 21 and having kids and shit so I know they’re gonna be there forever.” Cruz gestured to his bandmate, Kennan Choy, who’s twenty and also sports one earring, and added, “But he’s from Pleasanton, which is actually the worst.”

“Hey, I’m gonna have to ask you to stop talking shit about my hometown or it’s gonna get brutal,” Choy retorted. They met two years ago at a party, Choy recalled. “Yeah, we ended up passing out next to each other, using frozen fish sticks as pillows for some reason.”

After Cruz left the record store empty-handed, he bought an eighteen-pack of Tecate and headed to his nearby matchbox apartment to prepare for a house show that evening. Beneath a tapestry of punk fliers, Cruz settled into a swivel chair and brandished a big bag. “I guess we’re all gonna smoke the garbage kush,” he sighed, spilling some brackish shake onto a Happy Diving record sleeve. “Oh yeah,” he added, smirking, “this garbage record is for rolling.”

On speakerphone, Cruz assured a friend that they were five minutes away from the gig. Choy idly strummed a guitar. Cruz put on Smokey Robinson. The music aroused memories of a 48-hour psychedelic episode not long ago, which involved the illusion that his room was actually a barren desert and that he needed to piss out the window. Choy added, with less enthusiasm, that Cruz was incoherent and struck with terror, then tended to his phone.

“This girl from Antioch hit me up and said she wants to smoke me out and come to the show,” Choy shared. “So I guess I’m going to go pick her up from BART.” That prompted a debate about whether Cruz should be around for the fateful meeting. They agreed to drop him off first. Cruz collected a bag of frozen ribs, a baking pan, three Toner LPs, the case of beer, and his guitar. On the way to Choy’s car, he dropped most of the items at least once.

Finding the show at a vague West Oakland intersection wasn’t hard. The circle of white dudes sipping 40-ounce beers out front gave it away. In a tiny backyard, the first band fiddled with a bass cabinet that stood as high in the fence. From inside the home, Cruz shouted about preheating an oven and emerged gripping ribs in time for a barrage of cymbal and feedback. A neighbor paid a visit from halfway down the block to complain that his television set was being drowned out by the noise. So the crowd of fifty squeezed inside the house, after living room couches traded places with gear. Toner set up and Cruz joked, “Yo. We’re Turnstile. What’s up?”

At that, Toner played album opener “That’s Fine.” It’s a pop song in miniature, hurriedly cycling through glassy riffs spliced with spindly leads and a lush, half-tempo bridge. Cruz sounded dejected, melodically exhaling about staying in bed. Lethargy and emotional entropy color the whole record in blues. The lyrics to “West End,” far from the conflicted pride he expressed in conversation, describe the sort of dull tedium that he spent all day battering off. Take a look/Feel the cold world surrounding me/Painting pictures of suburban imagery … It’s time I leave.

On the Road with Victory and Associates, Part 5: Santa Fe,...