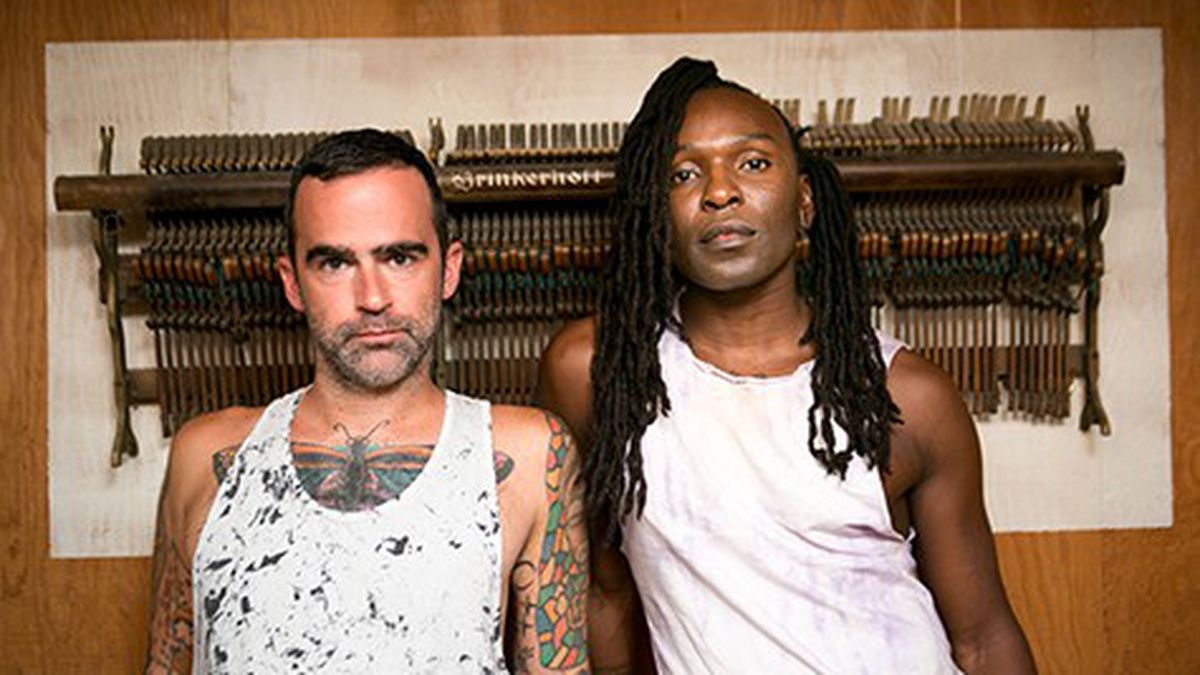 With the release of its debut album, All Eyes on Me, the beloved live act is bringing the Bay Area's queer party sensibility to broader a pop audience.

There was a heat wave on the night that dance pop duo Double Duchess performed earlier this month at Leo’s (5447 Telegraph Ave., Oakland), and the venue was not well equipped for the unusually warm weather. Since the dimly lit dive was unbearably steamy, most of the concertgoers lingered outside instead of watching the first opening act.

But when Double Duchess took the stage, attendees filtered back into the club and not only endured the heat — they embraced it. As davO (David Richardson) and Krylon Superstar coupled their rapping and singing with synchronized dance moves and bouts of vigorous twerking, a sweaty, enthusiastic dance party formed, almost matching the performers’ energy on stage.

The last track of Double Duchess’ set was a cover of Grace Jones’ “Bullshit.” DavO, the producer, reinterpreted the glam rock song with a bare-bones, thudding house beat that Krylon fleshed out with robust vocals. I ain’t got time for your bullshit welled up from his diaphragm and soared through the venue like it was the gospel. Then, sweat dripping and pigtails flying, the singer feverishly vogued to the beat for several minutes uninterrupted before grabbing the mic one last time to say, “Community is the most powerful magic on the planet.” At that, Krylon stepped off stage with a triumphant sigh.

As Krylon suggested, the Bay Area’s queer community is essential to Double Duchess’ success. The San Francisco-based band has been a mainstay of the local LGBTQ party circuit for the past four years, known for its well-attended, highly energetic live shows. This might come as a surprise to fans recently won over by Double Duchess’ debut album, All Eyes on Me, which came out earlier this summer. So far, the duo’s approach to promoting its music has had far more to do with face-to-face interactions with fans than its digital presence.

Though their online profile seems lower than turnout for their live show suggests, Krylon and davO are veteran performers. Krylon spent the Nineties immersed in New York City’s club kid subculture — which was known for its emphasis on outlandish, gender-bending fashion — and even worked at the legendary venue Limelight alongside Michael Alig (the murderous party promoter whose life inspired the film Party Monster). Meanwhile, davO got his start in the Annapolis, Maryland rock band Jepetto, which collaborated with Good Charlotte and played at festivals, such as Warped Tour. When Krylon and davO both ended up in the Bay Area in the late 2000s, they became friends through the nightlife scene and began making music together.

Given Double Duchess’ established notoriety, it might seem unexpected that All Eyes on Me is the group’s first album. However, despite how strong its live performances have been since the beginning, the dynamism of Double Duchess’ stage shows — with their vibrant dancing, colorful outfits, and enthusiastic audience participation — haven’t always translated well on their previous EPs.

All Eyes on Me, however, marks Double Duchess’ maturation as two studio artists. While the album is still a collection of club tracks, its challenging sonic palette and savvy blend of pop and hip-hop subgenres — like bounce, vogue, and new wave — makes it work outside of venues as well as inside them. You no longer have to be at the party to get what it’s all about.

One album highlight is “Good Girl Freak Out,” which the duo released as a single late last year. Celebratory flute samples, handclaps, and high-pitched whoops punctuate the bouncy bass line. I’m still your girl/I won’t freak the fuck out, sings Krylon with histrionic intensity. In the track’s surreal music video — which involves drag, jump rope, lots of hair, and a Kelly Osbourne cameo — the words and dizzying visuals convey a sense of mania.

Double Duchess followed up All Eyes on Me with another music video for its title track, which features a particularly strong verse from Baltimore spitter TT the Artist. The video takes place in a dark cabaret where androgynous dancers writhe orgiastically around davO and Krylon. While the song’s lyrics have more to do with seduction, the gender nonconforming sexiness on screen is an important reminder that in addition to making fun, booty-shaking anthems, Double Duchess is doing the vital work of drawing eyes to a diverse spectrum of queerness that’s too often invisible in pop.