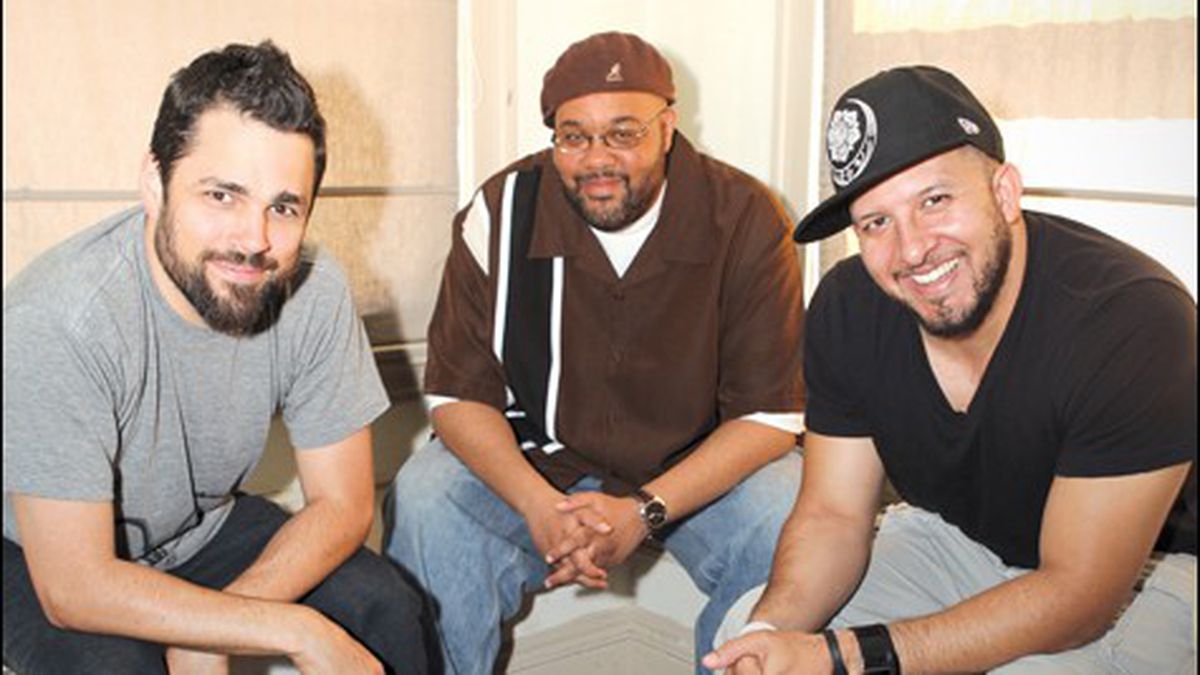 From Quannum Projects to Science Fiction

The Mighty Underdogs do most of their recording in a small North Oakland flat with art on the walls and instruments strewn about every corner. The inventory is enough to supply a large jam band or jazz combo: Four electric basses, one upright, a Lowry organ, lap tops, samplers, DJ equipment, a Crumar synthesizer, and a full trap set. There’s also a steel drum in the dining room, next to a bookshelf crammed with mostly high-minded literature: Nabokov, Kurt Vonnegut, David Foster Wallace, Eric Schlosser, Hunter S. Thompson, Witgenstein, Harry Potter, The Rolling Stone Jazz Record Guide. A poster hanging on one kitchen wall details the whole historical timeline of American jazz. A framed photo in the living room shows a guy in scuba gear.

His real-life counterpart sits on the couch, brooding. Ethan Parsonage — better known by his alter ego, Headnodic — is a stalwart in the local hip-hop scene. Long known as the bassist for Crown City Rockers, he also makes beats for Megaphone (with Boston rapper Moe Pope) and the relatively new Mighty Underdogs, which he formed with emcees Lateef the Truth Speaker (aka Lateef K. Daumont) of Latryx and Gift of Gab (a.k.a. Timothy Parker) of Blackalicious. The three artists conceived their group as hip-hop’s answer to a rock power trio. They decided to share the spotlight equally, and emphasize playfulness over persona.

That approach is seldom seen in a genre that normally has a concrete hierarchy. Most hip-hop groups import the leader-sideman mentality of jazz and rock: The emcees take center stage, while a producer or DJ hovers in the background. Such was the case for Run-D.M.C., Digital Underground, Salt-n-Pepa and, well, everyone else. It’s become a truism of hip-hop that what you see onstage doesn’t always reflect the actual division of labor.

But Mighty Underdogs are different, since Headnodic shapes and determines the group’s sound. His beats were the impetus for forming in the first place, said Lateef. “I came by to listen to some of Headnodic’s stuff for my solo record,” the emcee recalled. “Headnodic played me a bunch of beats, and I picked maybe eight of them? Nine of them?”

“You told me to stop after a while,” Headnodic interjected.

“Yeah,” Lateef said. “I already had ideas for a bunch of them immediately.”

Lateef developed concepts for his eight or nine tracks, rapped a single verse for each, and sent them over to his longtime collaborator, Gift of Gab. Within a few weeks, they had enough material for a six-song EP, which they dropped in October, 2007. The following year the Underdogs signed to Def Jux and released their debut album, Droppin’ Science Fiction. The title track features a sharp, metallic beat with space-age sound effects. Lateef name-checks characters from Star Trek. Gab rhymes in triplet rhythm patterns. A woman’s voice bellows from somewhere far away.

At a time when most hip-hop artists are returning to the lo-fi sounds of snare and high hat, “Science Fiction” seems like an anomaly. But it barely stands out on the Underdogs’ album, which is characterized, largely, by its florid beats and long-form, narrative rhymes.

“A lot of the songs on the album are based on fictional storytelling,” Gab said. “The actual song, ‘Science Fiction,’ is just kinda like a spin on Star Trek, Star Wars, Battlestar Galactica … We’re just like, traveling through space, using our rhymes as our weapons, and what not. You know?”

The idea was to have each song hew to a theme. Thus, “Want You Back” pines for a lost paramour, while “Gunfight,” describes the shoot-out scene of a spaghetti western. In “So Sad,” Lateef limns an intricate portrait of a skid-row neighborhood. “Victorious” is about overcoming setbacks.

More interesting than the lyrics is the overall musicianship. Headnodic started as a bassist, but dabbles in many instruments. As a producer, he starts most tracks with a sample, slices it up beyond recognition, and repurposes one tiny element — like the horn hits on album opener “Monster.” In most cases, he replays the samples on live instruments. He commandeered Adam Theis‘ Jazz Mafia horn section to appear on a couple songs. Even the computer-based tunes require fully-conceived synth orchestrations, and a lot of manipulation of gadgets.

Lateef and Gab are musicians in their own right. Gab moves through the world as though a 4/4 beat were always pulsating in his head. Lateef intones words with the same lilt he uses when singing or rapping. His cell phone ringtone is the opening riff to D’Angelo‘s “You’re My Lady;” when it rings, Lateef and Headnodic automatically hum out the rest of the bass line.

Hip-hop wasn’t always their primary medium. Gab, who was raised in the San Fernando Valley, grew up singing in church choirs and gravitated toward hip-hop for the usual reasons. Lateef was part of a doo-wop group at Morehouse College, where he attended a summer bridge program before entering his junior year of high school.

The two rappers met at UC Davis, where they both hosted shows on radio station KDVS. Lateef was on the way to get a BA in African-American studies (he eventually finished at UC Berkeley). Gab was rapping, and bumming around in Sacramento. Through the radio station they met and joined forces with DJ Shadow, Chief Xcel, and Lyrics Born, plus two student DJs — Jeff Chang and Joseph Patel (aka Jazzbo) — who would go on to become successful journalists. The rappers and DJs formed a loose coterie called Solesides, which would morph into the label Quannum Projects. Then they split off into pairs: Xcel and Gab became Blackalicious; Lateef and Lyrics Born were Latyrx; Lateef and Xcel became Lateef and the Chief, a.k.a. Maroons. Many launched solo careers.

While these guys acknowledge that they’re better known for past achievements, they still think the Underdogs are a maturation of sorts. And they’re right: Past albums in their collective dossier had slick beats and cool rhymes. Droppin’ Science Fiction has odd bar flows, rhythmic subdivisions, and concepts that are fully thought out. Not to mention sweat equity. The artists spent weeks holed up in Headnodic’s home studio, crafting their product. Then they went back and redid it.

“In signing with Def Jux we needed to replay all the samples,” Headnodic explained. “It was a good opportunity for me to break out all the instruments, hire a horn section, and do a whole classic recording.”

“Horn section? He hired a whole orchestra for an interlude,” Gab interjected. He paused a beat, grinning.

“Yeah,” Headnodic scoffed. “And then we cut it.”