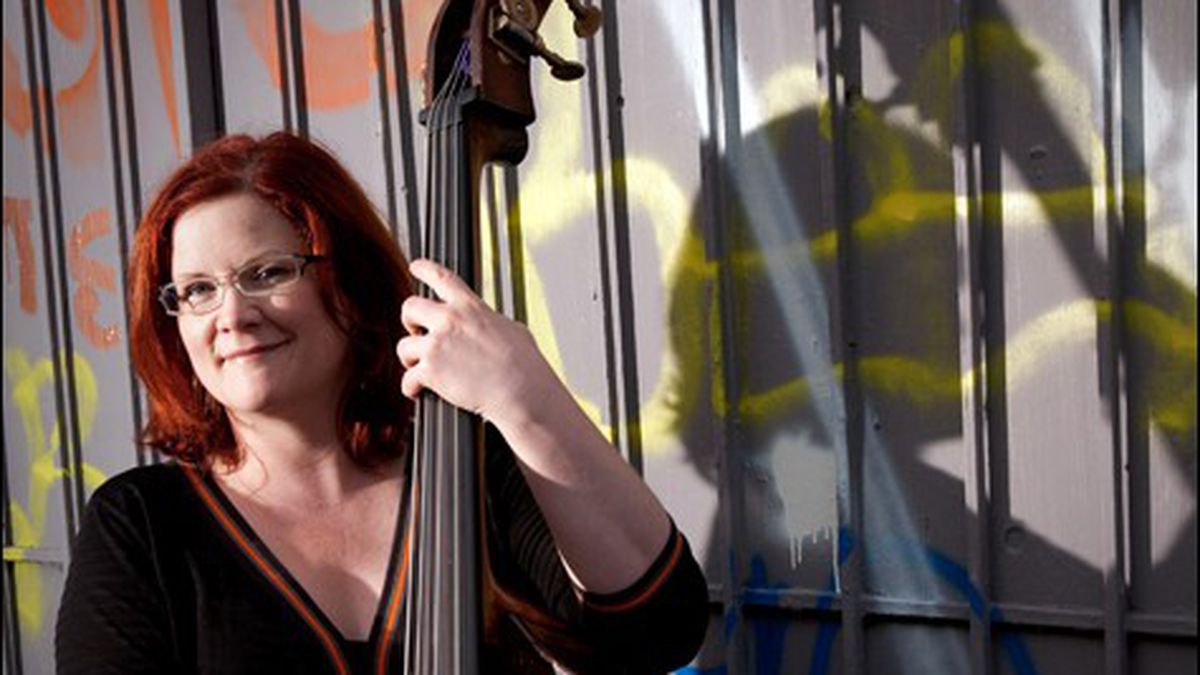 From Bass to Mezzacappa

Lisa Mezzacappa's music can be achingly beautiful or frustratingly complex. But it's always fascinating.

Lisa Mezzacappa is unflappable. An arts curator by day at Stanford University, she works nights in San Francisco’s experimental music scene, quarterbacking two bands of her own and serving as gun-for-hire. She’s someone you wouldn’t second-guess. Raised in the suburbs of Staten Island, she grew up playing in death-metal bands and discovered upright bass during college, while pursuing a BA in biology. She has East Coast grit, strawberry-red hair, and small, buttony features. Her music can sound achingly beautiful or frustratingly complex, depending on your perspective.

“Is this good?” asked a listener at Revolution Cafe in the Mission District, where Mezzacappa accompanied pianist Ted Brinkley last Tuesday. “Or is it just hard?”

It’s Mezzacappa’s job to erase such distinctions. She took a rather unwieldy route to become a professional musician: metal head, garage band geek, would-be biologist. Jazz wasn’t really in the cards. “I think I grew up playing music in a way that a lot of guys actually grow up playing music,” she said. It’s different from how a lot of my female friends grew up. Like, I was in garages with dudes, playing with our fingers ice-cold, eating cold pizza every single night of the week. Weekends were jamming with your band. That was what we did.”

As a result, she took the natural suburban-teen progression from metal to ska to funk to super-heavy-hardcore. She played clarinet and electric bass, dabbling in a variety of milieus. During her senior year of high school, Mezzacappa became infatuated with the music of Charles Mingus. She started trekking out to the Fez in downtown Manhattan every Thursday to catch the Mingus Big Band. The late set was only six bucks, Mezzacappa said. The bouncers never carded.

It wasn’t until Mezzacappa began studying at the University of Virginia that she discovered the upright bass. She started taking lessons, fell in love, and changed her whole career trajectory. “I got totally addicted,” she said. “I realized that if I got a music degree I could also get the scholarship for bass lessons, and that’s all I really cared about. I didn’t plan on being a musician.” In 2001 she moved to Oakland to pursue an MA in ethnomusicology at UC Berkeley. Mezzacappa didn’t intend to resettle; she thought she’d spend two years being a “displaced New Yorker,” then bounce. But somehow, the Bay Area got under her skin. Nine years passed and, in the meantime, Mezzacappa became a notable sidewoman. She began curating several music events around town (including a monthly series at the Make-Out Room and a new quarterly series at Red Poppy Art House). Over time, she became a veritable leader in the Bay Area creative music scene.

Saxophonist (and former East Bay Express employee) Kasey Knudsen once said that she and Mezzacappa take the exact opposite approach to band leading — which became apparent when they decided to co-helm the eight-piece Permanent Wave Ensemble. Knudsen is very exacting. She maps everything out to the minutest detail, and wants her musicians to play what’s written on the page. Mezzacappa will write a chart and ask her band to play around it. “We both worked the band really hard in rehearsal,” Mezzacappa said. “The day of the gig, I said to the guys, ‘You know, we’ve practiced, we’ve rehearsed, now just let go and play. All that matters is that you play. If you miss something, just mean it.” She smiled. “And Kasey was like, ‘Not for my music. I want you to nail it.'”

Mezzacappa didn’t always have such a free, breezy way of telling other people how to interpret her own work. She’d prefer to characterize herself as one of the most rehearsed improvisers around — meaning she seldom leaves her band without a net. Even with the emphasis on “openness,” she still errs on the side of writing everything down. Her charts can run up to five pages. Mezzacappa says it’s largely about leveraging authorial intent with the musicians’ personalities. “The biggest challenge is figuring out how much information they need to go somewhere new, but how much is too much, where you’re tying everyone’s hands. …You have to embrace the risk of it.”

And, granted, risk is something that Mezzacappa does quite well. In 2007 she and fellow improviser Jon Brumit got a grant from the City of Oakland to run their own short-term recording studio at the Laney College Flea Market. They assembled a large band of local musicians, acquired a vintage record cutter that looked like a giant piece of furniture, and sat among the flea market vendors for six weekends in a row. Anyone could jam with the band, get a commemorative record cut on the spot, and wind up on the resulting two-disc compilation that Mezzacappa and Brumit released after their run.

“It almost killed us,” said Mezzacappa. “It was so freakin’ hot. We had to wake up at five in the morning to get there. We had all this equipment. We had hours in the sun recording people. It was so crazy. Some extraordinary people showed up … sometimes people wanted to sing songs they wrote. They wanted to just make up stuff. They wanted to do a Beatles cover. They’d found some instrument at the flea market they wanted to play. Everyone made it to the record.” She said that some people thought the instruments were for sale. Old ladies would totter up to the musicians and try to haggle over the price of a saxophone or a guitar.

In comparison to the flea market experiment, Mezzacappa’s current projects seem relatively tame. Two years ago she formed a jazz quartet called Bait & Switch under the auspice of Intersection for the Arts. Featuring traditional instrumentation (drums, sax, bass, electric guitar), it’s a hard-driving rhythm band with a scruffy, garage sensibility. Mezzacappa describes the group’s first album, What Is Known — which drops this week on the Portuguese label Clean Feed Records — in terms she might have affixed to the death metal experiments of her youth: “Edgy.” “Open-ended.” “Propulsive.” “Grooves in an unexpected way.” What Is Known includes eight original tunes (one is based on a two-and-half-beat sample from an Ed Blackwell drum solo), plus contorted arrangements of “I’ll Be Here Waiting” by Air, and “Lick My Decals Off, Baby” by the Seventies psychedelic rock outfit, Captain Beefheart.

But that’s just one side of Mezzacappa’s personality. Her other group, Nightshade, is much more instinctual, with its odd pairing of vibraphone, clarinet, electric guitar, and laptop. Mezzacappa said she likes the warm, wooden sound of a reed instrument cradled in electronic fuzz. Permanent Wave — which she co-leads with Knudsen — is perhaps the most concept-oriented. It’s largely dedicated to reinterpreting the music of Carla Bley.

“I don’t need every group to scratch every itch,” Mezzacappa said, sitting at Revolution Cafe on the night of the Ted Brinkley show. Two guitarists were strumming music of the Andes outside, while a crowd of hippies stared raptly from the patio tables. One by one, Brinkley’s band members began filing in: alto sax, trombone, clarinet, drums. They set up stands with music charts, which indeed looked pretty complicated: odd rhythms, shifts in meter, fast flurries of notes. Brinkley placed a small keyboard beside the piano. He looked aggravated. Mezzacappa stood up and grabbed her bass, which lay patiently in the corner. Her face was a study in self-composure.