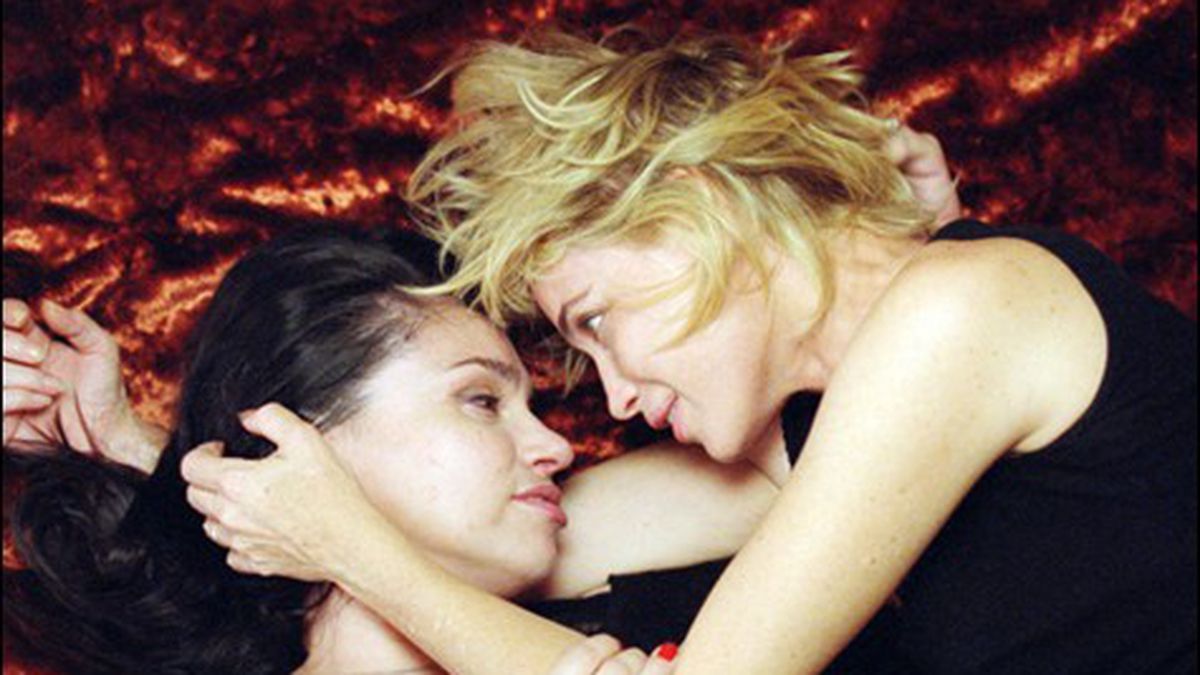 Frameline, aka the San Francisco International Lesbian Gay Bisexual Transgender Film Festival, has always been a feast of dichotomies — young and old, today and yesterday, heartbreaking and reassuring, exclusive and all-embracing, tragic and triumphant, raunchy and demure. A marvelous confusion of possibilities, just like life itself. Where else could you find a transgender zombie music video on the same program with the portrait of a gay hairdresser in Myanmar?

Vito, the festival’s opening night film (7 p.m. on Thursday at SF’s Castro Theatre), embodies Frameline’s commitment to remembering the LGBT past. Fittingly, it’s the story of a rebel. “I never, not for a second, believed that it was wrong to be gay,” declares activist Vito Russo in the midst of filmmaker Jeffrey Schwarz’ bracing documentary. Russo was brought up in the 1950s in a close-knit Italian-American family in New York City’s East Harlem, fell in love with movies at an early age (he was a Judy Garland acolyte, natch), then went on to write one of the most influential film books of his era, a study of gay and lesbian representation in the movies called The Celluloid Closet.

But that was just one facet of Russo’s life. Unlike many of his contemporaries, he had the full backing of his family as a gay man. Maybe that’s why he pushed back so hard against discrimination. An irrepressible voice and personality at the forefront of the gay rights movement, Russo made the political connection between partying and marching — he founded ACT UP, demonstrated against Big Pharma’s stranglehold on AIDS research, and later was instrumental in the first San Francisco LGBT Film Festival. He died of AIDS in 1990. The HBO documentary Vito leaves no doubt that he was, in the words of one witness, a gay hero.

New York City resident Jenn (played by actress Jenn Harris), the main character of Jonathan Lisecki’s comedy Gayby, has a refreshingly ordinary face. As it turns out, that face acts as a remedy to the almost unbearable cuteness and ready-for-network-TV homogeneity of this sitcom. Hetero yoga teacher and “hag since birth” Jenn wants a baby but can’t find the right guy despite an alarming number of trysts. Her gay best friend Matt (Matthew Wilkas), owner of a comic book shop, can never get laid — something always ruins the setup — but is willing to supply the sperm. Bam! Let’s have a baby together. A gayby. Ordinarily, a plot outline like this would trigger the gagging reflex, but writer-director Lisecki, who nearly steals the movie as Jenn’s outrageously femme “bear” pal Nelson, is overflowing with zingy, stinging dialogue, and his characters really run with it. Comics store laffs. Yoga studio laffs. The interior designer. The herbal tea lady. Guilty-pleasure champ of the festival. Gayby plays the Castro, Saturday at 7 p.m.

Ever heard of Jobriath? How about Jobriath Boone, Bruce Campbell, Bryce Campbell, or Jobriath Salisbury? They’re all the same person, and if Kieran Turner’s documentary Jobriath A.D. is any indication, that openly gay man was one of the great unknown superstars of pop music in the age of Lou Reed and David Bowie. Philadelphia native and “true fairy” Jobriath, a classically trained pianist with a distinctively high-pitched voice, parlayed a role in the original cast of Hair into a recording contract and a massively hyped launch circa 1972, but despite catchy songs and elaborate production his concert and record career flopped on impact. His music transcended his gayness but people weren’t ready for someone so unapologetically “out.”

Turner’s doc interviews NYC promoter Jerry Brandt, the failed architect of Jobriath’s career, and gets plenty of period footage of the talented but misunderstood performer, from his Hair days all the way to his death from AIDS in the “pyramid apartment” of the Chelsea Hotel in 1983. Alongside Vito, it tells us everything we ought to know about New York in the Seventies. Jobriath A.D. screens at SF’s Victoria Theatre on Tuesday, June 19, 9:30 p.m.

By now, seasoned foreign-film fans might have thought they’d seen everything there is to see on screen about the difficulties of living in Islamist-ruled Iran, but female filmmaker Negar Azarbayjani’s Facing Mirrors presents a uniquely new situation. It tells the story of Adineh, or “Eddie,” a young Tehran woman (played by Shayesteh Irani) in the final phases of deciding to get the hell out of the country. Reason: She’s a butch lesbian who steadfastly refuses to either knuckle under to that society’s abhorrence of homosexuality, or to adopt the obedient, submissive role of most Iranian women by submitting to an arranged marriage. Eddie, in fact, wears jeans, work shirts, and a baseball cap, and takes command of any given situation, just like a man. Oh, the shame.

Trouble multiplies when Eddie crosses paths with a more conventional woman, Rana (Ghazal Shakeri), who’s a bit of a rebel herself. In order to make ends meet while her husband is in prison, Rana turns the family sedan into an unlicensed hack with herself as the cabbie. Another rule broken. One day as Eddie is being menaced by roadside louts, she flags down Rana’s cab and the two take an odd but illuminating road trip. At first Rana is horrified by Eddie’s defiant deviance, but the two get to know each other. Actress Irani goes all out in the role of Eddie, and we learn a few things. For instance, that gender reassignment surgery is completely legal in Iran. Also, that apparently any woman brave enough to assert herself has a chance to bluff her way out of the everyday humiliations of being female in Iran — but that anyone who bows down will be expected to do so forever. Facing Mirrors shows Tuesday, June 19 (9:30 p.m.), at the Elmwood in Berkeley. One of the best films in this year’s Frameline.

Only eight of the festival’s 89 feature films play at the Elmwood. Frameline is definitely West-Bay-centric. But you won’t have to cross the bridge to see Virginie Despentes’ feisty Bye Bye Blondie, a middle-aged lesbian tale of amour fou starring Emmanuelle Béart (8 Women) and Béatrice Dalle (Time of the Wolf) as a pair of over-emotional former lovers reuniting on the far side of collagen surgery. Ex-skinhead Béart is now a TV talk-show host as well as the bourgeois wife of a rich Parisian man who has a boyfriend on the side. Punk rocker-turned-artist Dalle, however, is boho all the way — she moves into Béart’s townhouse and trashes it in the throes of making one of her installations. Pretty silly but fun to watch with a tub of popcorn. Wednesday, June 20, at the Elmwood.

Another of the Elmwood films, Stephen Cone’s narrative The Wise Kids, forms a pair of Deep South bookends with Harriet Hirshorn and Katherine Linton’s documentary Mississippi I Am. In the former, three fundamentalist Christian best friends graduate from high school and face major lifestyle choices. Tim (Tyler Ross) already knows he’s gay, and is heading for film school at NYU; minister’s daughter Brea (pretty Molly Kunz) has her own doubts about religious strictures; but the most interesting character is Laura (Allison Torem), seemingly the most devout of the trio. She’s sweet and open-hearted, but doesn’t know how to process the left-out emotions she’s experiencing. Filmmaker Cone’s deft touch with his young actors is matched by his thoughtful screenplay, which refuses to take sides. See The Wise Kids June 21.

The other Mississippi movie, Mississippi I Am, takes us into the world of a similar group of kids, including a bullied lesbian teenager as well as pop singer Lance Bass from ‘N Sync, who’s out and defiant. If anything, the real-life youths are even more articulate about their struggles with their church-dominated, homophobic corner of the world. Observes one subject: “There is no aspect of life in Mississippi that is untouched by religion.” It plays on a twin bill with another doc, Meredith Heil’s musical journey Whistlin’ Dixie: Queer Sounds, New South, Saturday, June 16 at SF’s Roxie Theater.

Also worth seeing: director Mikael Buch’s pan-Euro, gay-themed farce Let My People Go!, in which a congenially sissified postman named Ruben (Nicolas Maury) returns to his French-Jewish family in Paris (headed by mom Carmen Maura) after a falling-out with his boyfriend in Finland, and crazy things happen. Actor Maury is a show in himself. It’s at the Castro, June 23. Michael House’s richly detailed literary documentary Revealing Mr. Maugham opens up the career of English novelist W. Somerset Maugham (Of Human Bondage, Rain) and his life at the top of continental gay artistic society in the mid-20th century, with admiring comments by such experts as Pico Iyer, Armistead Maupin, and Alexander McCall-Smith. Castro, June 21. The transatlantic romance of crack-addicted Danish attorney Eric (Thure Lindhardt) and documentary maker Paul (Zachary Booth) in 1990s New York makes for a turbulent, soapy ride in Keep the Lights On. Director Ira Sachs keeps the drama at a low, nervous boil — the dialogue almost seems overheard. June 20 at the Castro.