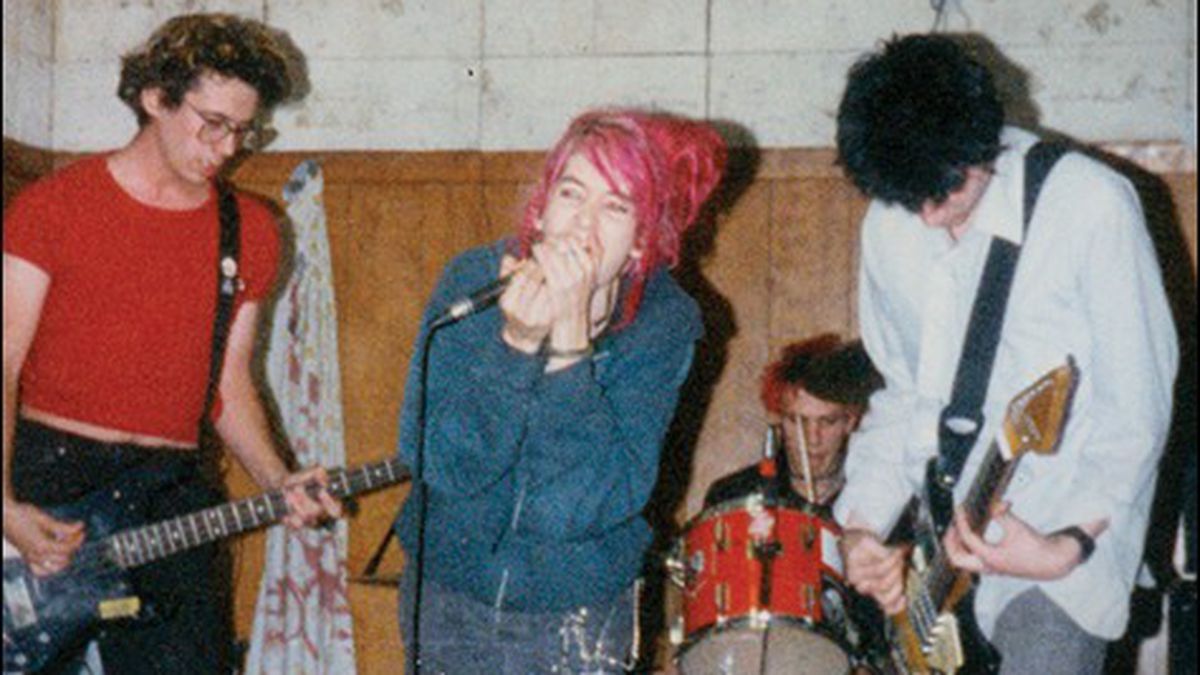 In 1994, the East Bay pop-punk phenomenon Green Day achieved commercial success. Two singles from Dookie, its third album and major label debut, rose to #1 on the modern rock charts, and the album eventually went platinum, with over ten million sales. A harbinger for pop-punk’s mainstream arrival, Dookie inspired droves of career-minded musicians to seek fame in once-underground East Bay venues like 924 Gilman Street. 1994 also marked the release of This Is Berkeley Not West Bay — a seven-inch compilation EP featuring tracks by Black Fork, Dead and Gone, AFI, and Screw 32 — which highlighted a different contingent of local punk. For Black Fork’s first vinyl appearance, the group contributed “People’s Parking Lot,” a savage critique of Berkeley’s countercultural symbol, People’s Park. That same year, Black Fork vocalist Robin Tussin, guitarist Josh Von Indar, and bassist Cyrus Nails recruited East Coast transplant Jim Nastic to drum in their new band. His membership solidified the group’s lineup for the next four years, and before disbanding initially in 1998, Black Fork spat much more satirical venom, even directed toward the punk scene itself, through unhinged hardcore and painstaking provocations. Twenty years after they originally came together, the quartet has reunited.

“They were fast, buzz saw, and careening out of control,” remembered Jesse Luscious, who originally released This Is Berkeley Not West Bay on his Zafio imprint. It was reissued by Alternative Tentacles in 2011 under Luscious’ label management. Zafio also released Black Fork’s follow-up EP in 1995. The tempo and brevity of Black Fork songs set them in the style of hardcore, and, though the group eschewed the era’s taste for melodic hooks, its jarring pauses and crescendos were arresting, memorable listening.

Chris Appelgren, longtime operator of the flagship East Bay pop-punk label Lookout!, remembered meeting Indar in the early 1990s, when Indar worked at a copy shop in Berkeley. Appelgren pegged Indar for someone who’d make copies for free, and sought his acquaintance. In 1997, Appelgren released Black Fork’s sole album on Lookout!. It was an oddity among the label’s catalog, which boasted commercially hopeful acts like The Donnas, The Mr. T. Experience, and The Riverdales. But the band’s anomalous character appealed to Appelgren. “They were totally irreverent and didn’t even take the conventions of punk seriously,” he said.

Since its inception, punk has defined itself in opposition to a revolving door of perceived sociopolitical ills, creating a protest culture that Black Fork sought to satirize in myriad ways. The band name itself reflects the group’s longest-running and most notorious gag: hating spoons.

“There were so many movements and so many causes,” Tussin said. “So we came up with a standard household object to blame for everything, from stupidity to obesity.” Indar even established the Bay Area Spoonless Society. The point, he said, was to mock dogmatic beliefs, which were more prevalent in the punk scene than anyone admitted. “I wanted to use propaganda in a really absurd way,” he said.

A Bay Area Spoonless Society newsletter appeared, along with a separate publication attacking the group. Luscious invited Indar onto his KALX radio show. For the interview, Indar adopted the persona of “Dr. Elbar Bar Bar Barre,” a B.A.S.S. spokesperson.

“There were whole squads going around taking people’s spoons,” remembered Nails, with a twinge of nostalgia. “Most people just stopped using them,” Nastic added. “When people find out I was in Black Fork, they still bring up all of the missing spoons.”

Black Fork’s methods weren’t always so oblique, especially when the group was antagonizing its peers. The group took its copies of This Is Berkeley Not West Bay and spray-painted over the side with AFI and Screw 32’s names. Black Fork also coined the compilation’s nickname, “There’s a Moustache in the Pit,” as a jab at AFI frontman Davey Havok, who’s moshing in the cover photo. Nastic recalled Indar’s habit of walking up to aspiring pop-punk stars to say, “Congratulations, you sound just like Green Day.” At Gilman Street, the nexus of the East Bay punk scene, Indar attended a collective meeting and proposed changing the name to “Crackers, a Sports Bar,” to point out its racial homogeneity. Impressively, the motion actually passed, leading the venue to consult its bylaws for a reason to invalidate his proposal.

Initially, Black Fork resisted Lookout! Records’ interest, because the label symbolized a commercial impulse to which the group didn’t relate — and even resented. Eventually, with a tour van in need of repairs and gear in need of an update, Black Fork relented, taking a small advance to record its debut album — ironically titled Rock for Loot — in 1997. Despite the label’s high profile and far reach, Black Fork’s relatively abrasive sound and obstinate ethos unsurprisingly hindered its commercial appeal.

“They chose to be different from what was in vogue at the national level,” recalled Appelgren, but he signed the group anyway, out of personal enthusiasm and friendship. When Black Fork insisted on committing exclusive tracks to the album’s cassette version, despite the format’s waning popularity, Appelgren capitulated. From the perspective of a seasoned label operator, Luscious stopped short of calling the move commercial suicide. “If I was the label, I’d be like, ‘Hey that’s really fucking funny. No,'” he said. The album’s blistering hardcore alienated Lookout!’s pop-punk loyalists on its own, but indulging a pet fondness for tapes at the expense of consumer presence was typical of the outfit. Rock for Loot was Lookout!’s final cassette release.

Shortly after the release of Rock for Loot, rigorous touring and financial burden exhausted Black Fork. Meanwhile, the East Bay punk scene split further along stylistic lines, and maintaining a contrarian, divisive band became a burden. Indar said he suffered from panic attacks. In 1998, Black Fork played its final show at Gilman Street, as part of a weekend festival celebrating Lookout!’s ten-year anniversary. The members of Black Fork started new bands, and spoon usage was cautiously reinstated. Black Fork reunited for Gilman Street’s twentieth anniversary in 2006, played again in 2009, and reunites this month for its own twentieth anniversary.

Dookie precipitated the mainstream embrace of punk, but Green Day frontman Billie Joe Armstrong continued to support miscreants like Black Fork. In 1995, Armstrong recorded Black Fork’s “Tour of the Curse” EP for $100 in his scrappy home studio, Cat Box. He sent the band home with more than $100 worth of liquor accumulated on Green Day tours. Armstrong recorded Rock for Loot in 1996 for a low rate as well. By that time, Cat Box was a multi-room complex in the basement of Armstrong’s custom-built home. Bonds formed early on at Gilman Street were strong, even with the scene’s most incisive characters.

“Black Fork wasn’t competing for main-stream success,” said Appelgren. “They were too interesting — and too smart — for that.”