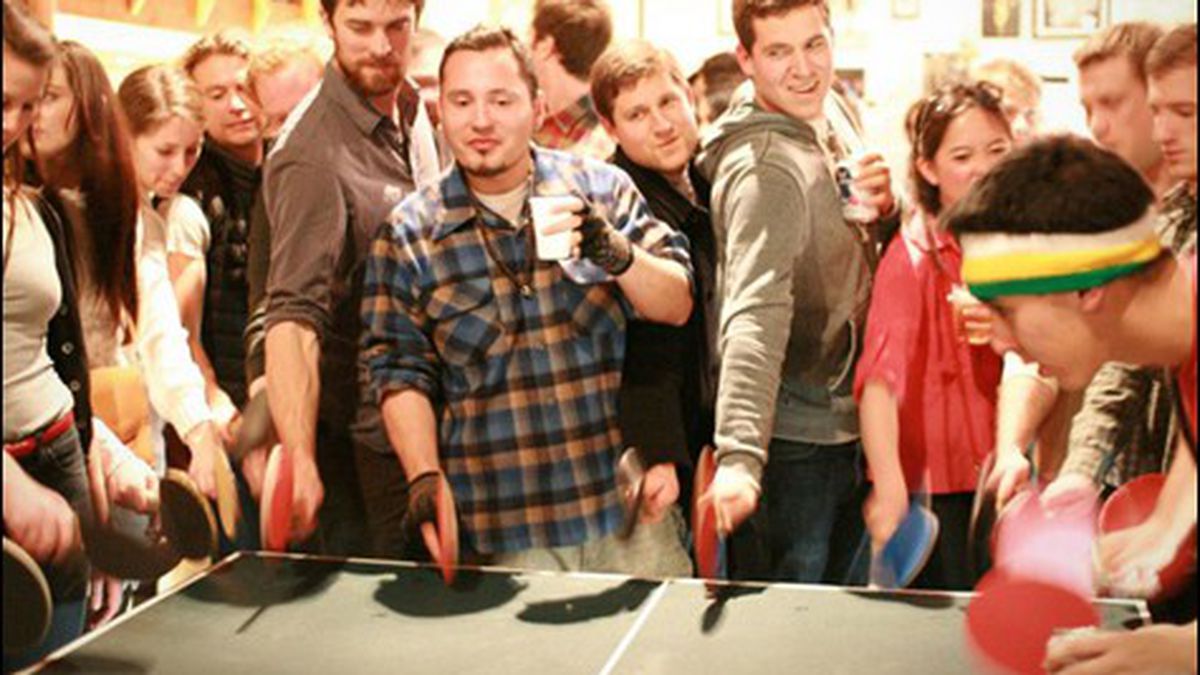 For the Love of Ping Pong

Despite what at least one of his self-penned online bios claims, Allan Hough is not an “American actor, screenwriter, and philanthropist whose career was launched following the success of the film Good Will Hunting, from a screenplay he co-wrote with friend Ben Affleck.” His arrant lack of Hollywood stardom notwithstanding, the 31-year-old San Franciscan is at least marginally known for his hyper-local, uber-hip blog about San Francisco’s Mission District, Mission Mission, on which he has published 4,685 posts to date on pressing topics like “his and her crotch rips” and Dolores Park acrobat troupes.

As of late, Hough has attracted attention for the raucous ping-pong games he has thrown with devout frequency at San Francisco bars since last summer. Dubbed “American Tripps,” the twice- to thrice-monthly gatherings have drawn scads of barflies through a frenetic, booze-fueled version of the game that entails dozens of paddle-wielding players surrounding a table and swiping at a ball while balancing a libation in their free hand. Players drop like flies with each missed hit until a single victor remains and another round begins.

Hough said the games shake things up a bit in a sometimes stagnant bar scene, where the same people chat with the same people night after night. He can even count at least five romances that have been sparked by his shindigs, including one that led to a mid-game marriage proposal. “One of my favorite things about the game is that you’re lined up with a bunch of strangers,” he said. “Right off the bat you’ll pick somebody out who charms you — whether it’s because they’re cute or they’ve just got an interesting way of holding the paddle. You get engaged with people in a different way.”

Already a lifelong ping-pong enthusiast, Hough grew keen on the Berlin-style spin-off in 2008, and has since made two trips there to play in dark Deutschland dives. He says the sport originated in a German village, and claims to be the first to bring it to the US. And while it’s true that beer pong — the drinking game celebrated by thirsty college students — has become an American tradition, it should be made clear that the German iteration is in fact a sport, wherein drinking is but an option. As Hough explained, “The difference between Berlin-style ping-pong and beer pong is that beer pong has basically nothing to do with ping-pong — it’s just throwing balls at cups.”

Now there’s good news for East Bay residents who consider a trek to San Francisco so arduous that the city may as well be in Western Europe: Starting on Saturday, June 16, and continuing on June 23 and 30, Hough is bringing American Tripps to Paisan (2514 San Pablo Ave., Berkeley), where people can play Berlin-style ping-pong on the patio and partake in $1 slices and beers in addition to more gourmet fare and fancy cocktails. It’s the first time the event has been held in a restaurant setting — and if it proves as popular as its San Francisco counterpart, it won’t be the last. 8-11 p.m., $3. AmericanTripps.com