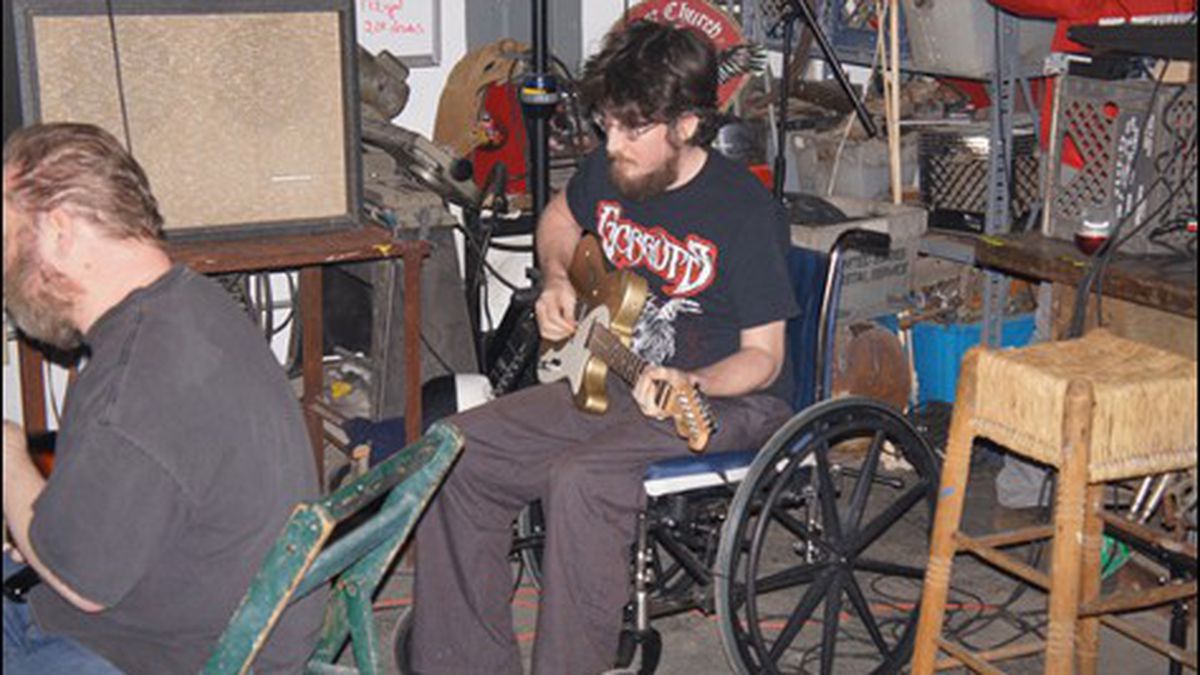 For the Benefit of Jay Korber

Last December, everything seemed to be coming together for musician Jay Korber: He was playing drums with experimental metal outfit Burmese (a band Korber had long admired), as well as in two side projects, Ettrick and Nuclear Death Wish; he lived in a rent-controlled studio in SOMA; and he biked between his practices, performances, and shows nearly every day.

Then, late in the evening on December 12, 2012, Korber’s longtime girlfriend, Angela Edwards, got a call from San Francisco General Hospital. Earlier that night, while biking home from his weekly Wednesday-night street hockey game, Korber was caught in a grisly accident with a street sweeper that dragged him for 41 feet. He lay in critical condition with a compound fracture of his pelvis, a shattered tailbone, several broken ribs, a torn colon, and a ruptured bladder. As Edwards was told, pelvic trauma incurs extreme blood loss, so the mortality rate for his injuries was perilously high. As she hurried to the hospital, Edwards didn’t know whether Korber would live or die.

After a month in the ICU, it seemed Korber would pull through. But his recovery depended on more than surgeons and physical therapists. That’s because, like roughly 20 percent of adults in the United States, Korber, who had up until the accident worked full-time as a video editor for a small production company, didn’t have health insurance.

Word about Korber’s accident quickly spread through the local music community, and Korber and Edwards, who plays synth in the experimental electronic bands Tainted Pussy and Jeweled Snakes, were astounded by the outcome: Through music benefit shows, street hockey benefits, and online fundraising, friends and strangers have donated more than $14,000 to Korber. Though the money raised has only made a small dent in Korber’s $800,000 medical bills, it’s made a huge impact on his daily life.

Korber, who is still confined to a wheelchair, took his first steps with a physical therapist a few weeks ago. Soft-spoken, with a feathery beard and round spectacles, Korber primarily had Edwards speak on his behalf during an interview, but did talk about how the support of friends and strangers has truly overwhelmed him. “The people have come to my aid,” Korber said. “It humbles you.”

An online campaign raised $8,200 for Korber in its first two months, with 75 percent of donations coming from music connections. One of the higher donors was a musician Korber had never met — Dax Pierson, a former Amoeba Records employee who was in a car accident in 2005 while on tour with Oakland-based alternative hip-hop group Subtle. Pierson, now a quadriplegic, depended on support from the local community as well until he was awarded $18 million in a lawsuit with Ford Motor Company in 2009. The first benefit for Korber, in Berkeley on January 10, raised $1,600. The second benefit, on January 19 at Artists’ Television Access, a living room-sized space in San Francisco, raised $4,000.

“The bands playing the ATA benefit weren’t even well-known,” said Edwards, who added that a typical arts organization benefit show pulls in a few hundred dollars. “It was so drastic. It was so unexpected,” she said of Korber’s accident. “It makes people feel fragile.”

Both emotionally and financially, Korber’s life has been completely altered by the accident. While he was in the ICU, Korber had to move out of the rent-controlled studio he had lived in for eight years because the lease didn’t allow sublets and the building was not wheelchair accessible. Because he lives in San Francisco, Korber gets about half of his monthly medical bills covered by Healthy San Francisco, and he gets $1,200 a month from disability insurance for his living expenses. There is a pending legal case regarding his accident, but until it’s settled, Korber is using the money raised from benefits to help pay his rent, prescription costs, and other new expenses, such as rental cars to take him to doctor appointments four times a week, Edwards explained. “Everyone knows he’s going to need money for a while,” she said.

That’s certainly been true for Steve “Stiles” Chinn, who had played in Oakland metal and punk bands since the Eighties until he suffered a debilitating stroke in 2005, which erased much of his memory and impaired his ability to speak and walk. At the time of his stroke, Chinn was self-employed, printing T-shirts in the basement of his El Cerrito house for local bands; like Korber, he also had no medical insurance. Also like Korber, the music community came to his aid after his stroke and still does to this day. Every year since Chinn’s stroke, his friend Siobhan King has hosted an auction at the punk festival B.O.B. Fest to raise money for Chinn’s medical expenses. Last December, funds for his physical therapy and massage treatments were running low, so King and another friend, Amy Oleksijew, organized a Sunday night show with SF thrash band Attitude Adjustment as the headliner, which raised $1,600.

“It’s a tight community,” Oleksijew said. “A lot of people don’t make a lot of money so they sympathize when something comes up, something major.”

“We’re all the same family,” Edwards said of her experimental/noise music community. “People who play music that will never be popular. People who play music because they love music and nothing else.” Edward is now focused on organizing a blood drive to “put back all that blood that saved Jay.”

John Benson, a friend of Korber’s who has been putting on shows in the East Bay for the past 25 years, said it’s the shared DIY ethic and drive to sustain a thriving underground arts scene that rallies people to each other’s causes.

“A lot of times the music is total shit, but you pay door money to support people and hang out,” said Benson at a recent West Oakland warehouse show celebrating the 20th anniversary of performance art/noise group Cock ESP. That night was also Korber’s first performance since the accident. Still in a wheelchair and without the use of his feet to play drums, he joined Nuclear Death Wish on guitar.

Before his set, Korber sat a safe distance from the crowd, and seemed giddy as he shifted his slim body in his wheelchair. When Nuclear Death Wish took the stage, Korber positioned himself several yards from his bandmates, but faced inwards, as they all did. When the music began — all at once and lightning fast — tremendous energy filled the heavily decorated warehouse space. As the frenzied, atonal noise hastened to a climax, duct-taped guitars smashed into the cement floor and cymbal stands were kicked over. From the periphery, Korber concertedly strummed and twisted tuning pegs.

If the performance was any indication, it won’t be his last.

Early Adopters: An Analysis of the 2013 Oakland Mayoral Money Hustle