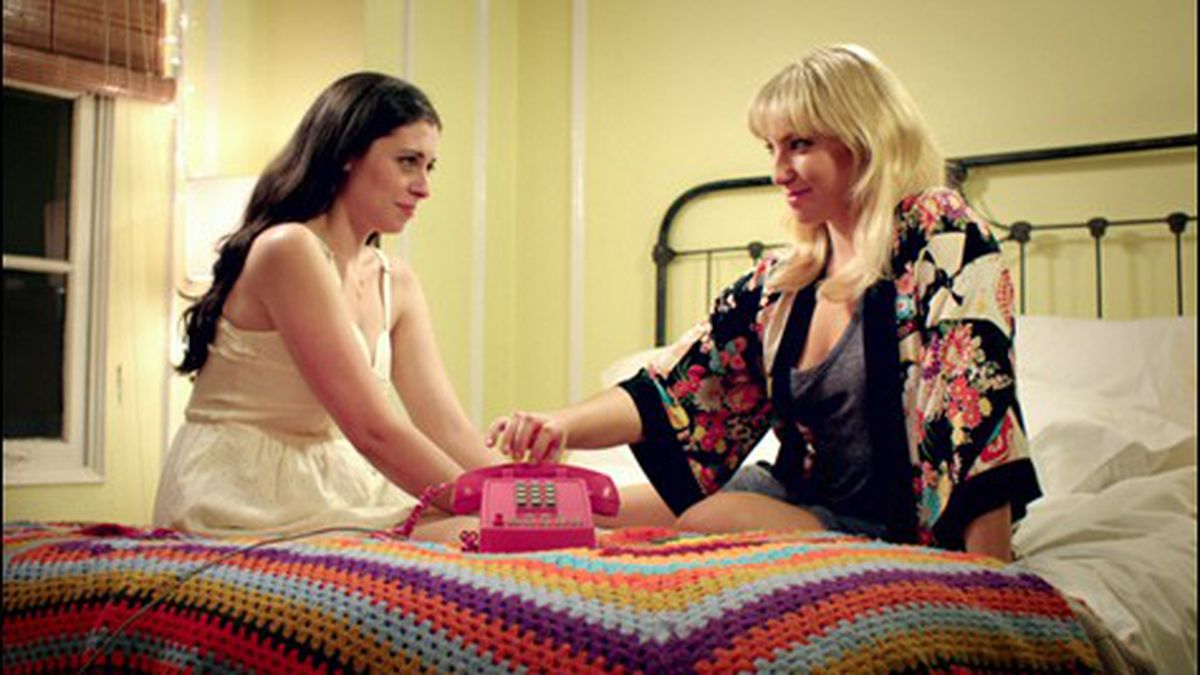 For a Good Time, Call … is a movie that probably should have been made around 1980, when phone sex was still somewhat of a novelty. But there are two good reasons why Lauren Miller and Katie Anne Naylon’s screenplay needed to cool its heels until now: 1) It was waiting for American popular culture to catch up with female, middle-class sitcom characters who could natter casually about blow jobs and woman-on-woman sexual attraction, and 2) Ari Graynor.

Ms. Graynor, the stick of personality dynamite in such films as Nick and Norah’s Infinite Playlist, Conviction, The Sitter, and Celeste & Jesse Forever, continues to carve out a notable career portraying various chatty tramps, backseat Bettys, and drunken Jersey girls. As a loud-mouth Jewish-American Ugly-Duckling Princess with a talent for the putdown, she’s the latest in a long line, from Shelley Winters to Sylvia Miles to Bette Midler to Julia Louis-Dreyfus. A slut supreme with an ingratiating tendency toward self-deprecation. When Graynor cuts somebody up, they stay cut and can actually laugh about it. That’s why she’s so much in demand in the quicksilver demimonde of comic chick flicks.

It’s the old mismatched-roomies routine when Manhattan editorial type Lauren (well played by writer-actor Miller) suddenly gets laid off and dumped by her superficial boyfriend in the same week, and is forced to move in with loosey-goosey Katie (Graynor), a loathsome acquaintance from her college days. The rent-controlled apartment of Katie’s deceased Bubby resembles the lobby of the Fontainebleau Hotel in Miami Beach in 1963, but at least Lauren gets her own room. Katie makes ends meet with a string of part-time jobs at nail shops and such. Lauren is getting nowhere applying for nonexistent publishing internships. They’re both open to suggestions.

That’s why the idea of starting their own phone-sex operation makes eminent sense. Using Lauren’s entrepreneurial acumen, Katie’s party-girl attitude, and their combined showbiz flair, the two young women install a dial-up (1-877-MMM-HMMM), launch an ad campaign, and immediately start making semi-serious coin by talking dirty to a variety of big-city guy customers. Too bad they rule out a gay phone role for Katie’s buddy Jesse (versatile Justin Long), but there are more than enough plot wrinkles to go around.

We find ourselves in the middle of a likable, lightweight comedy that flies on Graynor’s machine-gun delivery and the slightly more demure presence of co-writer Miller, both of them directed with a soft touch by Toronto-to-Hollywood filmmaker Jamie Travis. Naughty but nice, just like Katie and Lauren. If you’re not familiar with terms like “has-bian” or “frenemy,” all the more reason to catch this ditzy, cream-filled pastry.

Success breeds further quirkiness. A slightly dubious-looking sex kitten named Krissy (the wonderfully named Sugar Lyn Beard) joins the growing operation. Seth Rogen and Kevin Smith make cameo appearances, cementing the idea that this is the obvious flipside of a young-male laffer. Against her better judgment, Katie dates a regular customer she’s curious about, Sean (Mark Webber). Everybody smokes weed daily. Lauren’s suburban parents (Mimi Rogers, Don McManus) have a knack for dropping in unannounced and catching the girls with their pants down.

Speaking of which, in the days of When Harry Met Sally and Clueless, characters like these didn’t deal much with bi-curious tendencies beyond using them as the basis for malicious personal gibes or non-sequiturs. Last year’s big hit Bridesmaids opened the door. In For a Good Time, Call …, Lauren and Katie invert the bromance cliché of two guys looking in each other’s eyes and murmuring “I love you, dude” and take it to plateaus seldom seen outside the Frameline film festival. On them it looks good.