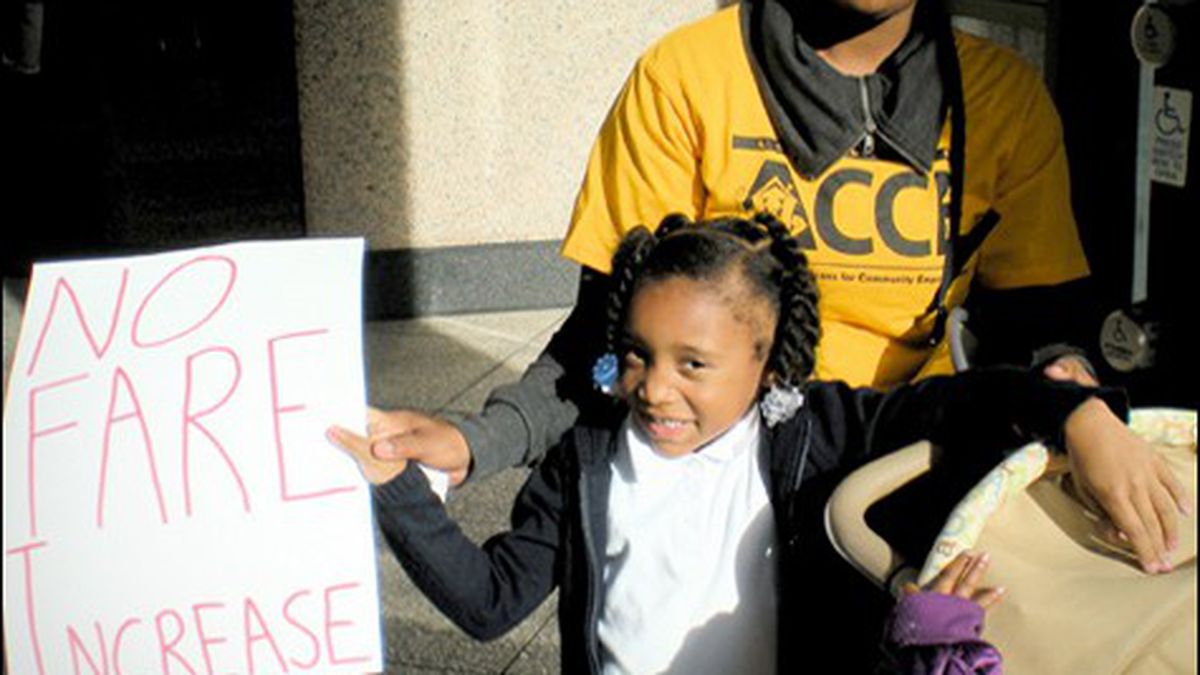 Fighting for Better Transit and Housing

A group of low-income AC Transit riders are battling for more bus service and affordable housing.

With three young kids and no car, unemployed Oakland mother Alia Phelps was hit hard by recent AC Transit route cuts and fare increases. Getting where she needed to go suddenly took a lot more time and money. So when she learned about Riders for Transit Justice she became an active member, speaking up at AC Transit board meetings for more service with no fare increases.

Soon, though, the bus riders realized that AC Transit was broke, said Phelps, “and we realized that they didn’t have the ability to get more money” because a large portion of their operating funds come from the Metropolitan Transportation Commission. “Then, we found out MTC was working on a Regional Transportation Plan, deciding how to distribute money for the next 25 years.”

That’s how Phelps and her fellow bus riders entered the esoteric world of regional planning, attending public hearings and sitting down with planning staff. The bus riders learned that MTC and another regional body, the Association of Bay Area Governments, are developing a plan that will shape both transportation and housing in the Bay Area for 25 years to come: where we can afford to live, what our communities will look like, how we will get to work, how long the commute will be, and more.

This mega-planning stems from a landmark state law requiring each region to coordinate transportation and housing plans to cut greenhouse gas emissions from cars. The idea is to reduce driving through “compact development within the existing urban footprint.”

Riders for Transit Justice, a project of the Alliance of Californians for Community Empowerment, is one of several local groups that are organizing transit riders. They want the regional plan to shift more transportation funding to actually operating transit. Too much money, they say, has poured into expanding BART and widening highways while lower-income people who depend on public transportation face longer waits and higher fares.

Meanwhile, members of the housing-rights organization Causa Justa/Just Cause worry that steering more development to urban areas has the potential to heighten economic pressures that force low-income residents out of their communities. As a result, the regional plan should emphasize construction of affordable housing “where the need is the greatest,” said Dawn Phillips, Causa Justa program director. Activists also say that urban areas need strong tenant protections so that when gentrification occurs around new housing developments, low-income residents are not forced out of their homes.

From the beginning, official goals for the regional planning process included equity, affordable housing, and “anti-displacement measures.” Still, according to ABAG Principal Planner Miriam Chion, the equity coalition has “provided a very forceful voice that we hadn’t seen before at the regional level” and “enhanced the equity components of the plan.”

But because “the plans are still evolving, it’s hard to say” whether they will ultimately include measures equity advocates seek, said MTC Commissioner and Berkeley Mayor Tom Bates.

The housing planners at ABAG generally agree with the equity coalition’s goals of more affordable housing and safeguards against displacement. On the transportation side, there’s more controversy. Sparks fly over the bus riders’ demand that MTC restore recent cuts in service by shifting funds from costly construction projects.

That’s a demand that’s been pushed for years by Public Advocates, a nonprofit law firm and advocacy organization that has filed complaints with the Federal Transportation Administration as well as an unsuccessful lawsuit. Public Advocates argues that MTC is violating federal civil rights law by neglecting the bus service that low-income people of color depend on in favor of suburban BART and highway expansion projects that benefit a wealthier, whiter population.

“The same set of critics took this complaint to the FTA when Clinton was president,” responded an exasperated Randy Rentschler, MTC director of legislation and public affairs. “Their issues have been reviewed and reviewed by the courts and administration people, and they just don’t exist.”

Specifically, MTC insists that its funding comes with restrictions that prohibit shifting more money to transit operations. “My agency has done everything we legally can to do the things they’re asking us to do,” Rentschler added.

Richard Marcantonio, Public Advocates managing attorney, disputed MTC claims. Although a panel of federal judges recently threw out the Public Advocates lawsuit against MTC, Marcantonio noted that it did not rule on the evidence of discrimination. In response to another Public Advocates civil rights complaint, the FTA pulled $70 million from the controversial Oakland Airport Connector project last year; currently the FTA is investigating another administrative complaint.

Like Rentschler, Bates asserted that MTC is doing as well as it can to fund transit operations, but he agrees more is needed. As a mayor, he also feels the lack of money to repair city streets. “Everything is falling apart,” Bates said. “We obviously need more money. The question is, where does that come from? Clearly we need to raise the gas tax substantially” to provide funds for transportation. The MTC is considering placing a gas-tax measure on the ballot, but getting it passed would be an “uphill battle,” commented another MTC commissioner, Union City Mayor Mark Green.

ABAG Executive Director Ezra Rapport said current state and federal budget restrictions threaten not only transportation and housing improvements, but all efforts to build sustainable communities. He cited “the super-majority requirement for taxation [in California], the rigidity of the tax system, the shredding of the safety net.” The current state budget, for example, raids redevelopment money that funded affordable housing. “If the state wants regional planning to be successful,” he concluded, “we need more investment.”

Peter Cohen, a consultant for East Bay Housing Organizations, gave ABAG staff credit for changing plans in response to advocacy and “truly embracing the importance” of strong anti-displacement measures. But he pointed out that intentions don’t always bring results. “In the last [housing plan] cycle, every jurisdiction was completely off base from what they were supposed to be doing” to produce affordable housing — so equity advocates need to keep pushing for stronger measures.

The MTC and transportation-justice activists are farther apart. Operating transit is important, said Mayor Green, but “there are plenty of worthy [construction] projects that have perhaps a greater benefit for reducing congestion and greenhouse gases.”

But back in Oakland, said Phelps, “The buses are breaking down, we’re not getting buses on time. And we have to suffer fare hikes and service cuts. We need more money for operations so we can get by.”

Jean Tepperman
Previous articleKreayshawn Has a Video Game
Next articleThursday Must Read: Batts Quit After Bad Report; Jordan Expected to Take Over OPD