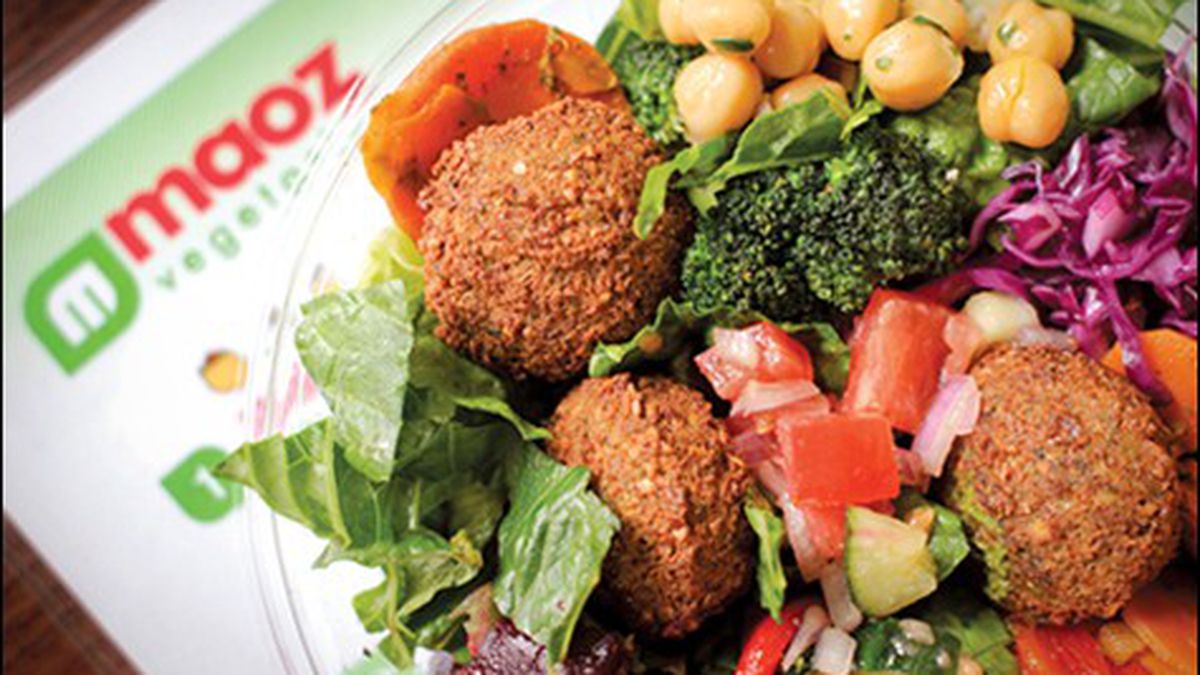 In the era of Slow Food, what's happening to fast food?

This is fast food in the era of Slow Food. A new sensibility is spreading through a $170 billion industry, transforming menus and marketing schemes like some slowly advancing, pierced-eyebrowed army whose soldiers won’t wear leather or eat cheese. Now that Taco Bell sells “Drive-Thru Diet” items and McDonald’s uses grass-fed beef — not exclusively, but it’s a start — “fast food” and “junk food” are no longer necessarily synonyms.

The newest kid on the block is Falafilo. Its spic-and-span shop a few blocks from Oakland City Hall opened in July; shops in Berkeley and Richmond are set to open within weeks; CEO Ernest Taraji plans to open 1,300 shops nationwide and 200 in Canada within months. Based on a trade-secret recipe and methodology that Taraji says “takes felafel back to the pharaoh’s time,” Falafilo’s signature sandwich is a 100 percent vegan felafel-burrito-panini hybrid. Diverging from familiar felafeldom, its chickpea filling isn’t deep-fried. This keeps the calorie content per sandwich under 300. Sealed tightly inside a tortilla-ish pita, served with optional head-poppingly hot sauce, the contents don’t gush out.

That’s a far cry from the flamboyant fare at Maoz, Falafilo’s chief competitor in the Will America Ever Embrace Chickpeas? steeplechase. Both are highly ambitious felafel chains; founded in Amsterdam in 1991, Maoz has expanded around the world. Its irresistibly hip, tiled, vegetarian franchise near UC Berkeley, open since March, has a salad-bar format sporting a dozen fresh-daily seasonal salads and sauces with free refills. Tasting like health itself, its cole slaw alone is worth the jaunt. Maoz stays open well after midnight.

“Felafel deserves a lot more credit than it’s been getting in the United States,” said Taraji, who hopes to raise its profile. “You can see how a culture changes right before your eyes. Fifteen years ago, if you told someone that someday he would line up to buy a cup of coffee for more than 59 cents, he would have said you were crazy. But now people line up to pay five dollars for a cup of coffee at Starbucks, and they find ways to justify that.”

Ubiquitous elsewhere, felafel hasn’t quite caught fire stateside. Maybe that’s because it’s messy. Maybe it still feels too foreign. Fast food wasn’t born here. But starting circa 1921 with White Castle, a motorized, multitasking, meat-eating America boiled down the genre to burgers and fries. So enmeshed is this meal with our national identity that even vegans sometimes crave replicas.

Burger King’s two trademarked meal-sized salads are the Tendercrisp and the Tendergrill. Both include chicken and three kinds of cheese. BK’s breakfast wrap is bacon-packed. “Choose a snack wrap,” thunders the web page promoting McDonald’s wraps. You have three choices: Bacon & Cheese with Angus beef, Mushroom & Swiss with Angus beef, and Deluxe with Angus beef. It’s a Spam-Spam-Bacon-and-Spam situation. While both the San Francisco Soup Company and Jamba Juice prove that fast-food chains can make delicious, adventurous, and sometimes fleshless salads and wraps, their old-guard counterparts evince a deep fear of scaring away carnivores.

Taco Bell has always served meat in tortillas, so at least it can’t be accused of hypocrisy. In some ways, Taco Bell is the leader of the old-guard fast-food pack. Sure, its standard menu is hardly artery-cleansing: Witness the 700-calorie, 2,100-milligrams-of-sodium, 30-grams-of-fat Grilled Stuft Beef Burrito. Even the meatless 7-Layer Burrito, which includes “reduced-fat sour cream,” has 510 calories, 1,420 milligrams of sodium, and 18 grams of fat. But Taco Bell’s Drive-Thru Diet line, introduced late last year, features seven items with less than 350 calories and less than 9 grams of fat. Its scrumptious Fresco Bean Burrito has only 2.5 grams of fat. It’s right out of Subway‘s We-helped-Jared-Fogle-lose-245-pounds playbook. Another plus is that Albany’s Taco Bell sports green innovations such as a solar-powered roof, low-flow irrigation, and energy-saving lights and windows.

What’s new about the new fast food isn’t just heart-healthierness, higher fiber, and semi-sustainability. It’s also an aspiration for sophistication. In Europe, McDonald’s operates a sub-chain of coffee-pastry cafes called McCafe. Stateside, McCafe manifests as a range of cappuccinos, mochas, and knockoff Frappuccinos made with 100 percent arabica coffee. (With 550 calories, 24 grams of fat, and 71 grams — that’s about seventeen teaspoons — of sugar, a high-fructose-corn-syrup-spiked McCafe Caramel Frappe will undo several trips to the gym.) Burger King now serves 100 percent arabica iced mocha, roasted in Washington State by Seattle’s Best, a forty-year-old firm that was small and family-owned before being bought in 2003 by — surprise — Starbucks.

Both boutique and actually better for you is Nature’s Express, a truly remarkable, scrupulously vegan fast-food chain founded by an Arizona oncologist committed to reducing America’s cancer rate by improving what Americans eat. Baked fries join a range of meatless burgers on your choice of black-bean, almond-sunflower, lentil, Boca, and “chick-un” patties on whole-wheat or rosemary buns, along with international exotica such as carrot-cashew paté and a juicy tofu-corn-quinoa salad.

“I’m going to ride that trend for the next twenty years.”