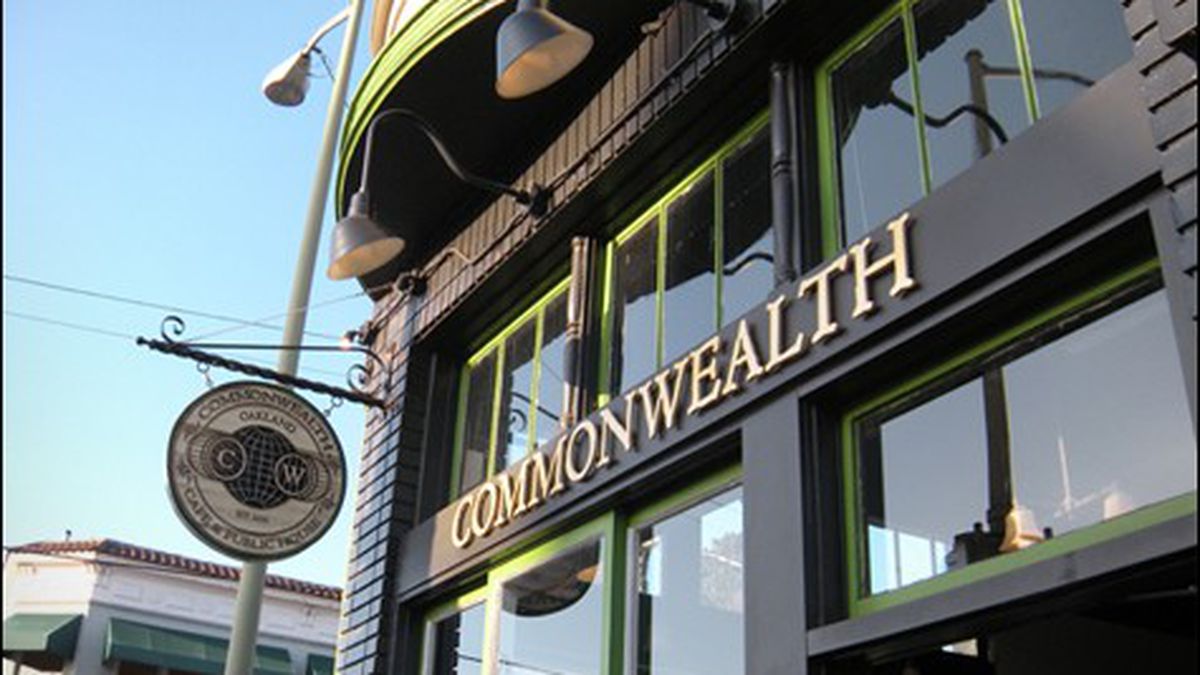 It’s not usually this crazy,” said a bartender, apologetically, and, no shit: It was before noon on a quiet stretch of Telegraph in the gray half-mile or so between Koreatown and Temescal, and CommonWealth was already warm and window-fogged, clotted with jerseyed bodies ready to watch Italy take on Spain in the EuroCup finals. The particulars of this match’s timeslot — 11:45 a.m. on a Sunday — and of the fact that apparently it is a capital sin to watch soccer sober made for some wonderfully cognitively dissonant tableaux: A young woman with red-and-yellow hearts painted on her cheeks balanced a bowl of wholesome-looking granola and yogurt ($6) in one hand and a decidedly un-wholesome looking stout ($5) in the other; groups greeted each other with a bleary-eyed “good morning” before almost immediately cheersing with overflowing beers. The pub’s “beermosa” ($5), a so-crazy-it-just-might-work combination of Ale Industries Orange Kush and Odwalla orange juice, was in expectably high demand. Accented strangers piped into each others’ conversations — it was almost impossible not to, given proximity — and every so often a robust “Eeee-tal-ya” or “Es-pan-a” would ripple through the crowd. A quiet, brunching couple — she with her crossword, he with his book, both with lattes and frittatas and sitting surrounded at exactly crotch-height by hollering foreigners — looked piqued.

Which was understandable, if not entirely in the spirit of the day: CommonWealth, is, after all, a pretty civilized place most of the time, proper in black and white and lime green, with art on the walls, dark-wood accents, and a polite little bookshelf sitting next to the bar, cluttered with well-loved paperbacks (notable title: The Ultimate Guide to Being Scottish) and various vintagey tchotchkes. On the menu, tea is referred to as “cuppa” — one of the owners, Ross Adair, is an honest-to-god Scotsman, which lends the place a welcome dose of verisimilitude — and the beer menu contains an entirely respectable list of British beers, delineated by nation, alcohol content, and size of pour (plus an also-very-respectable list of hyperlocal draughts, from the likes of Oakland Brewing Company, Dying Vines, and so on). When the bar runs out of a certain beer — which it did on Sunday many times, twice before noon — a bearded barback will hop on top of the bar and tape up a little handwritten sign saying “Oot!” It’s all very charming.

In an interview with an Express food writer a few months after it opened in 2010, co-owner Pete Jeffryes explained that, as a pub, CommonWealth “is a place to enjoy life — and beer — rather than a place to get drunk,” which is exactly right: There’s no hard liquor, for one, and on a Friday or Saturday night, it’s low-lit and quiet, full of neighborhood types and homesick expats, small groups and laptop-tappers, not a rowdy bunch in sight. Even the foosball table — a magnet for rambunctiousness at any bar — is respectful and tidy, with soon-to-be-players signing up on a neat list tacked to the wall; suffice it to say that on most other Sundays of the year but this one, brunch is a decidedly more sedate affair.

By 11 a.m., it was unusually crowded; by noon, uncomfortably so, though everyone seemed to be enjoying themselves very much. By 12:30, there was a small contingent of people standing outside, craning their necks to watch through the window. (The following day, a bartender told me it had been one of the bar’s biggest ever, and frankly, it’s hard to imagine how it wasn’t the biggest, as any more people shoehorned into that space might have actually caused the whole place to explode out onto Telegraph). The game was a good one, according to the man standing next to me, a Spanish expatriate who seemed very knowledgeable about such things. When Mata issued that final shot and it was clear the whole thing was over, the entire room exploded into sloppy hugs and impassioned chants and multilingual shouts of celebration and/or dismay. Cash and trash-talk were exchanged and beers downed happily. Even the brunching couple looked up from their crossword.

Editor’s Note: On Sunday, July 8, five days after this article was published, CommonWealth fell victim to a fire. It will be closed until further notice.