.FuseBOX Serves Food for the People

In an unlikely corner of West Oakland, Korean and Japanese bar bites — at working-class prices. 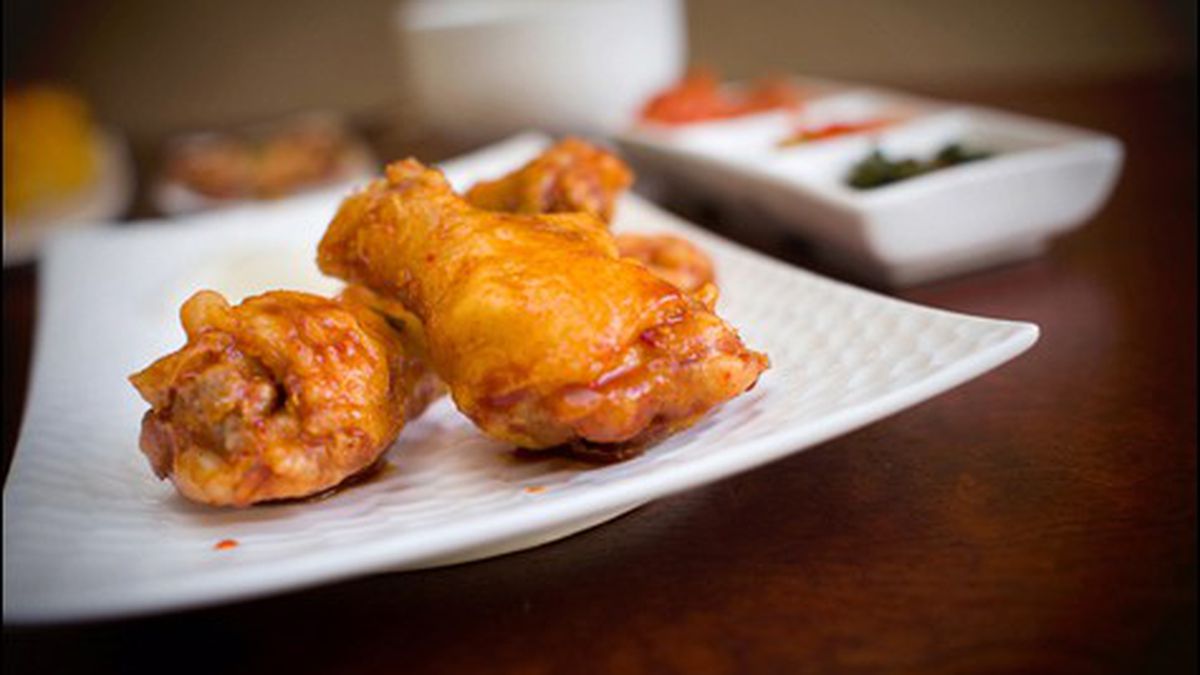 The starkly industrial West Oakland neighborhood where chef Sunhui Chang has opened his first restaurant, FuseBOX, may or may not qualify as a “food desert,” according to the various indices that determine such things, but it most certainly is something of a restaurant desert. Heck, drive this far up West Grand and you won’t see too many commercial businesses of any sort — the stretch of Magnolia Street where FuseBOX sits is taken up mostly by boxy, anonymous warehouses.

No wonder Chang’s colleagues in the food industry thought he was crazy when he told them he wanted to transform a tiny seven-hundred-square-foot space on that block — a former furniture showroom — into a Korean restaurant. Who would eat there?

But Chang, a West Oakland resident, fell in love with the area, which reminded him of his childhood in Incheon, South Korea. He remembered how his father — a “foodie” before anyone coined the term — would talk about finding wonderful, lively restaurants hidden away in rough-and-tumble industrial areas.

Unlike other ambitious restaurateurs who come into a seemingly undesirable area with plans to remake it in their own image, Chang likes West Oakland the way it is. He just wants to give the working-class folks who live and work there a place where they can get a tasty, inexpensive meal.

And so FuseBOX was born — the name chosen not because of Chang’s fondness for fusion cuisine (though there is a little of that), but because he hopes the restaurant will provide a spark of energy to a heretofore sleepy part of town.

For now, FuseBOX is only open for lunch from Wednesday to Friday, and only cash or checks are accepted. The exterior of the place is fairly bare-bones: The only indication that there’s a restaurant is a little signboard on the sidewalk (“I bleed kimchi,” the tagline reads).

But inside, the dining room — with its tasteful, wood-accented simplicity — is bustling, even at two o’clock on a Wednesday afternoon. Most of the diners seem to be people from the neighborhood: burly laborers of various stripes, tattooed artist types with studios in converted warehouses nearby, and so forth.

As for the food, the menu at FuseBOX consists mainly of riffs on Korean and Japanese bar fare — things you’d eat while enjoying a cold beverage at an izakaya or soju bang. What’s impressive is how affordable the food is, in spite of the fact that Chang sources high-quality ingredients and makes just about everything from scratch. During both my visits, everything on the menu was less than ten dollars, tax included.

Most of the dishes are small plates, and the best approach is to order a bunch of things to share. Start with some grilled meat- or vegetable- skewers — there’s a small selection on the regular menu and, usually, several more options on the daily specials board. I especially liked a seasonal special of sugar snap peas, which had been coated in an umami-rich miso-butter glaze, and a sancho skewer that featured pork belly, oyster mushroom, and scallion. Be forewarned: The portion size for each skewer is quite small (reasonable, given that many are just a dollar). Double or triple up on each item if you’re sharing, or else just plan to order a second round of your favorites.

There are a number of other noteworthy appetizer-ish items on the menu. I wasn’t a huge fan of the bland bacon-wrapped mochi (Japanese glutinous rice cake) though the dipping sauce that came with it — a mix of spicy Korean mustard and pickled mustard grains — was tasty enough to eat on its own. Much better was Chang’s take on Korean fried chicken, which was neither as sweet nor as spicy as the garlic-soy versions I’ve had at more traditional soju bangs. Instead, these wings were deeply savory — reminiscent of good buffalo wings, except crispier and without the goopy sauce.

Chang also makes a mean sandwich, as illustrated by his Busan torta: cubes of not-too-fatty pork belly, cabbage slaw, pickled zucchini slices, and a heavy dose of house-made mayo. It was as decadent as any of the porchetta sandwiches that were all the rage last summer.

Finally, there is a selection of “Ban Sets,” which are worth ordering so that you can sample the restaurant’s creative banchans (little side dishes). Each set comes with a choice of meat — karaage (Japanese popcorn chicken, basically), kalbi (beef short ribs), or pork belly — though vegetarians can opt for just the side dishes and rice.

But the banchans are the star. Chang makes about ten different kinds of kimchi, and of these his very traditional — and quite pungent — napa cabbage kimchi was my favorite. There was also a kimchi made from komatsuna leaves and one made from the crowns of baby bok choy. Aside from the kimchis, there was a panoply of tiny pickled things, most of them wonderful — shiitake mushrooms and green mango slices and carrot tops. And cutest of all: five individual miso- and sesame-dressed edamame, served on a long rectangular plate.

The service at FuseBOX was friendly but scattershot at times — some of the staff weren’t entirely familiar with the menu, and they were slow on the uptake when it came to knowing which items were sold out. And one time I showed up at the restaurant at noon on a Friday only to find the place closed: The chef was sick that day, so they shut the entire operation down.

But assuming those kinks are ironed out, it’s exciting to look ahead toward the future: In addition to expanding his hours to offer dinner service — just on Saturdays to start — Chang also hopes to make better use of the outdoor patio in front. His dream is to set up tables with built-in grills, like they have at Korean barbecue joints — maybe a jury-rigged sweet potato roaster, too.

Imagine that: Grill-your-own Korean barbecue and piping-hot roasted yams out under the stars. Not too shabby, West Oakland. &#8;

Next ArticleMid-Week Menu: Independence Day Food Truckery and an Array of Openings and Closings