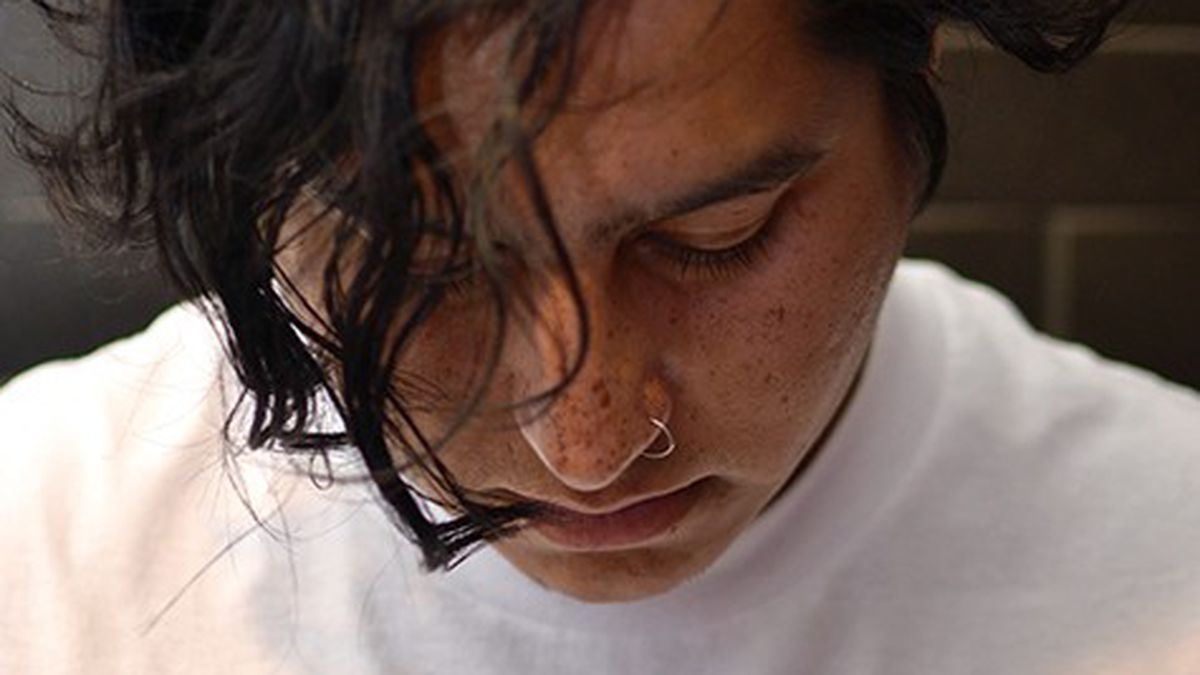 On his collaborations with Dev, eight-bit-sound, and new EP Bittersweet July, Pt. 2.

East Bay producer and DJ Michael Solorzano got the moniker NanosauR from a 1990s computer game in which an intelligent dinosaur travels back in time to save his kind from extinction. The reference speaks to NanosauR’s eight-bit-inspired sound. Whether making lo-fi, glitchy instrumentals for his solo project or producing glossy club bangers, a nostalgic, early digital aesthetic informs his approach. He has produced for internet-famous rappers such as Antwon, Lil B, and Chippy Nonstop, but his recent work with singer Dev, a high school friend and emerging star, has thrust NanosauR into the world of commercial pop. Bittersweet July, Pt. 2, a Dev EP featuring NanosauR’s production, became the bestseller on iTunes’ electronic music chart earlier this month — a significant feat for a 26-year-old who still makes music out of his parents’ house in Oakley.

Though he boasts a sizable following as a solo artist, NanosauR prefers operating behind the scenes. He frequently spins DJ sets at various Oakland and San Francisco clubs, but as a producer, NanosauR partners with artists who already have marketable images and flamboyant Twitter personas so that he can avoid the spotlight.

“My solo music hasn’t been my number-one focus lately,” NanosauR said in an interview. Still, the beginning of 2014 saw the release of his EP, Bottled Promises, which features down-tempo tracks with breathy vocal samples and a somber use of Auto-Tune. The project’s melancholic sound evokes moody R&B act The Weeknd as well as one of NanosauR’s biggest influences, The Postal Service. It was widely heard and appreciated, but the producer has since been happily preoccupied with making music for Dev. “Going hard for someone else means my sound is still going to get played,” he said.

Dev and NanosauR met on MySpace in 2006. Two bored high school kids in the East Bay suburbs, they discovered they lived near each other and began to collaborate. Shortly after Dev started college, producers The Cataracs heard her cover of an Amy Winehouse song online and invited her to work with them in LA. The move was fortuitous: Dev became known for her vocals on Far East Movement’s Cataracs-produced hit, “Like a G6.” Meanwhile, NanosauR took the DIY route, quietly releasing tracks on SoundCloud and collaborating with friends from the local hip-hop scene. Although his recent projects with Dev under the label Rica Lyfe Records have exposed him to the world of professional recording, he typically works alone in his bedroom.

While Bottled Promises explored lo-fi instrumentals, NanosauR’s work with Dev demonstrates a knack for composing grandiose tracks with radio potential. Following his solo EP, the duo released their first joint effort, Not All Love Songs Have to Be So Sad. It included new songs with both of their vocals as well as a track from their MySpace days, “Everything I Do.” The collaboration was a mellow, indie warm-up to Dev’s more polished pop EP, Bittersweet July. Produced by NanosauR, Bittersweet July is an upbeat party soundtrack pulsating with house beats, climactic build-ups, and bass drops. The release was well received and peaked at sixteen on Billboard’s Dance/Electronic Albums chart.

NanosauR’s intricate production set Bittersweet July apart as a pop record. Though elements of trap and EDM are present in his beats, he adds intriguing twists to those popular genres. Seemingly incongruous styles are blended together on the same tracks. His vintage video game-inspired sound kit is a nod to his indie roots.

Immediately after the record’s release, NanosauR and Dev went to work on their follow-up EP, Bittersweet July, Pt. 2. The second project carries over the upbeat bounciness of the first EP, albeit with more sophistication. While Bittersweet July‘s strength is its variety, Pt. 2 is darker, bass-driven, and more danceable. NanosauR and Dev’s collaboration seems to have become more cohesive. His thumping beats reflect the self-assured swagger she projects in her lyrics. His synth-driven melodies complement the catchiness of her hooks.

“I look up to Dev as a mentor, to be honest,” NanosauR said. “I’ve never been able to do as much as I have been doing until now. I really admire how hard-working she is, as well as her whole team, which I’m very thankful to be a part of now. It means a lot that she believes in me so much that she lets me produce these crazy beats for her.”

Despite NanosauR’s reluctance to be the center of attention, his work with Dev seems to be getting his music the recognition it deserves. In the months leading up to the release of Bittersweet July, Pt. 2, he toured the country with Dev, as her DJ. “Seeing how her fans react to the music in person is so cool,” he exclaimed. “It pushes me even harder to top myself with the music we make.” Though they initially took divergent paths, NanosauR and Dev have thrived in their renewed creative relationship. NanosauR doesn’t have plans to move out of his parents’ place yet, but his propensity for pop production will undoubtedly lead to bigger things.