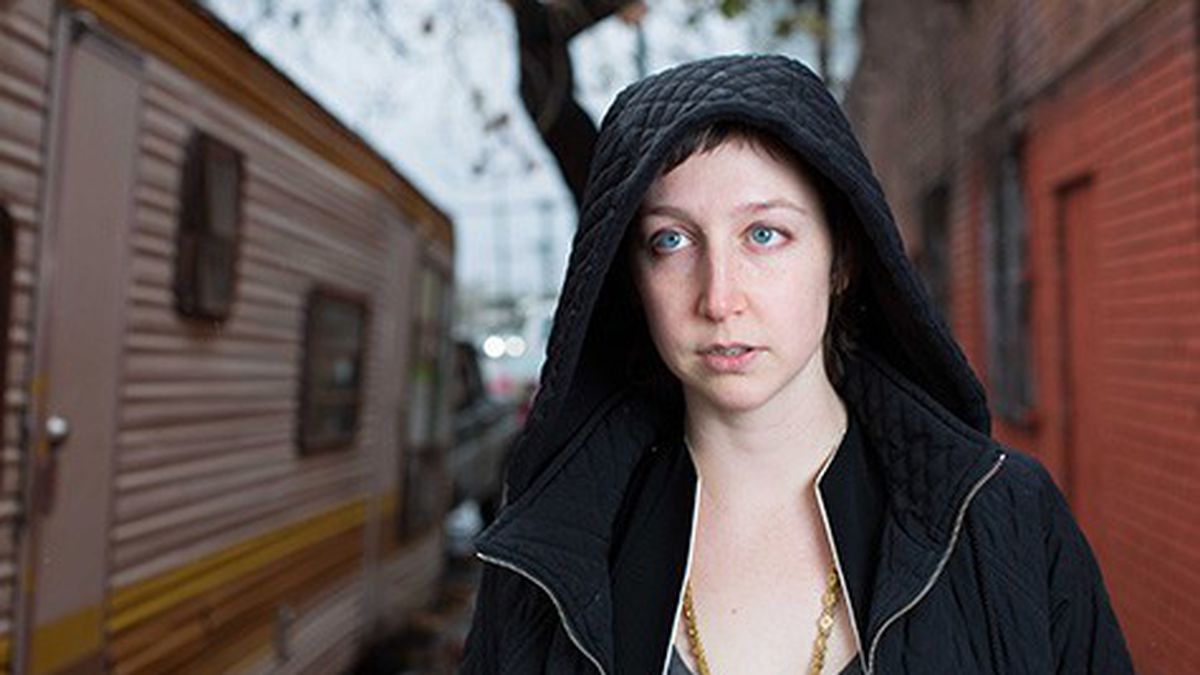 Juliet Gordon wandered through Chapel of the Chimes, scanning the faux book spines that were stacked floor-to-ceiling in Oakland’s historic columbarium. “I like the play on words,” she said. “‘Tomb’ and ‘tome.'” Gordon wore a black-on-black ensemble, except for oxblood-colored boots, and recalled visiting the catacombs in Sicily. She strayed from a pack of fellow tourists and found that “there were human remains everywhere. I didn’t realize they would be so exposed.” And, Gordon said, “It was the first time a melody came to me completely.”

The melody appears on “Sicily: Catacombs,” a song from Gordon’s second album as the band The Classical, named in homage to a song of the same name by English post-punk band The Fall. Diptych, which was self-released earlier this month, is one of the finest local releases of 2014. On “Sicily: Catacombs,” a faint piano pitter-patters in time to a slight percussive pulse and Gordon carefully repeats a hesitantly ascending vocal melody. With slight clinks of metal and a deliberate, slow pace, the song evokes a funereal march. There’s no chorus, and Gordon’s words underscore the drama. Sober recollections, such as There I spent an hour with my hand upon my heart, give way to flights of imagination: Strung up by their necks in rotten dresses/wheezing down at their weeping fathers/masturbating, gargling salt water.

Gordon, who is 24, speaks with an ambiguous accent. It’s somewhere between Appalachia and aristocracy. “People think I’m snobby because of my accent,” she admitted, “but I think it’s because I took acting lessons as a kid.”

Gordon grew up outside of Washington, DC, where she took piano lessons and resolved to become an actress at a young age. She appeared in plays, auditioned for conservatories, and then attended college in Colorado Springs, where she studied Classics. There, her conception of drama and its applications began to expand.

Gordon described The Classical as “Brechtian,” by which she meant, “If you come to a show of The Classical, you shouldn’t feel like you’re in the right place. … It should be confrontational, but the crowd must be invested.” For example, “Kanye West is didactic, but you’re also there to experience triumph. That’s Brechtian.”

In Colorado Springs, she met Britt Ciampa, a composer and drummer who’d just graduated from music school, and joined The Classical as a collaborator. The two recorded an album, The Classical: A Mixtape in 2012. It’s good, but it leans on gloomy indie rock conventions, whereas Diptych surges with original creative invention. Ciampa and Gordon started working on Diptych in Colorado Springs and completed recording shortly after moving to San Francisco together about a year ago. Ciampa plays locally with jazz ensembles, while Gordon is pursuing work in voice acting. She’d like to voice audio books, but said she might have to start with porn.

In college, Gordon said, “I found myself enthralled by the ancient heart of things, especially the gross heart.” Like what? Pelicans. “‘The Blue Room’ is about a lucid dream I had where I have sex with a pelican, which is an ancient symbol for old men.” The opening song on Diptych, “The Blue Room,” is six minutes long and conveys the epic narrative scope Gordon admires in Brecht’s idea of theater. Indistinct grumblings and sizzling cymbal underpin a series of anticipatory lines by Gordon. Another pelican, she sings, warping the last word for a moment of feverish delirium. Shimmering, radiant keyboards resolve the tension briefly, and then Ciampa’s drum solo pivots the song toward a heavy outro.

That’s right: a drum solo. Diptych’s musical language is unusual in part because a lot of the melodic instruments are indistinct. They’re mostly midi samples controlled by Gordon on a keyboard, but they don’t always register clearly as guitar or piano. Rather, the music is full of evocative timbres, suspended between recognizable sounds without sounding explicitly electronic or synthesized.

Ciampa’s drumming is virtuosic, but only distracting when it’s supposed to be. In the context of such unusual sounds and song arrangements, Ciampa is free to shed the strictures of purely functional drumming in favor of rolls and cymbal work that sound more expressive, ornamental, and even showy. There’s little precedent for percussive accompaniment to songs such as Gordon’s, a fact that Ciampa smartly capitalizes on.

“There’s a lot of comedy and undercutting seriousness in these songs,” said Gordon. On “Driveby,” for instance, down-tuned vocal samples destabilize Gordon’s melodic acrobatics. She called it “chopped and screwed,” like the remixing approach. Another album highlight, “Deft with Language,” reflects the facetious tone of its title. In the song, her sarcastic speaker’s single side of a conversation lets listeners glean something about the oblivious halfwit she’s addressing. Diptych is full of play, pretend, and severity, with Gordon inhabiting diverse characters such as sycophant, deviant, and spy.

Helpful points of reference for The Classical include the most recent album by Circuits des Yeux, the work of Carla Bozulich and her Evangelista outfit, the cabaret sensibility of Marc Almond’s early solo work, and the sound design on Scott Walker’s last couple of albums. It’s telling that all of the artists The Classical brings to mind are considered mavericks: Gordon and Ciampa make music fit for a peerless school of their own.

In Chapel of the Chimes, a family walked by, frowning. Gordon suggested moving along, and she settled on a pew in a prayer alcove in front of a stained-glass window depicting passages from Psalms and Samuel. Live, Ciampa plays the drums and Gordon triggers samples while singing. Ideally, Gordon said, she’d like to sing in front of an orchestra, like Tom Jones, and swayed before the stained glass, invisible mic clutched convincingly beneath her chin. “Don’t worry,” Gordon said, suddenly aware of her surroundings. “I’m confirmed in the Catholic Church, so, if anything happens, just stand behind me.”