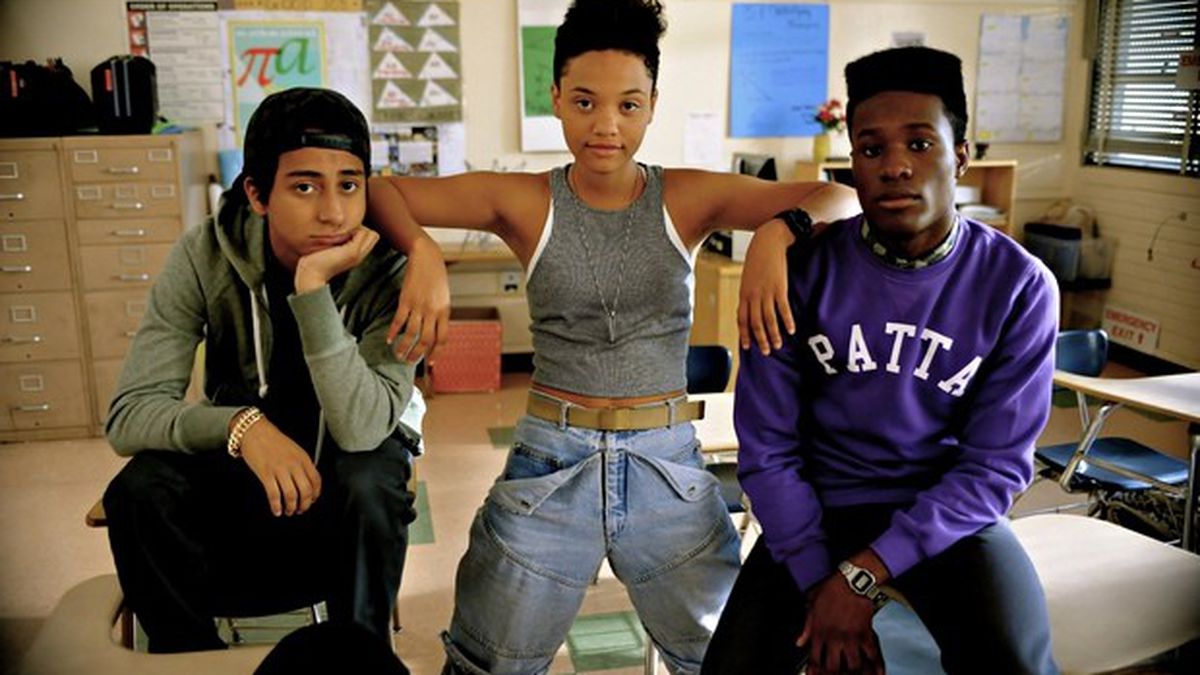 It’s one of the brightest, funniest comedies of the season.

In its advertising, Rick Famuyiwa’s Dope is careful to make sure moviegoers understand that its main character, a teenager from Inglewood (LA County) named Malcolm (Shameik Moore), is not your usual movie-style inner city African-American hard case. In fact, Malcolm and his little band of nonconformists – lesbian wisecracker Diggy (Kiersey Clemons) and ultra-nerd Jib (Tony Revolori) – pride themselves on their atypical ways. They have their own neo-punk band called Awreeohs, idolize Nineties hip-hop stars, and plan to move on to college. A lot of the kids they meet think they’re “too white,” but more than anything Malcolm dreads being a cliché.

As the movie’s tag line says, “It’s Hard Out Here for a Geek.” Writer-director Famuyiwa, a USC Cinema-Television grad who has specialized in Black-themed romances and family comedies, doesn’t let Malcolm and his friends exist in a fantasy bubble. As residents of “The Bottoms,” they get beat up and have their sneakers stolen at school like any other underdog, and face life-or-death decisions almost every day. That’s the world they live in and yet they nevertheless are what they are, unapologetically. So we get a curiously refreshing combo of Harold & Kumar plus Menace II Society. When they accidentally latch onto a backpack full of powder and are forced to navigate their way through LA’s demimonde to set things straight, the three rebels turn what might have been a bloody revenge actioner into one of the brightest, funniest comedies of the season.

Moore’s heroic chicken Malcolm is possessed of TV-commercial good looks; girls naturally pick up on him. Clemons’ short-fused Diggy has a tougher act to play — people think she’s a guy. All Revolori’s Jib has to do to cause a reaction is to make faces at the camera, the same thing he did as the bellboy sidekick in The Grand Budapest Hotel. All by themselves, they have the makings of a harmless sitcom. It’s only when they run into their violent fellow Angelenos that their personalities — and Famuyiwa’s expertise with dialogue and situations — sprout wings and fly.

The director and his cast have loads of fun with characters, including creepy businessman/fixer Austin “A.J.” Jacoby (Roger Guenveur Smith); A.J.’s hyper-sexy daughter Lily (Chanel Iman); Dom, the street-corner hip-hop critic and dope dealer (Rakim Mayers aka A$AP Rocky); Malcolm’s fave in the nabe, Nakia (Zoë Kravitz); and William Ian Sherwood III (standup comic Blake Anderson), the classic stoner-hacker-flipster-hipster white guy. Only one or two people get gunned down. Jokes about drones, Obama, the Darknet, Bitcoin, racial stereotyping (“Find the white people. Go to Coachella”), Breaking Bad, and urban brand wars (the Starbucks parody “Seven Bucks Coffee”) fly by in a big hurry. Malcolm’s summing-up monologue is short and to the point. He aims to be a “man of Harvard,” and it’s clear that Harvard needs him. But after his crash course in the streets in the midst of preparing for his SATs, does Malcolm really need Harvard? That’s a subject for sequelization.