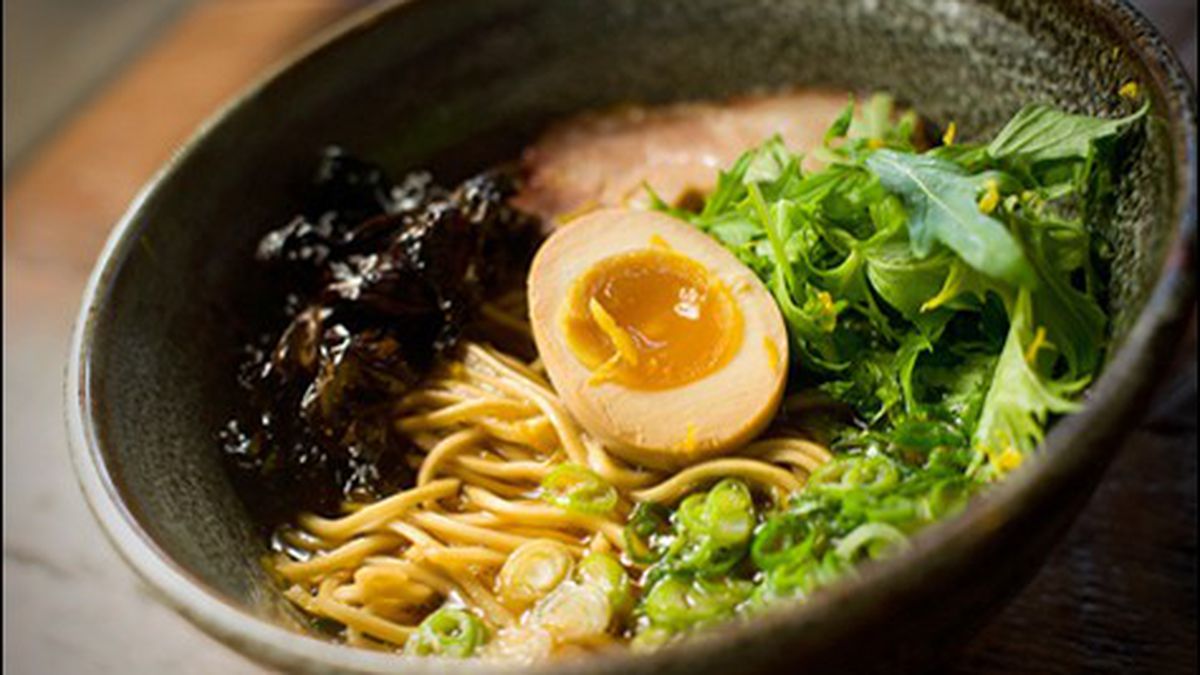 Does Rockridge’s New Ramen Shop Live Up to the Hype?

A trio of Chez Panisse alums fuses Japanese tradition with a Californian sensibility.

In Japan, ramen has as many regional variants — each with a solid constituency of diehards — as pizza does in the United States. So if, for instance, you’re from the southwestern island of Kyushu, you probably grew up eating wisp-thin noodles in a broth that’s thick and milky-white from the marrow released by long-boiled pork bones. If you grew up in Sapporo, then a bowl of miso ramen, topped with minced pork and kernels of sweet corn, might be your comfort food of choice.

And if you’re a kid growing up in Oakland at this moment in history, in ten or twenty years you might look back and recall when a newly opened restaurant called Ramen Shop established the Bay Area’s own unique style of ramen — one where the menu isn’t set until after the daily farmers’ market run, and where seasonal ingredients like Meyer lemon and Dungeness crab are given pride of place.

The buzz about Ramen Shop started as soon as the news first broke that three Chez Panisse alums — Rayneil De Guzman, Jerry Jaksich, and Sam White — were opening a noodle shop, and it’s only gotten louder as details emerged: The fact that Jaksich, the restaurant’s resident noodle-maker-in-chief, trained under a legit ramen master in Japan; that the trio had a six-hundred-pound noodle-making machine shipped in from overseas so they could make their noodles fresh daily.

And so the place has been packed since day one. During my visits the line never spilled into the street, as I’d feared, but the wait for a table or a seat at the curved ramen counter (the best spot to watch the chefs work) is often an hour or longer. Much of the hype is merited: I probably haven’t had a bowl of ramen in the East Bay even half as good as the ones I enjoyed at Ramen Shop.

One night it was a shio-tonkotsu broth — something along the lines of the porky, cloudy-white version mentioned above, incredibly rich but somehow less heavy than other tonkotsu ramen I’ve eaten (though I saw Jaksich ladle a big dollop of rendered back fat into every portion). Another night it was a version of the Chinese-inspired dish, tantanmen: bright-red broth — spicy, intense, and studded with coarse-ground pork belly that had an appealingly chewy texture. Finally, there was the vegetarian miso ramen, some version of which is on the menu every night, and which boasts layer after layer of flavor: the sweetness of leeks cooked soft at the forefront, and underneath that an intriguing bit of smokiness from the addition of smoked onions and garlic.

The noodles and toppings are treated with similar care: The big bugaboo with Bay Area ramen is that the noodles are almost always cooked too soft; at Ramen Shop, they’re perfectly springy, with a slight nuttiness. Meanwhile, spit-roasted chashu-style pork was tender and unctuous, and soft-boiled eggs were cooked so the yolks had the perfect creamy consistency. For the vegetarian ramen, thick slices of king oyster mushroom — each bite bursting with juice — were the surprising star. Even a stalk of boring bok choy tasted sweeter and more flavorful than the run-of-the-mill variety. Every ingredient is impeccably sourced.

Still, I can understand some of the early blowback on Yelp and in the food-blogosphere. That can happen when your ramen is three or four dollars more expensive than the competition (though, to be fair, no one blinks when they’re charged $15 for ho-hum pasta). And if you’re the kind of ramen purist who measures every bowl of noodles against some fixed standard of greatness or authenticity — the ramen at Halu or Santouka, in San Jose, or some obscure ramen-ya you stumbled upon in Tokyo — you might be mildly disappointed.

The soup bases at Ramen Shop, while delicious in their own right, were so different from what I’ve had in the past that I didn’t find myself craving them later on — they didn’t trigger that part of my taste memory reserved for long-cherished comfort foods.

As White told The New York Times Magazine, “We didn’t want to make a place that is like a Japanese place, but a place that our Japanese friends will like.”

He told me he and his partners thought “it would be a little weird to replicate something without being honest about what our connection was.” At the best ramen shops in Japan, he explained, there’s an emphasis on things like where you get the chicken feet you use in your broth: “It’s so much about sourcing and getting the best ingredients you can get. That’s very Californian.”

Here’s what I will say: The flavors at Ramen Shop might be idiosyncratic — distant, distinctly personal cousins of classic shio or tonkotsu ramens. But what you find in every dish is the precision and obsessive attention to detail that I think is the hallmark of Japanese cooking.

For all the fuss over the noodles, the dishes I enjoyed the most — and where the restaurant’s Chez Panisse pedigree shines brightest — were the appetizers. A salad featuring raw halibut, shaved fennel, and slices of avocado and orange was a study in bright, clean flavors. A pickle plate, the best I’ve had in ages, had Sierra mackerel, mushrooms, soy-pressed carrots, and thinly sliced radishes: No two items had the same taste or texture. Best of all were De Guzman’s rice dishes: One was an intensely aromatic bowl of fried rice with musky wild nettles, plump shrimp, diced chashu, and a chili sauce imbued with the crunch of pulverized shrimp shells; the other a deceptively simple donburi rice bowl that was loaded with chashu, pickled ginger, pungent deep-red radishes, and a bright-orange raw egg yolk.

Black sesame ice cream sandwiched between two crumbly brown-sugar cookies was the perfect sweet note on which to end the meal.

It’s these dishes, rather than the ramen, that do still haunt my memories, even weeks later.