The East Bay medical company is one of a small but growing number that is sending doctors to people's homes to provide a more affordable, convenient alternative to emergency-room visits. 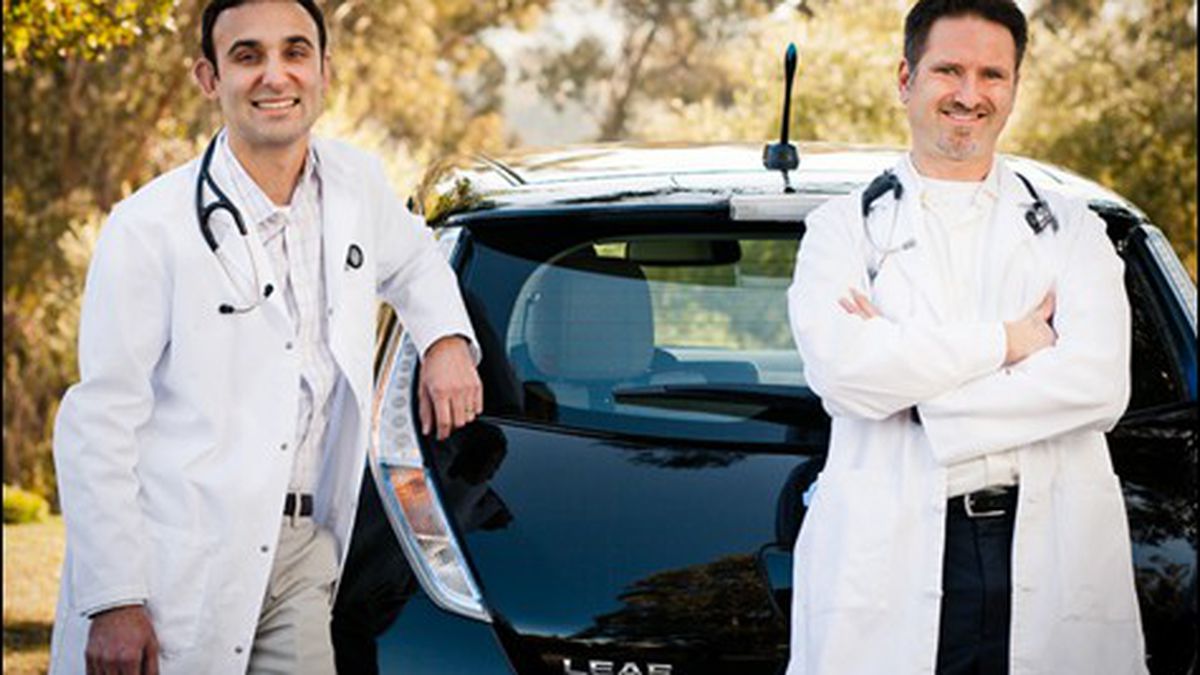 A few weeks ago, when John LeBourgeois’ daughter was struck with symptoms of the flu, he figured he had 48 hours to act. If he got her Tamiflu within that time period, he knew she’d have a greater chance of fighting off the virus. But because LeBourgeois doesn’t have health insurance, going to the doctor wasn’t an option. He also wanted to avoid the emergency room — the last time he’d visited Alta Bates’ with his daughter (to put three stitches in a cut finger), he wound up with a $1,400 bill. Instead, he called ER Direct, a house-call service in the East Bay, and within two hours, a physician assistant was at his daughter’s bedside, had tested her positive for the flu, and administered Tamiflu. The total bill: $380.

“It’s amazing that you can get a house call,” said LeBourgeois, a contract software engineer who lives in Emeryville. “… I was really impressed with it. … They’ve got some fairly sophisticated gear. I plan to use them for everything, for anything that’s not life-threatening.”

For people like LeBourgeois — i.e., those who make too much to qualify for Medicaid but can’t afford private health insurance — urgent-care house-call services like ER Direct are an increasingly attractive way to get health care. Though once largely the domain of the wealthy, doctors who make house calls are now catering to the populace as a more affordable, convenient, and personable alternative to going to the emergency room.

As a longtime ER physician, Caesar Djavaherian saw first-hand the financial costs of emergency-room visits — both to the health-care system and to patients. “If you’re less fortunate and you get sick, you can go to the ER and get all the care you want and then the government will pay for it,” he said, referring to the law that requires hospitals to provide emergency care, regardless of a patient’s ability to pay for it. “If you’re young and unemployed or you’re employed but have no insurance and you go to the emergency room, you’re saddled with a bill for a couple thousand dollars for something that may not be that significant in the end. We could save those people with being saddled with a huge bill, and we could do it in a more convenient and cost-effective way.”

So last January, Djavaherian, who lives in Oakland, launched ER Direct with his partner, physician assistant Sean Parkin, based in Berkeley. Along with another physician assistant, they treat any non-life-threatening urgent-care needs — from the flu to orthopedic injuries (back strains, sprained ankles), urinary tract infections, stomach pains, cuts, and bruises. So far, said Djavaherian, “The response has been pretty phenomenal.”

For patients accustomed to voicemail and being put on hold, ER Direct is shockingly accessible. Sometimes the doctors answer the phone themselves. They get between two and eight calls a day, and end up seeing about three or four patients per day, Djavaherian said. (Since they do triage over the phone, it often negates the need for a visit.) They also make a point to see patients quickly. Djavaherian said that from the time they answer the phone to the time they’re done with an appointment is usually two hours, and it’s not unusual for him to see someone within an hour of the patient calling.

Djavaherian and his partner were partially inspired by the health-care system in Europe, where house calls are much more common. That’s one reason why San Francisco physician John Horning decided to cater his urgent-care house-call practice, Urgent Med Housecalls, to foreign tourists. “Tourists are more comfortable with house calls — that’s what they’re used to,” he said. But it was also a practical decision. “US insurance will pay for house calls, but they’re not willing to pay a reasonable rate to sustain a living in the Bay Area. … Foreign travel insurance companies know they’re getting a good deal.” His clients often come from local hotels, which refer guests to him, plus an airline and even a golf course.

But with European economies suffering setbacks, Horning has seen a decline in tourist patients, especially those coming from Spain. Now, he’s seeing more tourists from Brazil, in addition to local attorneys, bankers, young people working in tech, and the elderly. He says his business has been steadily increasing since he started his practice in 2007, and he typically sees about three to four patients per day.

The number of doctors who make house calls in the Bay Area is still limited to just a handful, but it’s slowly growing here — and nationwide. Djavaherian said the trend seems to be especially apparent in densely populated areas that are also popular with tourists, such as New York, Orlando, Miami, Chicago, and Los Angeles.

But it’s the elderly home-care business that appears to be growing the most. According to Constance Row, the executive director of the American Academy of Home Care Physicians, a national home-care advocacy organization for elderly homebound patients, the number of physician house visits to elderly patients (both at home and assisted-living facilities) increased from 3.6 million in 2006 to 4.7 million in 2010. The reason for the increase, said Row, is that Medicare recognizes that “not only [is it] better care, but it also saves money.”

Djavaherian and Horning didn’t start their businesses with the intention of catering to the elderly, but they invariably end up treating those patients as well. Horning noted that Medicare increased its reimbursement rate for house calls in 1998, which helped drive the house-call business — but that things tapered off. “They were first excited about house calls and then they backed off,” he said. “Once they realized it was gonna keep people alive longer, I’m sure they calculated the future costs.”

Indeed, one of the main challenges to the house-call industry is getting US health insurance companies to reimburse the cost of the services. Horning said he has approached private insurers to see if they would offer house calls to their policyholders, the incentive being to keep people out of the emergency room. “Two of them got back to me and said, ‘We think what you’re doing is great and it would save us a lot of money, but you’re too small.'” However, he said he’s currently in negotiations with one private insurer.

The cost of a house call isn’t exactly cheap, but it’s still more affordable than a typical ER visit. The base cost for ER Direct’s house call is $275; Urgent Med Housecalls charges $265 for a basic visit. Prescriptions are another $25 to $50. Patients can pay with their health savings account or a credit card, and some people have even had luck getting reimbursed by their health insurance (if they have one), although it seems to work for some and not others, Djavaherian said.

Most of his patients are not unemployed, down-and-out types. Rather, they’re young professionals. Some are self-employed. Businesses like restaurants and bakeries also find ER Direct’s services useful, like when a chef cuts his finger and can’t leave to go to the hospital. Most find ER Direct via Google.

In many ways, the growth of house-call doctors also has to do with technological advancements. Djavaherian carries an iPad with him to have patients fill out HIPAA forms, and medical records can be sent electronically, or printed via a wireless printer. Prescriptions and discharge instructions can also be printed on the spot. Patients can also easily pay with the credit-card slider that attaches to the iPad.

Thanks to the portability of medical equipment, Djavaherian can check blood pressure, heart rate, and oxygen saturation; administer tests for flu, pregnancy, and urinary tract infections; and even do blood work. ER Direct also contracts with a company that does X-rays. “This type of industry is now doable, whereas ten years ago it wasn’t a possibility,” said Djavaherian. “We’re really trying to prevent people from going to a central location for their health care because it’s so much more convenient at their home. We’re not compromising any of the services or their care.”

Besides convenience and affordability, one of Djavaherian’s other goals was to reduce waste. He drives a Nissan Leaf electric vehicle to appointments, and cuts down on paper waste thanks to his iPad.

The whole point is to make care more convenient for the patient than the doctor, which Djavaherian admits goes against the current paradigm in health care. “It’s not the easiest lifestyle; not a lot of physicians would choose to do it,” he said. “You’re essentially on call all day. It’s kind of turning the system upside down and doing patient-centered care instead of physician-centered care. There’s still a lot of barriers.”

Since making house calls is not as financially lucrative as working at a hospital, Djavaherian still works as an ER physician at North Bay Hospital in Fairfield. And while his business is getting to the break-even point, he says making money was never his goal. “It wasn’t motivated by making a lot of money,” he said. “It’s more innovative, going beyond the old-school house call where someone diagnoses you and walks away.”

But Constance Row of the American Academy of Home Care Physicians doesn’t think urgent-care house calls catering to the non-elderly will proliferate beyond the small handful that now exists. “There will always be a smattering of people, but I doubt it will be very prevalent because there are too few primary care doctors as it is,” she said. “House calls are more time-consuming than seeing people in an office.”

Granted, doctors who make house calls for urgent care are not meant to replace primary care physicians. Djavaherian said they could act as a bridge between primary care and the emergency room, but given the nature of his service, it’s more practical for episodic care.

Yet with the looming health care reform changes, specifically the one that would require most people to obtain health insurance coverage going into effect in 2014, the lack of primary care physicians may boost house calls. “There’s not enough primary care doctors to handle the demand,” Djavaherian noted. “So we would handle the overflow.”

Horning said he believes the new health care law will also create greater demand for more personalized care. “People don’t want to stand in line and take a number,” he said. “And Obama’s health care is gonna put everyone into this big mess.” According to the US Census, 49.9 million Americans, or 16.3 percent of the population, were without health insurance coverage in 2010, the most recent numbers available.

Indeed, while home care has its niche, American health-care culture doesn’t appear to be embracing the European model just yet. In fact, Djavaherian said he’s planning to open an urgent care clinic in Montclair. “Sometimes people call and they’re expecting a physical location,” he said. “There’s an un-met need here.” He hopes to have the clinic up and running in late-June.

Next ArticleSwan’s Market Pops Up on Friday Nights