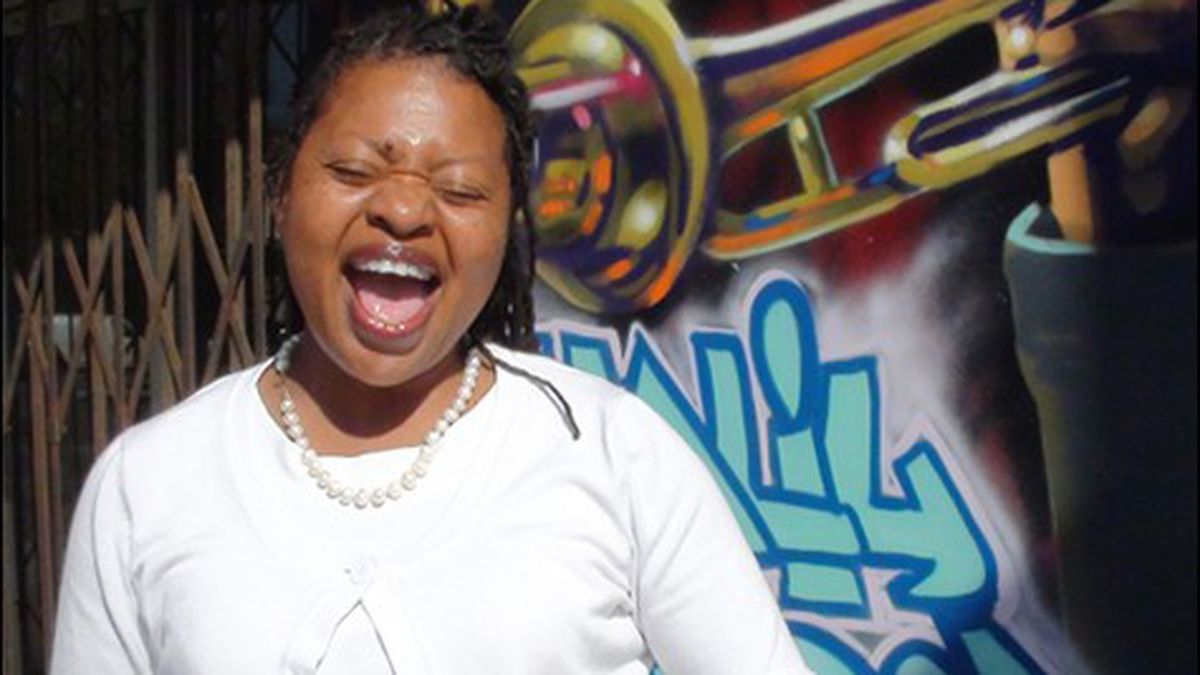 Destiny Muhammad Masters the Harp and the Hustle

At fifty, the jazz harpist reflects on her twenty-year career.

Destiny Muhammad and I are sitting side-by-side at downtown Oakland’s Awaken Cafe. Muhammad has black dreads dotted by a few white hairs and wears a flowing silk blouse. My hair is dyed black, with thick bangs, and I’m wearing a T-shirt, jeans, and Converse. Demographically, we represent an Oakland in flux.

“What’s that you called it?” Muhammad asked.

“Yeah, that. Well, I call it opportunity.”

Muhammad attended high school a few miles from where I was born, around the same time, the late Seventies, in the South Bay of Southern California. She lived in housing projects and took public transit — three buses she said — to be one of four African-American students attending Torrance High School.

“You know I’m ’bout to work that system,” Muhammad said.

It’s the unofficial theme of Muhammad’s life. A classical and jazz harpist who celebrates her fiftieth birthday and twenty years as a musician in a concert on Sunday, November 18 at The Malonga Casquelourd Center for the Arts, she began her career playing for tips at Bay Area farmers’ markets with only four songs in her repertoire. “I pimped that idea,” she said, proudly.

The oldest in her family, Muhammad went to cosmetology school after she graduated high school and opened a barbershop in her hometown of San Pedro. While she excelled in high school music classes, mostly as a singer, she dedicated herself to working, all the while knowing the instrument she wanted to play despite having never seen it in person. As a young girl, she watched Harpo Marx play a harp on television and it stuck with her — the graceful curves and delicate sound from the large string instrument. By the time the harp reappeared in her life, Muhammad was thirty, managing the barbershop with her mom. The best friend of her then-boyfriend built harps, and when she walked into his studio, the attraction was too strong to shake.

“It was the return of the harp dream,” Muhammad recalled. “I kept thinking, ‘Why do I feel this way?'” Eventually, she gave in and bought a harp with no idea how to play it. She took lessons from a woman who first denied her, saying she only taught children.

“There I was, thirty years old, learning ‘Twinkle Twinkle Little Star,'” Muhammad said, adding that some of her most formative life experiences began with those harp lessons. “When I started playing harp, I had friends who said, ‘You too old, you too black, and we don’t do that.’ I said, ‘Click, don’t call me no more.'”

When Muhammad moved to Alameda in 1994, a few years after she started playing harp, she worked odd jobs in between practicing Celtic folk and classical harp songs at farmers’ markets. Playing for free led to a decade of paying gigs at coffeehouses, restaurants, and private parties. It also accidently led her to jazz, a style she had always wanted to play. Khalil Shaheed, the founder of Oakland’s Oaktown Jazz Workshops, heard Muhammad at a market and invited her to a jam session.

“Those folks ran all over me,” she said. “There was a lot of clapping and laughing, and I really didn’t know what was happening. When I walked out, I said, ‘One day, I will write you all a check for playing with me.'” Muhammad spent three years studying with Shaheed — “I became his oldest student,” she said — and that’s when she learned the roots of jazz.

Jazz harpists, the few that have existed, have historically struggled for acceptance. In the Sixties, Dorothy Ashby changed the image of the harp from a cute and sweet classical accent within jazz expression to an integral component of song structure. The harp can be played softly, replacing a piano’s lush textures, or hard, adding percussion to uptempo bebop. Other jazz harpists included Adele Girard, who was married to clarinetist Joe Marsala, and Alice Coltrane, widow of saxophonist John Coltrane — both accepted in part because they were the wives of traditional jazz musicians.

Muhammad also struggled to evolve past her community-embraced “harpist from the hood” image to that of a serious jazz artist. She spent three years studying under Shaheed, and by 2008, local saxophonist Richard Howell changed his quartet to a quintet to accommodate her. Last year, she headlined The Jazz Heritage Center’s “Women in Jazz” concert. Her birthday concert will feature the caliber of musicians Muhammad once vowed to write checks to, including Blue Note artist Eddie Gale and bassist Ken Okada. Muhammad is working on an album of original music and planning a Dorothy Ashby tribute album, in between teaching private harp lessons and being a lifelong student herself.

“I’ll be learning till I jump off the planet,” Muhammad said. “The opportunities are so vast. Once you see it, you got to get your hustle on.”