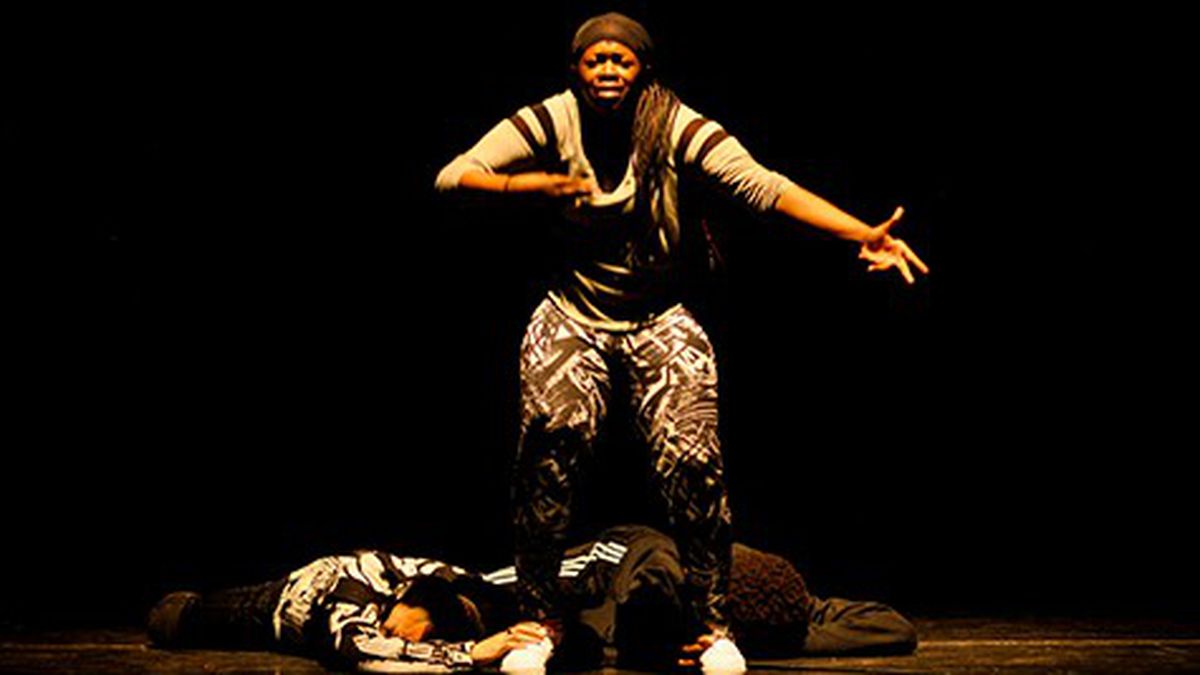 In 'Seed Language: A New Identity,' dancers move through the pain of racism in America.

Early on in Seed Language: A New Identity, a young woman playing Alicia Garza, co-founder of Black Lives Matter, recites the names of women who have been killed by the police. Four dancers hang from the rafters on wires above her, evoking bodies hung from trees. As she says the names, the hanging dancers flip, alternating between hanging feetfirst and headfirst. Other dancers walk slowly around the stage, some collapsing to the ground as more names ring out. It’s one of several startlingly powerful moments in a show where words and movement frequently combine to create a greater whole. It’s also not the only time the production, which opened at Laney College’s Odell Johnson Theater last weekend, delves into death and loss.

Nicole Klaymoon, one of the show’s artistic directors and the founder of the Embodiment Project, a San Francisco street dance company, thinks that, as a society, we would benefit from more collective mourning. “When you talk about state violence and the sanctioned violence on people of color, there’s a lot of grief there,” she said. “Human beings are designed to grieve in community. We don’t need to carry this alone.”

Dance might not seem like an obvious place to engage in social activism, but according to Sarah Crowell, the artistic director of Destiny Arts Center, it’s fertile ground for instigating action. “There are all of these civil rights movements, and yet where’s the movement in the movement? How do we move something if our bodies aren’t moving?”

The choreography in Seed Language glides between translating spoken words and accentuating them. In the piece “Crabs in a Barrel,” Ericka Huggins (played by Camille Schmitt) describes her experience growing up among various shades of poor people. While her mother told her that being poor made them all the same, she discovered battle lines based on race. As Schmitt speaks Huggins’ words, a cluster of dancers grab, push, and lift each other, embodying the futility of internalized oppression. It’s a literal interpretation, but the effect is visceral and dynamic, giving audiences a sense of what it’s like to be against one another and never get out.

The words “interpretive dance” tend to be followed by derisive eye rolls, but the performances in Seed Language manage to be heavy hitting without being heavy-handed. “People crack jokes about interpretive dance, but literal translation of text or song is age old,” said Crowell. “There’s something about it that adds an accent to what’s being said. It’s like saying, ‘This is important.'”

Other pieces in the show take a less direct approach. In one, Jon Lee vogues while talking about tensions and parallels between Black communities and Asian Pacific Islanders. He doesn’t act out the words, but his frenetic-yet-fluid movements draw you in, forcing you to pay attention.

“When juxtaposed with a monologue that’s based in someone’s lived experience, movement can convey the subtext of that monologue,” said Klaymoon. “What’s inside the body? What are the emotions underneath those words? That’s what I’m really reaching for.”

Often the emotions underneath those words are gut-wrenchingly painful, but Seed Language refuses to leave its audience in sorrow. The finale is a series of seven ecstatic, joyful dances.

Klaymoon believes that in order to fully access joy, we need to fully grieve. If the experience of watching Seed Language is any proof, she’s definitely onto something. After coming through the production’s difficult passages, the exuberant ending feels like a rush of hope.

Crowell echoed this sentiment. “True change, on a personal level and on a social level, only happens when we’re willing to look at the hard truth,” she said. “Dance provides a vehicle for both going into the hard places and absolutely coming out of them.”