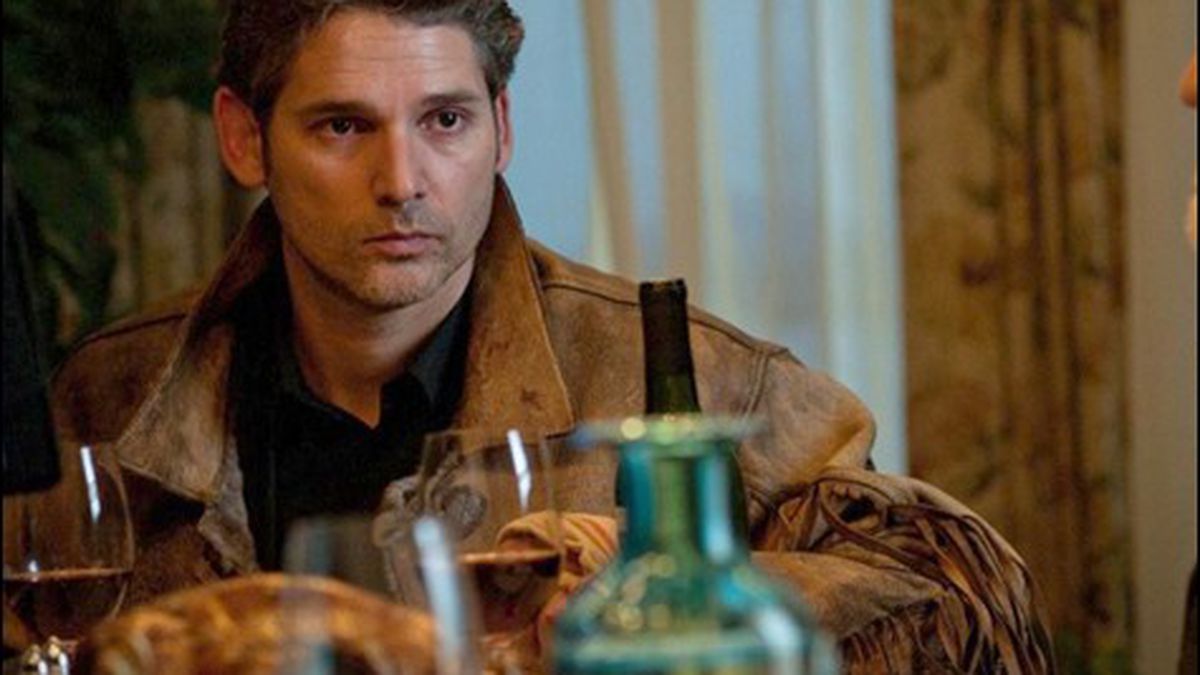 Even the snow is noir.

It’s the essence of film noir: three wrongos on a collision course with no hope of avoiding disaster — a trio of mixed-up, violent people heading for a crackup on a snowy country road somewhere in Michigan. Obviously the most treacherous is Addison, played by Eric Bana with a Southern accent and a permanent blood-leer on his face. As we join the action in Stefan Ruzowitzky’s Deadfall, Addison, in the company of his slutty kid sister Liza (Olivia Wilde) and a disposable accomplice, is in the midst of fleeing the successful knockover of a casino with a satchel of cash. Suddenly things begin to crumble. But then matters had been a little hinky between the brother and sister long before that. They clearly have an unhealthy sibling relationship.

The only thing Addison and Liza need to touch off their own private World War III is a character like Jay (Charlie Hunnam), a short-fused young man who, as it happens, that same day is being released from the Wayne County Correctional Facility in Detroit. First thing Jay does on the outside, after checking in tersely with his mom and dad (Sissy Spacek and Kris Kristofferson), is to pay a visit to his old boxing gym, where Ronnie the fight manager (John Robinson) is none too happy to see him. Jay won a silver medal at the Beijing Olympics in 2008, but evidently there was a slipup later on — something about the boxing commission and a cigar box with money in it that Jay believes is his.

Accidents and inevitabilities take place, and before long Addison, Liza, Jay, and Jay’s parents are seated around the table at the parents’ farm house enjoying a particularly loathsome Thanksgiving dinner. A feast of misgivings. A Turkey Day hostage situation.

Deadfall, the latest in a remarkable procession of solid, often highly imaginative, no-frills genre movies released in 2012, shows director Ruzowitzky — he made the ironic Holocaust/gangster film The Counterfeiters — manipulating a stripped-down film noir scenario so as to wring every last ounce of menace out of it before it evaporates. What Zach Dean’s screenplay lacks, Austrian-based director Ruzowitzky paints in, with bold, elemental strokes on the dirty-snow canvas.

Bana’s Addison hides most of his emotions except the ones having to do with his “little girl” Liza. Stumbling across the frozen farmland — the film was shot in Quebec to stand in for Michigan — trying to reach the Canadian border, he seemingly can’t avoid intruding in family situations, most of them horrid and all of them ruined by his presence. It’s a treat to see the actor, usually typecast as a rugged hero (Munich, Hanna, Troy, Hulk), letting his freak flag fly in a sweaty psychopath role.

Ms. Wilde, daughter of journalist Andrew Cockburn and niece of the late political columnist Alexander Cockburn, faces the greatest acting challenge in the film: to convince us to feel anything but uncomfortable while witnessing Liza, in her skimpy come-fuck-me dress and no coat, suddenly dumped into the frigid rural setting. Liza’s the epitome of untrustworthiness, with the requisite soupcon of pathos. No wonder Jay is instantly captivated.

Hunnam, a rough-and-ready British product cast to advantage in dustups like Cold Mountain, Children of Men, and the TV series Sons of Anarchy, potentially owns the best role in the film, and it’s a pity the filmmakers didn’t make more of it. Unlike hard-scrabble losers Addison and Liza, Jay had the benefit of a stable home life with folks who ostensibly did not regularly beat their children. Compare him further to Hanna Becker (Kate Mara), the deputy forced to put up with a sexist blowhard of a father, the idiotic local sheriff (Treat Williams). When in trouble, Jay’s first and last resort has always been his fists. There must be more to him than that.

Ruzowitzky sketches in a forlorn emotional landscape to match the wintry location: a battered family in a hunting cabin, the denizens of the Stag Saloon, a dreary truck-stop motel, etc. Archetypal settings and stock characters animated by crisp, direct action scenes of beatings and shootings. What a delightfully sour piece of entertainment to find on our holiday doorstep.

How Did the East Bay Do in the Latest Meltdown?

Environmentalists Sue the State Over Spike in Whale Entanglements in Crab...