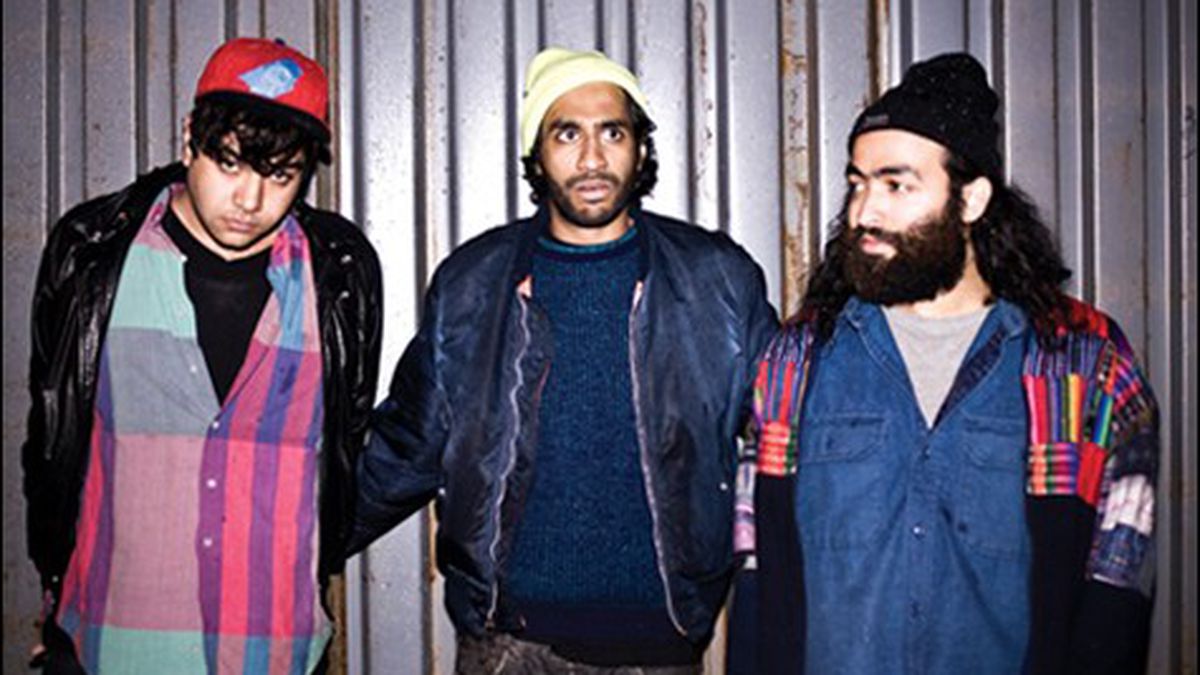 A veritable tome has already been written about hip-hop group Das Racist, and the group isn’t even on a label. And, according to Alameda-born frontman Victor Vazquez, Das Racist doesn’t want one. The Brooklyn-based trio first went viral three years ago with its song “Combination Pizza Hut Taco Bell,” an incantatory fast-food joke rap that garnered comparisons to 20th-century composer Olivier Messiaen, as well as Cheech and Chong. The basic premise was simple: two guys on cell phones, trying to find each other at a dual dining franchise. And yet, reviewers were flummoxed. Was it a critique of American consumerism? A work of existentialism, as Pitchfork suggested? An inane dance track? A joke?

And, with all that’s been written on the group, most writers still aren’t sure how to characterize emcees Himanshu Suri, Vazquez, and Ashok Kondabolu (aka Dap). The emcees are self-consciously ironic in a way that’s probably sincere. They’ve grudgingly accepted the label “joke rap,” yet there’s clear intentionality to everything they say, even when it sounds like gibberish. Their rap lyrics are a concatenation of non sequiturs and random references — to other hip-hop artists, to advertisements, to Gandhi and other political thinkers, to a Complex magazine cover with Kanye West in white face. They also reference Nietzsche, Edward Said, and Spivak, while quoting lyrics from N.O.R.E. They seldom provide context.

Das Racist’s two mix tapes haven’t helped break the spell that much. Nor has its stage performance. Performing for a sold-out crowd at The Independent last Wednesday, the three emcees looked identical to their hipster audience: rumpled jeans, T-shirts, baseball caps. Vasquez’ cap had a sickle printed on the front. He seemed cranky. “Everybody turn around, and get the fuck out of here,” he yelled, before the first note crackled through the stereo speakers. The audience cheered. “It was just a joke,” Vazquez confessed later. “Although, if people went home, that woulda been cool, too.”

Vazquez and Suri met at Wesleyan University, a fact that writers often belabor. They are, indeed, dyed-in-the-wool liberal arts majors. Vazquez studied English, while Suri pursued degrees in economics and South Asian studies. Hype man Kondabolu knew Suri from Stuyvesant High School in New York. He also occasionally performs alongside his brother Hari Kondabolu, a well-known stand-up comedian. They treat hip-hop as both an art and a way to convey political messages. Their song “You Oughta Know” is largely about frustrations from “arguing with white dudes on the Internet.”

“As a white dude, all I can say is Das Racist is dope, bitch,” wrote one commenter on YouTube.

For all its provocations, Das Racist might be the most brilliant hip-hop group in operation right now. With a discography that includes two free downloadable mix tapes, the group has nonetheless garnered more press attention than most rappers get in a lifetime — even ones signed to Def Jam. The emcees have collaborated with everyone from electro producer Diplo to jazz pianist Vijay Iyer. They’re avid social networkers, which accounts for a lot of their best connections, Suri said. The Iyer collaboration — which was kind of a coup for an indie group with no label — started with a friendly dialogue on Twitter. “I just joked around with him a bunch,” Suri said. “We just kinda realized that we have a similar sense of humor.”

Perhaps the most bedeviling aspect to Das Racist is that the emcees steer their own public image so well. They’ve called themselves “the smartest dumb guys in the room,” but they’re actually the smartest. And they’re canny around journalists. They sassed New York Times reporter Deborah Solomon in a December interview, and took New Yorker journalist Sasha Frere-Jones to task, after Frere-Jones proclaimed hip-hop “dead” in 2009. Vazquez wrote a rebuttal to Jones’ “death of hip-hop” article for Flavorpill magazine, in which he accused Jones of using “the age old ‘Now, I don’t mean to be racist but [insert something racist here] Kool-Aid.'” Jones later credited him and Suri for advancing the conversation. The whole incident boiled down to a single lyric in “Rappin’ 2 U,” in which Vazquez talks about being featured in “your favorite Condé Nast publication.” He continues: They ask me all about my view on relations of races/and cut out all the radical shit for space/That’s racist.

And yet, when you see Das Racist perform live, you wonder whether these guys are for real. Or if they’re purposefully trying to alienate their audience. Or if the ability to clown an audience is part of their appeal. “It’s one of the little tricks we have up our sleeve,” Vazquez said, admitting that yes, the group does traffic in reverse psychology.

At any rate, the audience at The Independent ate it up. “We suck! We suck!” Suri yelled when the band took the stage, over a snake charmer instrumental. Then Suri and Vazquez launched into a borderline-incomprehensible opening monologue — something about a store in San Francisco, and about a redhead who worked at the store. Did we know the redhead? “Well, fuck her.”

Next, they plunged into a 25-minute set that included the songs “Irresponsible,” “Rapping 2 U,” and “You Oughta Know.” They also danced to Tina Turner‘s “Simply the Best,” led the crowd in a sing-along to Usher‘s “You Make Me Wanna,” and promised to regale the crowd with the five elements of hip-hop — a nod to the old chestnut that hip-hop isn’t just a music genre, but a set of disciplines: emceeing, B-Boying, DJing, graffiti, and “knowledge.” Or, if you believe the dogma of Das Racist: “Kate Bush, Kate Bush, Kate Bush, Kate Bush, and —” (the last one was indecipherable). The joke was a perfect summation of the emcees’ entire sensibility. They’ve clearly studied the history and formal elements of their medium. They know it well enough to make fun of it. And they’re not afraid to call out its clichés.

Das Racist closed out the set with a fake encore that turned out to be a real encore. In all, it was less a hip-hop show than a piece of performance art. Or was it? Judging from their set at The Independent, the members of Das Racist don’t take their stage show that seriously. They treated it like a giant house party, keeping cache of alcohol on hand and periodically demanding more. When the lights went up, it really did feel like the party was over.