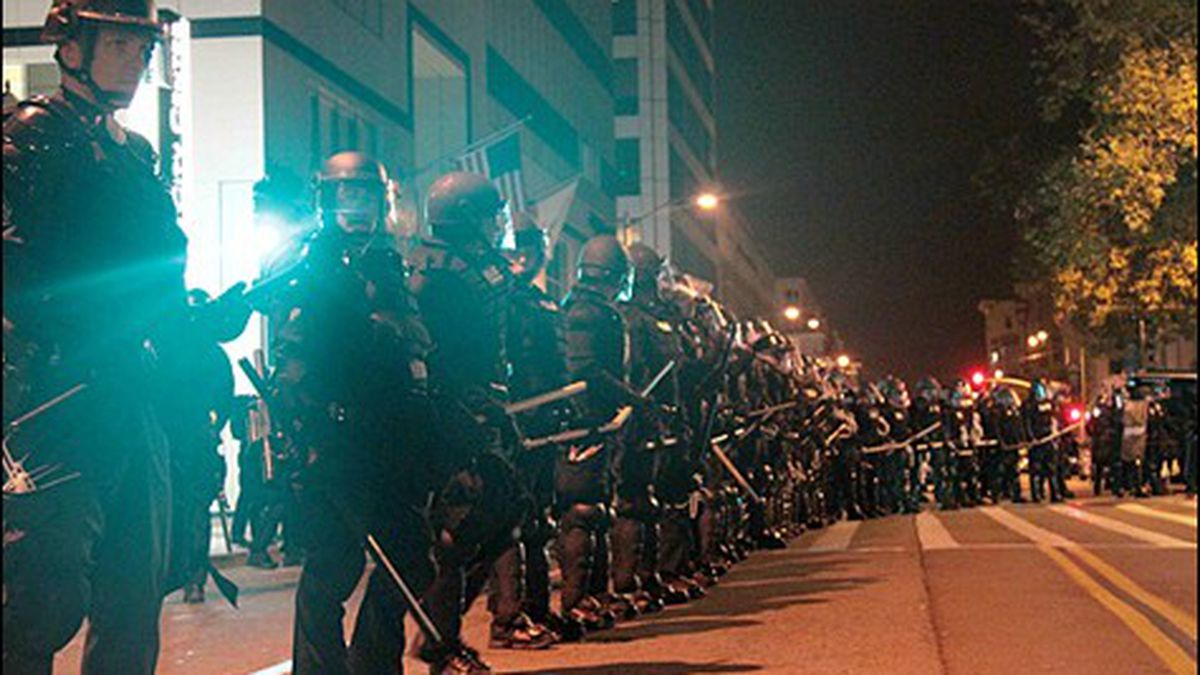 Despite the city's claims of reform, the Frazier Report details the Oakland police department's culture of impunity and failure to change.

At a press conference held on the top floor of the Oakland Police Department’s headquarters last Thursday, members of the media were given copies of the long-anticipated Frazier Report, an independent study commissioned by the city to investigate the organizational roots of OPD’s misconduct during the Occupy Oakland protests of October 25, 2011. Clipped to the front of the report was a city press release claiming that most of the recommended reforms by the consulting firm the Frazier Group LLC have already been completed or are underway. A table summarizing the report’s 68 recommendations with check marks noting specific areas of progress was also attached. An oversize pie chart claiming that 74 percent of the report’s recommendations have been “completed” or are “underway” stood on an easel near the podium. The message city leaders intended to convey was clear.

However, there’s no way to independently verify whether specific recommendations in the report have in fact been completed or are in progress. “That was a city chart,” said the report’s lead author, Thomas Frazier, in response to an email about the city’s press packet. “I had not seen it before [Thursday]. We have no way of knowing how accurate it is.”

And, moreover, the Frazier Report gives a detailed and somewhat devastating list of criticisms focusing on OPD’s system for investigating officer misconduct and crime. Not only does the department not learn from past mistakes, the reports states, but Oakland police officers even acknowledge that the lack of consequences for violating policy or engaging in criminal misconduct has fostered a culture of impunity. Thus, the report raises serious questions whether the recommended reforms can so easily be completed.

The Frazier Group’s findings identify systematic deficiencies that largely reflect OPD’s failure since 2004 to implement the court-ordered reforms demanded by US District Judge Thelton Henderson. The report gives a detailed accounting of organizational dysfunction, inadequate planning and investigations, and a lack of accountability in relation to last fall’s Occupy Oakland protests. These shortcomings also manifest themselves in the department’s quotidian work of investigating and solving crimes, evidenced by a low clearance rate (only 32 of the 110 murders that took place in Oakland in 2011 — or 29 percent — were solved and prosecuted) and deep mistrust of police among large segments of the community.

OPD’s shortcomings are indicative, the report states, that the department does not learn from past mistakes in spite of expensive lawsuits and settlements. The use of less-than-lethal munitions on demonstrators last October, tactics that Frazier characterized as “dangerous and outmoded,” is in direct violation of a crowd-control policy implemented in 2004 after the city paid $2 million to protesters wounded by projectiles fired on a crowd of antiwar demonstrators at the Port of Oakland.

“Everything they learned in 2003 has been unlearned,” said attorney Jim Chanin, who initiated the class-action lawsuit that underpins federal monitoring of OPD. “The problems repeat themselves because there’s no accountability, no reason to do any differently, because no one gets disciplined for doing the same actions over and over.”

Buried deep within the Frazier Report is a direct acknowledgment by Oakland officers that the lack of consequences for violating policy, or even engaging in criminal misconduct, has fostered a culture of impunity, despite nine years of court-mandated reforms intended to eradicate such behavior. Unidentified OPD officers told Frazier Group personnel that this situation was due to the lack of corrective action by those in charge: “Members of the department observe tacit approval of misconduct by supervisors and commanders, so the behavior continues.”

The lack of consequences for officer misconduct manifests itself in OPD’s lax disciplinary record outside of recent Occupy protests — particularly with officer-involved shootings. Lack of accountability and unwillingness to pursue improper conduct by officers are identified repeatedly in the Frazier Group’s examination of OPD deployment of Tango Teams on October 25. These officers are typically assigned to gang enforcement or SWAT units, and have been involved in a disproportionate number of shooting incidents and uses of force in non-protest incidents. They have carried on similarly during crowd-control operations.

Police video shows that Tango officers first threw tear gas into the crowd on 14th Street and Broadway, which OPD and Frazier claim were in response to objects being hurled at them from the crowd. Regardless of the cause, the Frazier Report found that Tango officers violated OPD policy by not inventorying or keeping records of their usage of less-than-lethal and chemical munitions.

OPD has also not submitted each individual use of force by Tango officers for scrutiny by a Use of Force Review Board, despite Police Chief Howard Jordan’s assertions last fall that the incident would be investigated as a “Level 1 Use of Force” (a potentially lethal incident). As of April, a review board had not scrutinized any of the incidents involving less-than-lethal ammunition. The Frazier Report also criticized OPD for an “unacceptable number” of inadequate after-action use-of-force reports from October 25.

The incidents pending review also include the injuries sustained by Marine veteran Scott Olsen, who was severely injured after being struck in the head by a drag-stabilized beanbag round. In regards to Olsen’s injury, OPD officers testified to Frazier personnel that they did not notice him fall to the ground injured, despite Officer Robert Roche’s decision to lob a gas grenade at Olsen and a group of people coming to his aid.

The Frazier Report directly challenges the testimony of Tango officers in regards to the Olsen incident: “After review of hours of video footage involving the injured party (who appears to be approximately 15-25 feet in front of the police skirmish line when he was struck and fell to the ground), the fact that no law enforcement officer, supervisor, or commander observed the person falling down or prostrate in the street during the confrontation was unsettling and not believable.”

Despite the damning report, city officials say proof of change can be seen in policy changes, as well as the smoother police-protester interactions that occurred on May Day. “Policy by its very nature is a document, so you can see if it is changed,” said city spokeswoman Karen Boyd. “A tactic you can view in a crowd-control situation, and see if it has been changed.”

But many lawyers and community activists who have worked for more than a decade to change OPD say these claims of reform are inadequate. They point to the numerous unfulfilled reforms required by court-appointed monitors stemming back to 2004, many of which are simply revisited in the Frazier Report as if they were new problems.

“Oakland does not have a great history of implementing reforms, considering that it has been nine years since the current crowd-control policy came out of a court settlement, and it’s not being properly followed,” observed Alan Schlosser, the legal director of the ACLU’s Northern California chapter. “We are skeptical that OPD is meaningfully implementing these recommended reforms.”

A representative from the Frazier Group was not at the press conference to confirm whether the consulting firm worked with OPD and City Administrator Deanna Santana to address some of the myriad problems cataloged in the report, let alone to say whether any progress was made. “As a corporate policy, we don’t comment on our reports once they are released to our client,” explained Frazier.

Mayor Jean Quan and Santana also took the occasion of the report’s release to announce several big “strategic investments” they say will propel structural changes in OPD. One proposal is to “civilianize” the Office of Inspector General by moving it out of OPD and into the city administrator’s office.

While this idea does not appear in the Frazier Report, according to Boyd, shifting the Office of Inspector General to Santana’s office is being proposed as a means of addressing the numerous problems with OPD’s internal investigations of officer misconduct that are cataloged in the Frazier Report. “There were issues with the investigation process, whether it was objective enough,” said Boyd. “A number of findings in the Frazier Report discuss the objectivity and process of the investigations, so having OIG civilianized and moved to the city administrator’s office, rather than keeping it in the police department, adds a layer of objectivity.” The independent monitor for OPD’s federal consent decree also recommended the shift.

Santana was one of the key decision-makers who ordered the raid of the Occupy Oakland camp and approved of police operations on October 25 — a decision that should have been delayed until a better action plan and training had been implemented, according to the Frazier Report. Furthermore, Santana is Chief Jordan’s boss, and the police department already falls under her oversight, facts that call into question whether the shift would improve investigations into officer misconduct and crime.

“I don’t think it makes sense to have the inspector general reporting to a city administrator who’s been so enthusiastic about everything the police do,” said Dan Siegel, an attorney and former advisor to Mayor Quan who resigned last fall.

As the Express reported last week, an OPD officer from the Criminal Investigations Division is currently under investigation for allegedly compromising the Scott Olsen case in an unspecified manner.

The OPD’s inability to conduct “assertive, thorough, objective and appropriate” criminal or administrative probes into officer misconduct “potentially serve as indicators of departmental ethics and values,” states the Frazier Report. The report also strongly suggests that OPD officers engaged in “group reporting,” or collaboration, following the evening of October 25 to coordinate their statements regarding uses of force and injuries to demonstrators.

OPD officers interviewed by Frazier Group personnel also spoke of long-standing problems with misconduct investigations: “There is a long time culture of not challenging subject and witness officers,” reads one section of the report. “IAD investigators do not want to be the individual who sustains a complaint against a particular member” of OPD.

One senior OPD officer told the Frazier Group’s investigators that he had virtually no faith in the department’s ability to police itself and punish officers guilty of crime or misconduct: “I have little faith that [Internal Affairs] can get it right and have even less faith that Criminal Investigation Division will do the case right. The CID investigation would be a waste of time. I do not have faith in the IA or CID process.”

Chanin believes the lack of documentation of Tango Team’s less-than-lethal arsenal, and the doubts raised by the Frazier Report over the veracity of OPD testimony to CID investigators, warrant the scrutiny of outside law enforcement. “The fact that a criminal investigation hasn’t resulted in anything indicates the FBI or the Attorney General needs to step in,” Chanin said.

Editor’s Note: The original version of this story contained an error regarding the year in which the current OPD crowd-control policy was implemented. The correct year was 2004, not 2003. This version has been updated to reflect the correction.