The Selby Slag Site near Rodeo has been leaching heavy metals into the Bay for a century, and though it may never be cleaned up, it could be fully contained within five years. 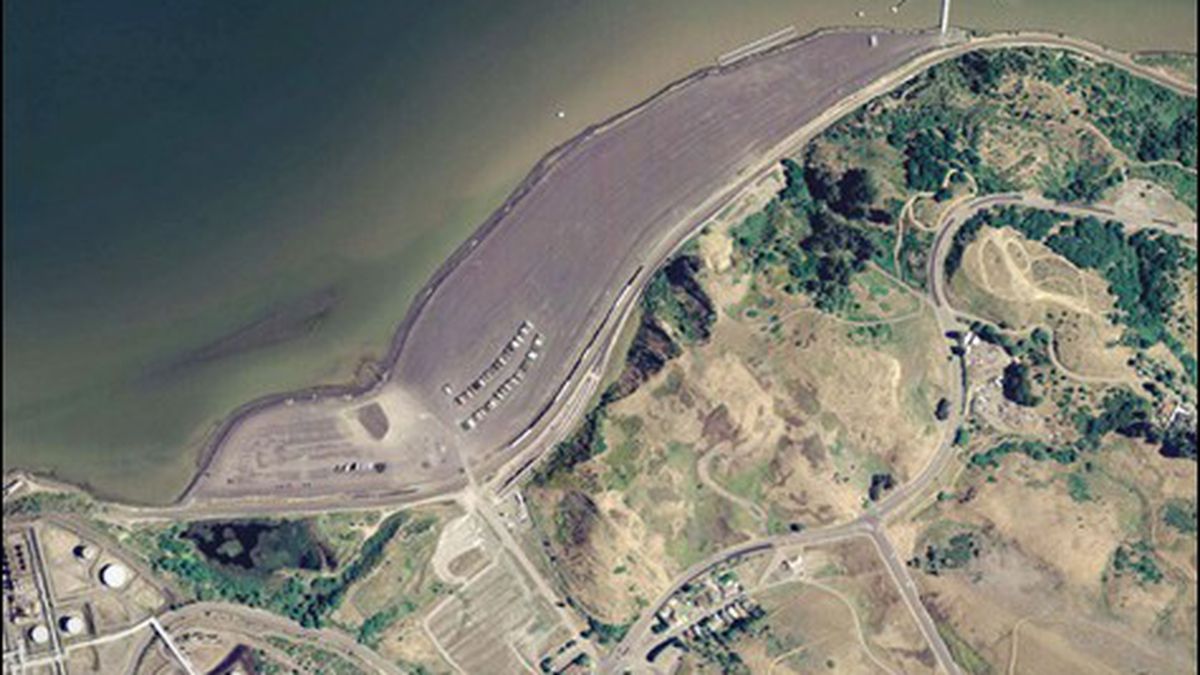 For a full century, between 1872 and 1972, a metal smelting and refining plant operated on the East Bay shore just north of Rodeo. Suffice to say it’s the sort of thing that wouldn’t fly nowadays. The plant released huge quantities of chemicals and metals into the environment and adjacent San Pablo Bay, and today, decades after it was shut down and removed, its toxic legacy on the land continues. An attempt in the early 1990s to contain the toxic heap, known as the Selby Slag Site, was only partially effective, and plans are underway to end its perennial polluting for good.

Smelting is the process of extracting metals — in this case, mostly lead, gold, silver, and copper — from ore through the application of heat and a chemical agent like carbon monoxide. The byproduct is a material called slag, a mixture of undesirable metal compounds that, after cooling, takes on a cement-like consistency. Over the course of one hundred years, the smelting plant churned out a lot of slag: An astonishing 2.3 million cubic yards of it remains onsite, still resting where it was originally dumped along the shoreline and directly into the bay.

Today, the property — designated a State Superfund site — isn’t much to look at. As part of a series of interim measures performed in 1990 and 1991, the 66-acre property in view of the Carquinez Bridge was graded and capped with asphalt, giving it the appearance of an expansive parking lot extending like a shelf from the natural contours of the shoreline. But beneath this fairly innocuous facade lies a foundation of slag, laced with heavy metals, up to forty feet deep. Beyond the asphalt cap, slag deposits extend another two hundred feet into the bay, entirely uncontained.

Heavy metals, so named because of their relatively high densities and their toxicity in low concentrations, can be extremely harmful to humans as well as to aquatic life. They can disrupt ecosystems and bioaccumulate in food chains. Antimony, used in flame retardants and batteries, is a suspected carcinogen that produces effects similar to lead poisoning. In heavy doses, it can cause death in humans. Cadmium has a range of effects on living organisms, and has been shown to cause cancer in both humans and animals. Arsenic is among the most poisonous compounds on the planet.

Cleanup of the Selby Slag Site has been a long time coming. For nearly thirty years, scientists, various property owners, and state agencies have known that the slag leaches toxic heavy metals directly into bay waters and sediments on a continuous basis. The asphalt cap installed in 1991 reduced the amount of surface runoff from the slag piles into the bay. However, subsequent testing revealed that lead, zinc, copper, arsenic, antimony, cadmium, and nickel were still seeping from the slag through groundwater flow on one end and twice-daily tidal infusions on the other.

Today, the California Department of Toxic Substances Control is leading an effort to seal up the slag pile for good — and, hopefully, end any further leaching of harmful heavy metals into the environment. “We’re excited about getting the site cleaned up,” said Robert Batha of the Bay Conservation and Development Commission, which will need to sign off on the upcoming remediation work. “It’s been a mess for many, many years.”

A feasibility study was completed earlier this month outlining six potential approaches; all would reduce pollution levels at the site to values acceptable under the 2000 California Toxics Rule. Two options involve excavating the slag, but according to Mark Piros, unit chief for the Department of Toxic Substances Control, they’ve already been ruled out. Disposal would cost more than $1.7 billion.

The remaining four approaches entail constructing physical and hydraulic barriers around the slag to prevent metals from escaping into the environment, at a cost of between $94 million and $139 million. According to Department of Toxic Substances Control spokeswoman Charlotte Fadipe, a remedial action plan presenting the preferred alternative will be available by next summer, along with an environmental impact report assessing for the first time potential harm from the site on neighboring wetlands and aquatic habitats.

Next, permits will have to be obtained from agencies including the Army Corps of Engineers, the California Water Quality Regional Control Board, and the Bay Conservation and Development Commission. Given the toxicity of the site and its location on (and in some cases beneath) the bay, permitting is likely to be a difficult process. At this stage, there’s no telling how long it’ll be before the actual work begins, which itself will take another three years. In the meantime, heavy metals from the slag deposit will continue their march into the bay.

“Some of these cleanups can take a very, very long time, just by their nature,” Fadipe said. This project poses a particular challenge due to its size and the volume of toxic materials present. “The Selby Slag Site is one on the largest sites in the Bay Area in terms of the anticipated scope and estimated cost of the cleanup,” she said.

But that still doesn’t explain the three-decade remediation process, which began in the 1980s. Piros said he wasn’t sure why the actions taken in 1990 and 1991 weren’t designed to tackle the problem once and for all, instead of leaving the perimeter of the pile open to the environment for another quarter-century. “Compared to some of our other projects, this has definitely been a longer time frame,” he said.

Containment of the slag will be funded in roughly equal measure by three parties: former smelting plant operator ASARCO, which went bankrupt in 2005 but was required to set aside $39 million for remediation; current landowner CS Lands, a subsidiary of oil company Phillips 66; and the California Lands Commission.

The involvement of the commission, a steward of public lands, is an interesting footnote to the site’s history. In the late 1940s, the commission entered into a lease with ASARCO that allowed it to continue dumping slag into the bay. Project manager Dave Plummer, who has followed the slow progress of the smelting site cleanup since 2000, explained that at the time, filling the bay for development was viewed as a desirable practice: “Every low-lying area became a landfill of some sort.” Even the State Lands Commission, ostensibly charged with protecting natural resources, supported the destruction of the bay.

Some seventy years later, it’s legally bound to help clean up the mess. No matter which remediation plan is selected, however, the slag and its toxic metals will remain. Phillips 66 doesn’t yet have plans for the site, spokeswoman Janet Grothe said, but it’s unlikely that the risk of contamination will ever disappear.