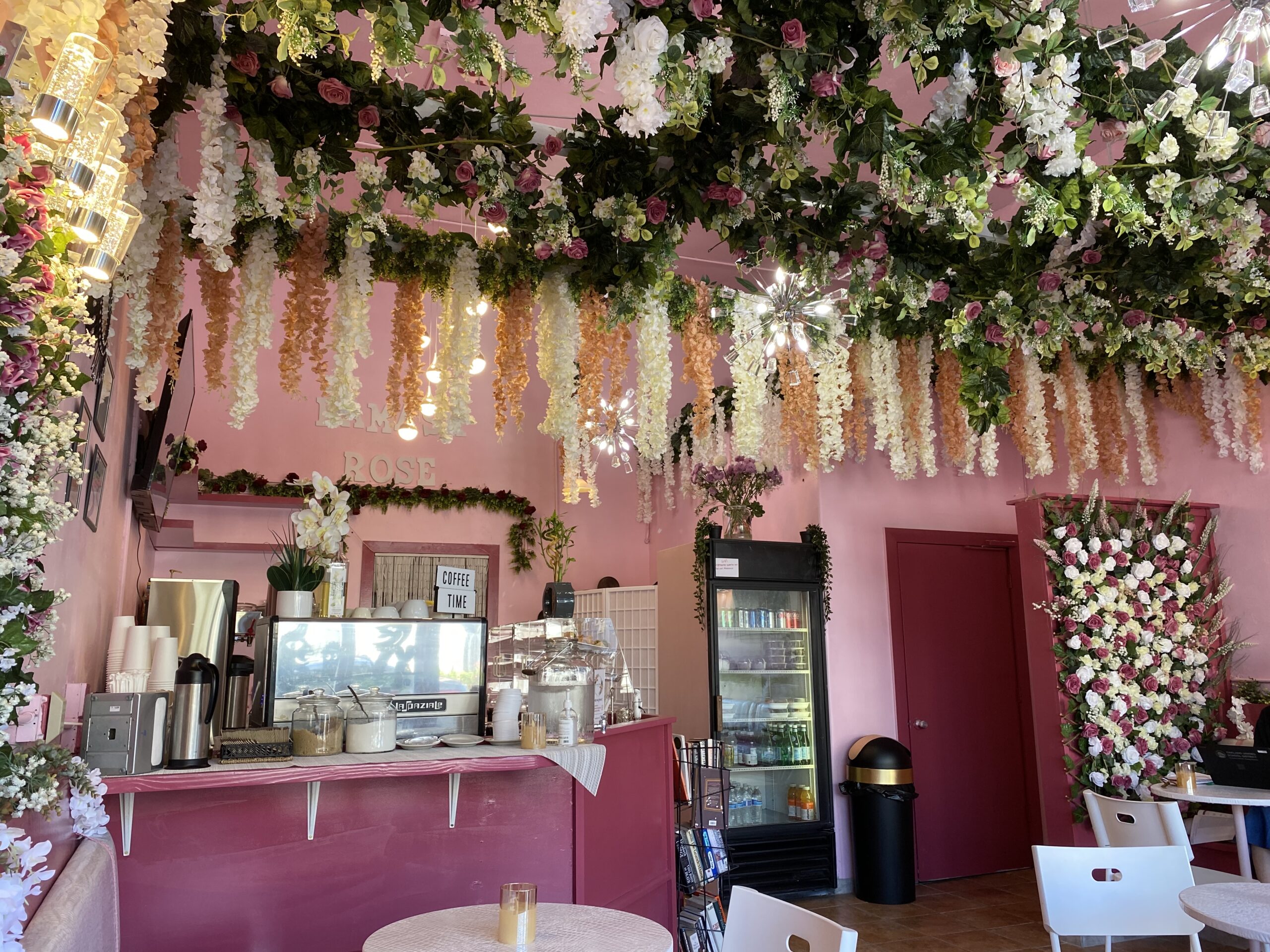 Two years ago in March, the week before restaurants shuttered for the pandemic, I drove down to San Jose to try the desserts at K Cafe Patisserie & Tea House. The interior design is a combination of gaudiness and glitz. Where one crystal chandelier might suffice at another establishment, K Cafe adds in a dozen more. Garlands of flowers—and I mean garlands upon garlands—were hanging down from the ceiling. One Yelp reviewer at the time commented, “Can you say INNNNNSSTTAAAAGRRAAAAAAM?”

When Damask Rose Coffee opened in April, the initial online chatter led with similar headlines. The cafe’s interior walls are painted the color of pink roses with a contrasting pomegranate trim. White and pink flowers adorn one entire wall and, like K Cafe, vine their way across the ceiling. The IG photos capture that vibrancy and the feeling that you’re in a cozy hothouse. Though once you’ve ordered a coffee or sat down to eat a piece of pistachio bird nest baklava, the décor feels lush rather than intrusive.

After closing their family catering company Old Damascus Fare during the pandemic, Batool Rawoas said that her parents, Rawaa Kasedah and Mohammad Aref Rawas, now own Damask Rose Coffee but that she is in charge of the day to day operations. Her father has also started a wholesale business in Oakland called Levant Farms. Rawoas graduated from the training program at the 1951 Coffee Company in Berkeley, a “non-profit specialty coffee organization that promotes the well-being of the refugee community in the United States by providing job training and employment to refugees, asylees and special immigrant visa holders.” With her newly acquired knowledge and passion for coffee, opening a cafe made sense as a next step.

Rawoas said that the ballyhooed décor was her father’s idea and a family project. “He has been the main supporter of this business. He was the one who actually worked with someone and painted the space, along with my mom.” The décor sprang from a dinner conversation about what to name the cafe. “We wanted a name that sounds nice but also reflects our Syrian background,” she explained. “We really wanted to go all out with the rose concept.” They’re planning to expand on more rosy ideas when they add more items to the menu.

During this opening phase of the business, two popular items are a rose lemonade and a rose latte. Rose water and orange blossom water are very common and popular in the Middle East. Rawoas explained that half of the desserts there are made with both ingredients. “We try to use just the right amount [of rose flavor] so it doesn’t overpower the drink,” Rawoas said. “We want people to actually taste and enjoy the coffee, not just give them a couple of syrups or flavors.” In describing a rose latte, she said that the floral taste and smell is there, “but the coffee is still as powerful as it’s supposed to be.”

I tried a flatbread, hot out of a toaster oven, covered in cheese and spices. And I did glimpse to-go containers of dolmas and hummus in a refrigerator near the register. “Our space is mainly structured to be a coffee shop, not a restaurant,” Rawoas said, and her focus for the time-being is to serve high-quality coffee. Plus several kinds of pistachio-centric desserts, like baklava and warbat.

The differences between these traditional Middle Eastern desserts “are not major,” she said. The warbat is triangle-shaped. The bird nest has a crispier dough than the rectangles of baklava. “The outside could be different, or the amount of pistachio, but each one has its own unique flavor.”