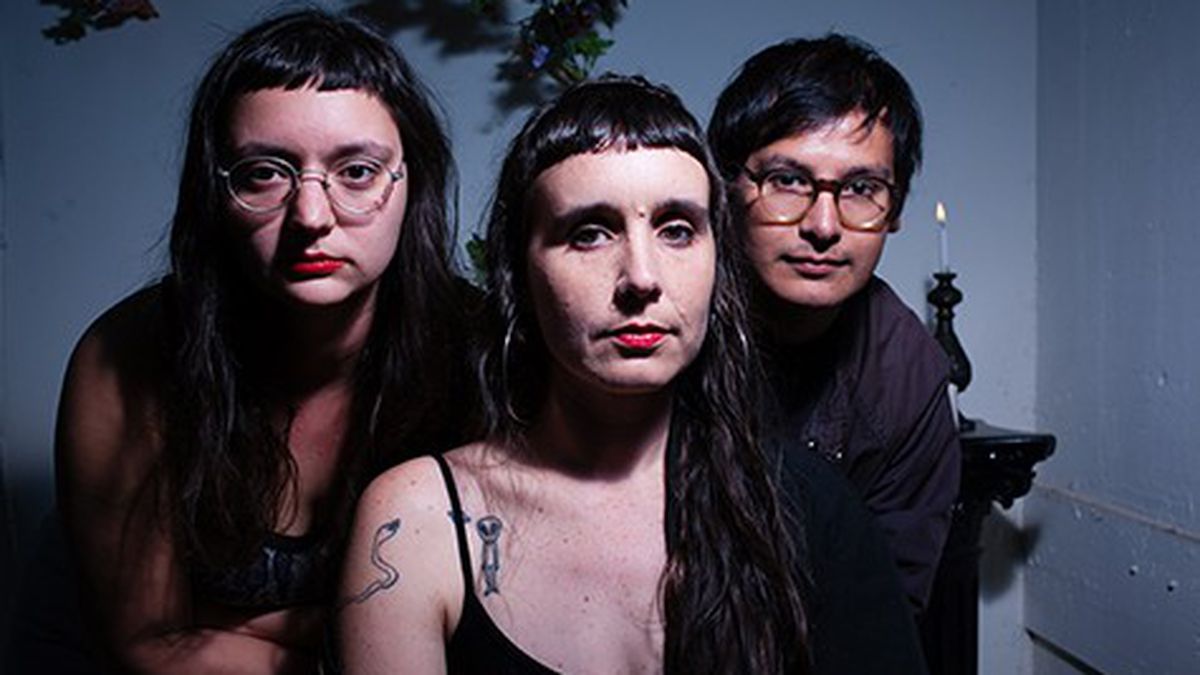 Daisy World Revels in the Ephemeral

The Oakland doom three-piece discusses its new EP and writing songs for a tight-knit community of listeners rather than the masses.

Tracking down experimental rock outfit Daisy World’s entire discography would require the investigative skills of an anthropologist. The Oakland three-piece has a decidedly handmade approach to its work, and has released its previous material on cassettes in limited runs that have often numbered in the dozens.

In a recent interview, the band members — bassist-vocalist Monica Raden, guitarist-vocalist Adrian Saenz, and drummer Jaime Clark — said that they’ve sold some of their past releases exclusively at shows, and they admitted that they haven’t been too diligent about keeping copies of their tapes for themselves. Furthermore, they don’t thoroughly archive their material online: Daisy World’s SoundCloud page contains a smattering of tracks from previous tapes, with gritty, Xeroxed cover art — rather than discernible EP titles — delineating which songs belong to which cassette.

But that’s part of the band’s appeal: Daisy World makes music for a small, tight-knit community of listeners rather than the masses, and its work is better consumed live than on the internet. Despite having played at some notable, local institutions — including Yerba Buena Center for the Arts, where the band performed at the October 2014 opening of the museum’s riot grrrl-themed exhibit, Alien She — Daisy World mostly performs at small clubs and unofficial venues. (For instance, I first saw the band live at an abandoned West Oakland church last November.) The trio tends to avoid dealing in the currency of likes and follows. Instead, the band members opt for intimate interactions with their fans, many of whom are peers in the local punk community.

Currently, Daisy World is getting ready to release what could be referred to as its first relatively large-scale project: A self-titled, seven-inch record that comes out March 3 through the Oakland punk label Turbulent Records in a run of five hundred, though Clark, Raden, and Saenz agreed that they don’t plan to cap the number of copies if it sells out.

The new EP, which will be available on vinyl at shows and, eventually, for streaming on SoundCloud, features three brooding, tempestuous tracks with howling guitars and an aggressive, pounding rhythm section. It savvily combines the dark, atmospheric qualities of doom metal with abrasive, staccato punk elements. Throughout the EP, the members of Daisy World cultivate an atmosphere of foreboding through dense, droning instrumentation and feedback that functions as an instrument in its own right. Clark’s sturdy drumming provides a solid foundation for Saenz’ distorted, ominous guitar riffs, and he frequently dissolves the tracks’ melodies into atonal combinations of gravelly, textured chords. Saenz and Raden offset the compositions’ ambient qualities with call-and-response vocals that often sound intentionally unpolished and throaty.

I met up with the members of Daisy World at Clark’s apartment in West Oakland on a recent Tuesday night. Clutching mugs of tea and sporting messy hair and worn-in, vintage garb, the trio looked at home in Clark’s cozy, eclectic space, where seemingly every corner was dedicated to a different creative pursuit. A collection of records and cassettes containing a smattering of pop classics and local punk releases filled one corner. A sewing machine and colorful, repurposed fabrics occupied a workspace on the other side of the room; photocopied punk show fliers decorated the fridge. The three musicians are also practicing visual artists (Clark and Saenz are both photographers, and Raden does set design, sculpture, and video), and Clark’s artfully mismatched digs evoked the trio’s adamantly DIY approach to its work, individually and as a collective.

I asked the band about why it chooses to release its work in ephemeral, limited-edition formats, since that approach often limits the scope of its potential audience. “I think what appeals to me is that we can have a really personal relationship with our releases,” said Raden. “We can put them out ourselves and sort of be involved and in control of every aspect, and choose to work with friends we know and trust and have a mutual support system with.”

“With past projects, I’ve had really bad experiences working with people I don’t know who have way more control over the outcome,” added Clark.

As the bandmates’ conversation oscillated between joking around and talking business, one could sense their closeness both as friends and collaborators. Saenz and Raden, who first met as graduate students at California College of the Arts, initially started Daisy World as a duo and played their first show in 2012. At first, the two of them programmed beats on a drum machine, but Clark volunteered to drum for them after seeing them perform.

“I was like, ‘You guys don’t need a drummer. But if you wanted a drummer, I would try,'” she recalled. “I jammed with them a couple times, but I didn’t know if they liked it or not. And then after three or four times, I remember going, ‘So, am I in this band now, or what do you guys think?'”

Soon enough, Clark became a permanent member of the group. The trio agreed that having a live drummer has made their music more dynamic, though Clark added that she often channels the repetitive qualities of a drum machine in her approach to percussion. “I’m not a super precise drummer, but I try to be really forward so that Monica and Adrian can flop around a little bit,” she said, alluding to the improvisatory qualities of Daisy World’s sound.

The three bandmates agreed that their creative relationship is nearly seamless, explaining that nearly every decision they make for the band is the result of a unanimous vote. While this revelation might be hard to believe for those familiar with the exhausting nature of group work, tellingly, throughout our interview, Saenz, Raden, and Clark often began to answer in unison before bursting into laughter.

“I think all of our aesthetics are pretty locked in,” said Saenz, referring to the band’s smooth songwriting process.

Clark offered up a metaphor for each person’s role in the group: “It’s like a cool little Venn diagram, and in the center is Daisy World.”