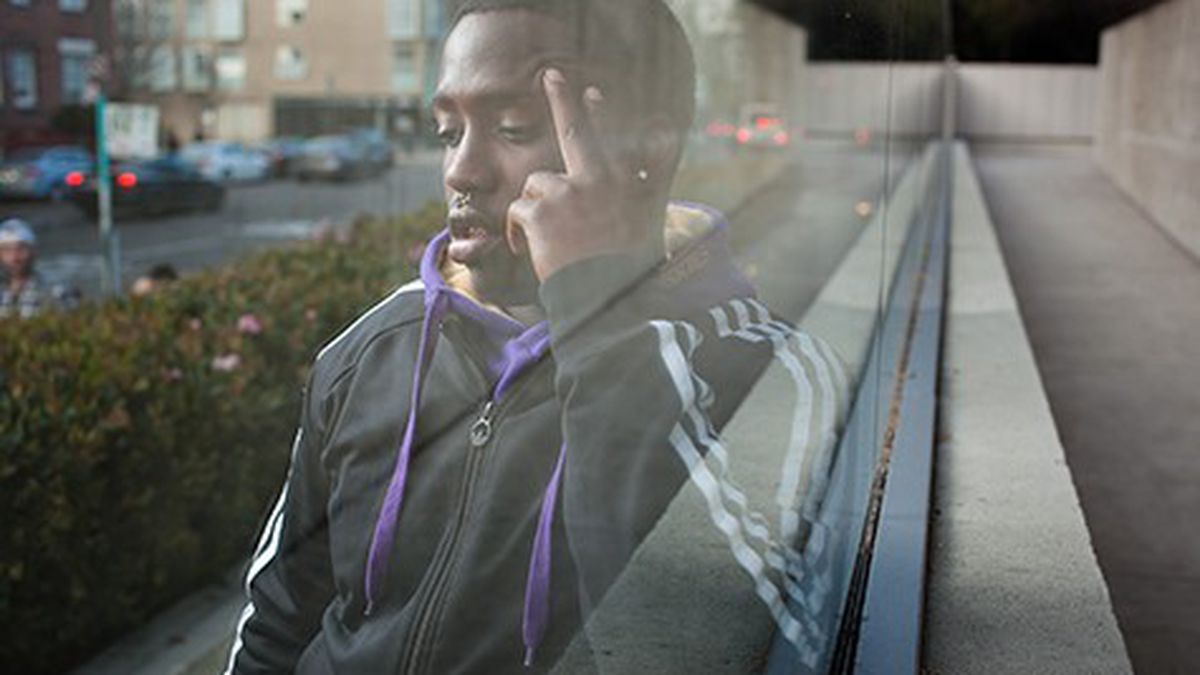 Emerging rapper and former 100s collaborator Allblack opens up about how music helped him escape his troubled past.

The Bay Area is home to some of rap’s all-time greatest acts, including the raunchy Too $hort, iconoclastic Mac Dre, and slick-talking E-40. Allblack (D’Andre Sams) seeks to continue the legacy of these hyphy pioneers with his latest mixtape, NOSHAME, which the 23-year-old East Oakland native self-released in 2015.

Throughout the project, Allblack deploys fast-paced flows over hard-edged beats rife with buoyant synth riffs that evoke a sense of nostalgia for hyphy’s early days. On the surface, NOSHAME is a collection of catchy, party-oriented tracks, but the rapper also uses the mixtape to parse through the struggles of his turbulent early life.

Allblack began his music career as a hype man for the Berkeley R&B singer Kossisko, who, at the time, was rapping under the stage name 100s. 100s’ 2012 mixtape, Ice Cold Perm, positioned him as a rising Bay Area rap star, and he and Allblack opened for notable hip-hop acts, such as A$AP Mob and Cutthroat Boyz. While Allblack grew up looking up to local Nineties rappers such as Richie Rich and Dru Down, it wasn’t until 100s brought him on tour that he developed the confidence to begin making music himself.

“Growing up in Oakland, everyone claims to be a rapper at some point in their life,” he laughed. “I always loved music and felt like I had a story to tell, but I never saw myself as a rapper.” After Kossisko encouraged him, however, Allblack began to use music as an outlet for processing his troubled past.

The artist confessed that he grew up surrounded by family members with substance abuse issues, and he began selling drugs at a young age to make ends meet. As a result, he frequently had run-ins with the law in his late teens and early twenties. “I had uncles and aunts that used, and I also had uncles and aunts that distributed. I chose to go with the latter because I saw the lifestyle that came with it: Money, cars, clothes, and women.”

Furthermore, Allblack grew up on 22nd Avenue and Foothill, around the corner from International Boulevard — a notorious hub for prostitution. “I started pimping at a real young age,” he admitted. “I was doing it for almost seven years before I caught my first case.”

The rapper said that after two brief stints in jail, he was desperate for a positive outlet. That was when he decided to take the advice Kossisko gave him a few years earlier.

“Koss always told me I could stand on my own as an artist, but I was too busy doing other things,” he said. “After sitting down in some of the worst county jails America has to offer, I started thinking, ‘I have to do something else before I end up dead or in the penitentiary for life.'”

After his release from jail, he devoted himself to his rap career. He linked up with longtime friend and fellow rapper Dick Boston and worked with other local artists such as Youngin Geechi and Dizzle.

Allblack explained that though he sought to emulate hyphy’s freewheeling energy on NOSHAME, he also wanted to use his lyrics to delve into deeper subject matter. Throughout the project, his quick-witted rhymes can make listeners feel as if they’re sprinting to keep up. The track “Motif,” for instance, pays homage to Allblack’s many nights in the well-known San Jose night club of the same name. But the tape also features songs that address his drug dealing past: On “Speed Racer,” Allblack talks about the risks he took crossing state lines to make sales. While his music reflects the struggles of growing up in one of Oakland’s most dangerous neighborhoods, with its uptempo, bass-heavy beats and danceable feel, it also speaks to themes of survival and resilience.

Allblack’s freshman project has garnered attention from rap influencers in other cities, including the Atlanta DJ Trap-A-Holics, who frequently hosts mixtapes by big-name artists such as Gucci Mane and Lil Boosie. Trap-A-Holics will release Allblack’s sophomore effort, NOSHAME 2, on March 20. The positive response to his debut mixtape encouraged him to invest in better studio equipment, beats, and — most importantly — his creative process.

“With my first tape I rushed it. I was so happy to be finally making music,” he said. “This go-around, I took my time, held onto songs longer, redid verses, and was critical of the beats I chose. I also opened up more, and I think people who can relate — and those that can’t — will appreciate my truth.”