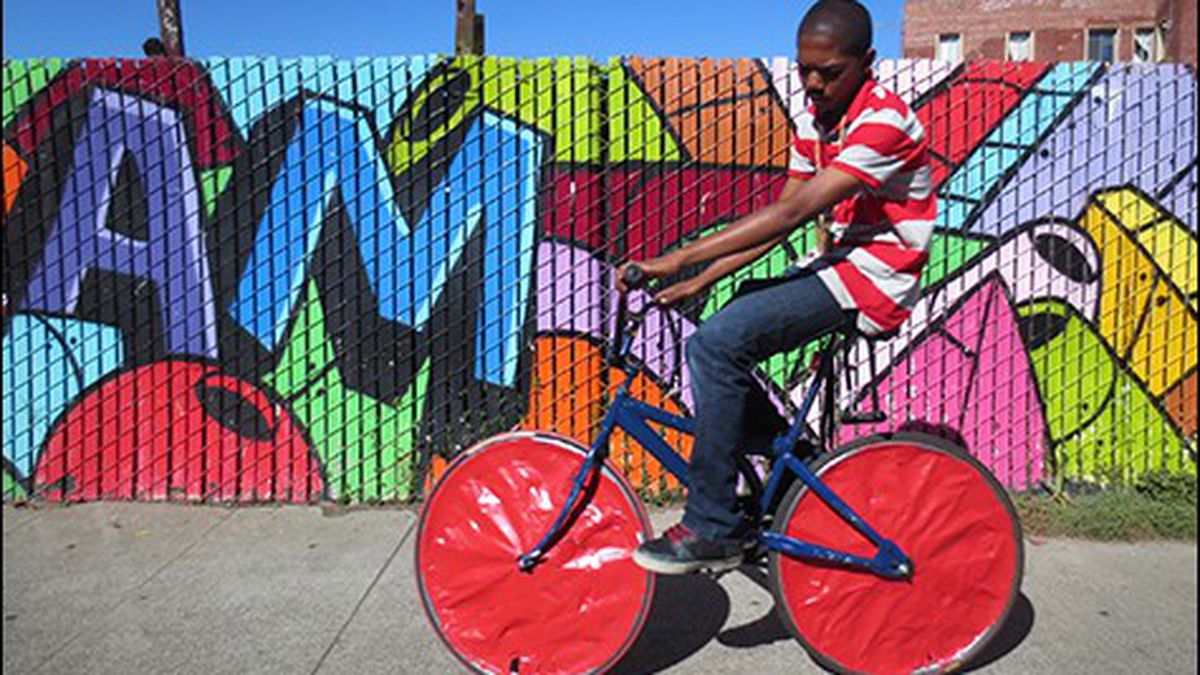 Creating Their Own Image

A West Oakland artist tries to confront the tensions of gentrification in her neighborhood head-on — by giving "traditional" residents her camera.

Kristopher McCoy is tired of people thinking he might rob them. “I’m not that troubled kid,” said the fifteen-year-old, who’s a freshman at MetWest High School in Oakland. “I’m just another kid trying to make it in life and do right.”

For the last several months, McCoy has been reflecting on how people view youth like him, a black teenager living in West Oakland. “For young men growing up here, it’s this shaky experience,” he said. “People that feel like I might hurt them or I’m going to rob them, they don’t know me. … They got to get to know you better.”

McCoy recently had the opportunity to confront these stereotypes in a new exhibit called Here. Before. Art From a Contested Space. The project — spearheaded by artist Elizabeth Pastorfield-Li, who goes by the name Epli — aims to explore the tensions of gentrification in West Oakland through the perspectives of five “traditional residents,” as she calls them. Lending them her camera, Epli helped them create a series of self-portraits based on their day-to-day lives, how they feel gentrifiers see them, and the question of “who is the true storyteller when an image is made?” (In that exercise, Epli photographed the subjects and had them write on the prints with a Sharpie pen.) For the assignment of how gentrifiers see them, McCoy took a photo of his legs, on one of which he drew an image of an ankle monitor. As for how he sees himself, McCoy posed on his Scraper bike.

While Epli gave the participants assignments, and in some instances even pressed the shutter button, the participants ultimately had control over their images and the stories they hoped to tell. The resulting series of photos will be on display at Defremery Park in West Oakland this weekend. The exhibit will also include a panel discussion with the participants — a chance, said Epli, for West Oaklanders old and new to talk about gentrification.

Epli, who is Chinese American and grew up in a suburb of Washington, DC, came to West Oakland in September 2008. “I didn’t know about the history or gentrification,” said Epli, 32. “I moved to West Oakland, because this is what I could afford.”

As she took her first walk around her new neighborhood, she thought, “‘Something is funny here.’ I wasn’t quite sure if I belonged,” she recalled. The question — “Is it okay that I’m here?” — nagged her for years.

Epli knew she wanted to explore the topic through some type of photo project, but she wasn’t sure how to approach it. “It felt really inappropriate for me to be taking photographs,” said Epli, who self-identifies as a “gentrifier.” I didn’t want any part of my storytelling to interfere. It took me a really long time to figure out.”

This summer, she finally decided to hand her camera over to longtime residents of West Oakland who have been impacted by gentrification. Using various methods, including posting fliers in the neighborhood and reaching out to local community groups, Epli recruited the five people included in the exhibit, which in addition to McCoy includes Ayodele Nzinga, the director of the theater company Lower Bottom Playaz who has lived in and around West Oakland for decades; Richard Jackson, a seventeen-year-old who works at Bikes 4 Life; Leander Muhammad, a local basketball coach and afterschool program coordinator; and Antoine Hunter, a deaf dancer who founded Urban Jazz Dance Company and is president of the Bay Area Black Deaf Advocates.

Nzinga said she signed on to the project because she was attracted to the idea of an artistic study of gentrification that let longtime residents control the narrative. “If you don’t tell your own story, somebody else will,” she said. “It’s extremely important to tell your story.”

She recounted how she has moved all around the East Bay since she was a child, directly because of gentrification. “It has been a process that has herded me my entire life,” she said. For the assignment regarding how newcomers view longtime residents like her, Nzinga staged a photograph in which she “tried to disappear.” “We are basically invisible,” she said.

And as West Oakland continues to change at a rapid rate, projects like Here. Before. are important in recognizing the area’s rich history, Nzinga continued. “I consciously want to be a part of, at this point, preserving the legacy.”

Hunter, who grew up in West Oakland, said that art is a way to respond to obstacles and challenges. “When you can’t express yourself, you start to go crazy,” he said. In the case of Here. Now, it’s about pushing back against the erasure of the neighborhood’s history, he said. “People are coming together to fight for it,” he said. “We have a lot here we have to keep alive. And the only way to do that is to bring the community together and keep it together.”

For Muhammad, who also grew up in West Oakland, the aim of the project is simple: “We need to talk about this,” he said. “We never communicate.” He said he hopes this weekend’s panel discussion will become something of a regular meet-up to address what he sees as ongoing issues of gentrification, including the fact that resources aren’t going to those who need them most and that nonprofit groups purporting to represent West Oakland have no leaders of color. Of Epli’s involvement, he added, “Even though she’s not truly a resident of West Oakland, I’m glad she took the initiative to do this, to build a bridge.”

For Epli, the project is not about stopping gentrification. After all, the median home sale price for the 94607 zip code in July of this year was $407,500, nearly four times what it was in 2009, according to data from local firm ZipRealty. Instead, it is primarily about listening to each other and exploring how people can communicate in a “contested space” like West Oakland.

“The whole point of the project is to not have a goal,” she said. “Quietly, my goal is that people can acknowledge each other a little more, even in the simplest ways.”