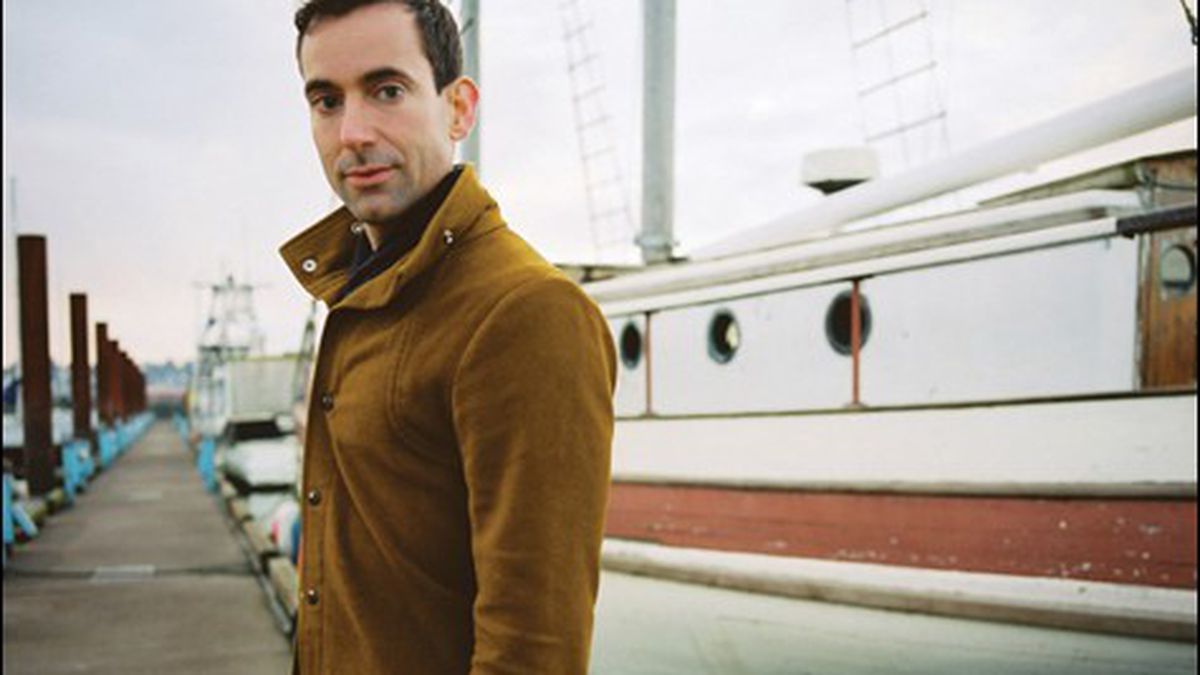 The graphic novelist's latest tale of love and loss takes readers on a journey to the Middle East.

Craig Thompson’s new graphic novel Habibi is, among many things, a sprawling love story with nods to Song of Songs and Arabian Nights. But it’s also a portrait of sexual trauma — a fairy tale that’s by turns tender and bawdy and brutally dark — and a kind of love letter to Islamic culture.

Perhaps more than anything, Habibi is a stunningly beautiful art object: 672 painstakingly intricate pages that astonish with their sheer level of detail, the way a ship made out of toothpicks, or the Eiffel Tower up close, astonishes. Every panel — every Persian-rug-inspired ornamental border, every swath of tiny Arabic lettering, every full-page spread of a crowded souq or palace doorway or garbage dump — is hand-drawn. No computer wizardry to speed the process along; a full six years of heavy lifting with pencil, pen, and ink.

But to focus only on the physical beauty of the drawings would be to undersell the ambitiousness of what Thompson has created. The Portland-based graphic novelist started working on the book back in 2004, when the Iraq war was in full swing and anti-Muslim sentiment in this country was running especially high.

Against this backdrop, Thompson began to weave a tale of two escaped child slaves who come of age in a fictional Middle Eastern country that feels timeless and exotic — but also despairingly modern. Dodola, an Arab girl, is sold into marriage by her parents and then kidnapped by slave traders. She escapes into the desert, but things only get worse even as she blossoms into a beautiful young woman: At various points in the narrative, Dodola is raped, battered, thrown into a dungeon, and forced to prostitute herself for food and water. Yet somehow she remains unbowed and resilient.

“Dodola is not a victim,” Thompson stressed in a recent phone interview. In part what buoys Dodola is the protectiveness that she feels toward Zam, a black slave whom she rescues and adopts when he is just a toddler. For a time the two live an idyllic life together on an abandoned boat that they find in the desert — until that peace is shattered by the aforementioned (and relentless) string of misadventures.

Of course, once he enters puberty Zam begins to develop romantic feelings for his caregiver, and at a pivotal moment he witnesses, helplessly, an act of sexual violence that’s perpetrated against Dodola. So it is Zam — guilt-ridden and traumatized, deeply uncomfortable with his own budding sexuality — who emerges as the story’s more tragic figure. The two protagonists are separated for much of the book until, through a series of unlikely reversals, they’re able to find each other once again.

In the world of comics, Thompson is something of a superhero. When his most famous book, Blankets, was released in 2003, it was probably the longest graphic novel ever to have been published — a whopping 592 pages. Just about everyone reads the whole thing in one sitting. Beyond its length, Blankets struck a chord in readers with its searingly honest recounting of Thompson’s own childhood in an oppressive fundamentalist Christian family in the Midwest and how, as a teenager, he lost his faith. The book also features one of the best accounts of falling in love for the first time that you’ll ever read anywhere.

Habibi, by necessity, isn’t as intimate a read. Many of the themes are the same — coming of age, sexual awakening, grappling with religious orthodoxy — but now Thompson is dealing in pure fiction, with a slant toward the exotic. Habibi takes place in a wholly invented world, where the characters are Arab but often speak in slangy American idiom. The scene shifts from the vast desert to an Arabian Nights-inspired sultan’s palace to a trash-infested urban wasteland — and the novel’s tone changes to an extent with each shift.

After he finished Blankets, Thompson says, he was tired of writing about himself, tired of drawing mundane Midwestern landscapes. And so he decided that his next book would be either totally fantastical or else something politically relevant, along the lines of Joe Sacco’s comics journalism — Habibi ended up becoming a mix of both. It also takes the reader to a much darker place, psychologically, than Blankets ever did.

“The process of the book was like a sort of plunging into darkness,” Thompson said. “Confronting my own darkness, and not knowing if I’d get lost in it or emerge on the other side.”

Although Thompson says he had no particular political agenda in writing the book, he concedes that the post-9/11 backlash against the Muslim world did provide some inspiration.

“I think Americans sort of lash back against Islamic culture because it’s the same flavor of religious fundamentalism that we have in our country,” he said.

So Thompson started researching Islamic art, and he read the Koran for the first time — he even took a trip to Morocco to soak in more of the culture. He quickly confirmed his suspicion that, as corny as it may sound, many people in the Middle East just want peace.

“I guess if there was an agenda, I was starting from a place of appreciating some of the aspects of that culture, especially because they were being vilified so much,” he explained.

Thompson’s reverence for Islamic culture is obvious throughout the book. Just flip through and you’ll see page after page of homage to the calligraphy and ornamentation and geometric design that are so prominent in Islamic art — arts that evolved to a higher level in the Middle East due to long-standing prohibitions against images.

The only tangible benefit of Dodola’s short-lived marriage is that her husband, a scribe, teaches her how to read and write. She falls in love with language, with Sufi numerology, and, above all, with storytelling — sharing stories from the Koran becomes a way for her to comfort and encourage Zam.

And so Habibi is filled with beautifully rendered scriptural tales, often Koranic versions of stories that will be familiar to readers who come from the Judeo-Christian tradition: Adam and Eve, Abraham’s sacrifice, Moses and the burning bush. Sometimes the differences between the Koranic story and the Biblical version can be fascinating: Did you know that according to the Koran, Noah’s wife wasn’t allowed on the ark because she wasn’t a believer?

But overall, the message is clear: There really isn’t so much difference between the faiths.

The one knock you’ll occasionally see on Thompson’s work is that it borders on “emo,” a characterization that’s somewhat understandable. In Habibi, as in Blankets, there’s no shortage of angst and earnest sentimentality. There are chapters bearing titles like “Drowning” and “Raping Eden.” One chapter — a crucial one — has no pictures, just ten pages of lamentation.

Thompson has talked in interviews about how he feels he’s grown up since he started writing Habibi — how in the past six years he’s gone from coping with a devastating breakup to finally being able to handle being in a mature adult relationship. And so there is a hopefulness that’s evident in the way the love story of Dodola and Zam resolves itself, however grim long stretches of it may seem.

Anyway, for the most part, Thompson’s is the kind of emo that anyone who’s even a little bit romantic can embrace: bittersweet, deeply felt, and filled with yearning and tenderness and doubt.