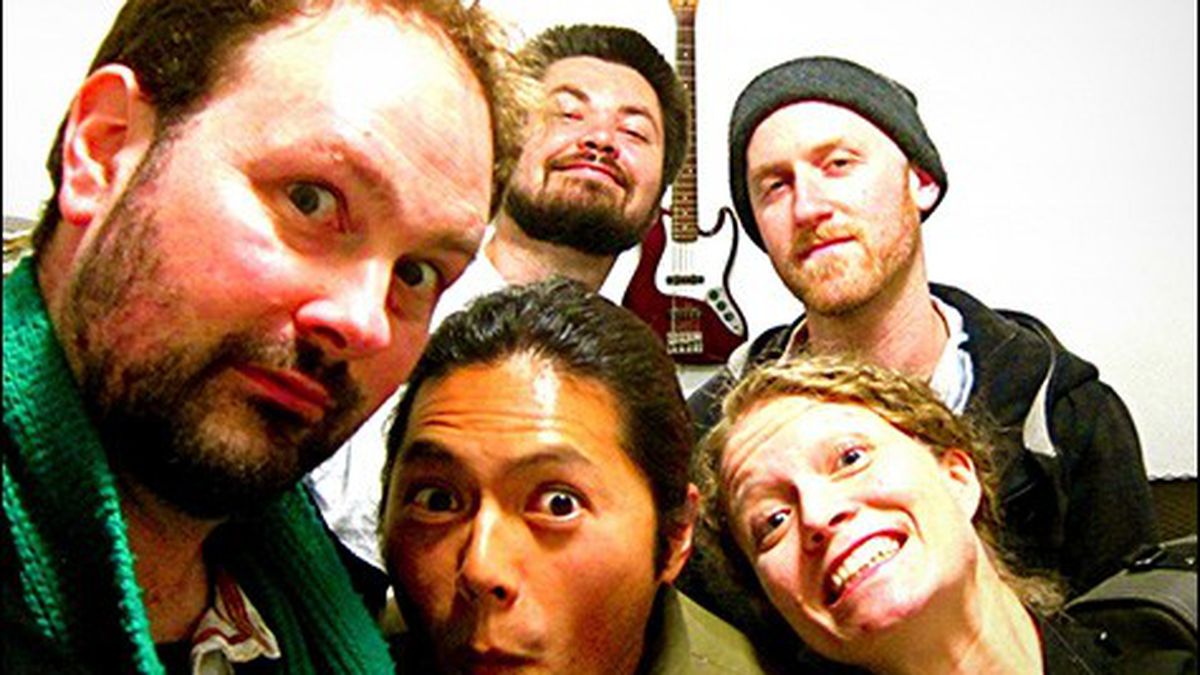 Robot Invasion, the debut album by the Klaxon Mutant Allstars, represents the voracious appetite of the Bay Area jazz scene, where any and all sounds are fair game for sonic repurposing. Led by drummer Eric Garland and trumpeter Henry Hung, the Allstars first came together in 2011 at San Francisco’s Amnesia, where Garland was in charge of the Wednesday night jam session. He used the slot as an opportunity to try out different lineups, and hit paydirt with saxophonist Kasey Knudsen, keyboardist Colin Hagen, and bassist George Ban-Weiss.

“Holy cow, that was a good group!” Garland recalled. “Henry came in with a lot of energy, primed to do more originals and experiment with electronics. We’re all influenced by straight-ahead jazz, but there’s this rock element in all of our histories. I’ve gone through all my phases: reggae, trip-hop, Radiohead, St. Vincent. We were drawing on all of that, even the contemporary classical stuff.”

The foursome continued jamming at Amnesia for a year and a half. “Usually someone would bring in something new, and they’re all such great sight readers we could try it out without being afraid of messing things up,” said Hung. The musicians finally became a band when they were invited to play the Offside Festival in 2012.

The band’s moniker was chosen with tongue firmly planted in cheek, but the “allstars” billing isn’t a stretch. Knudsen has quietly become one of the essential voices on the Bay Area scene. Aside from Klaxon, she plays in more than half a dozen of the region’s most interesting ensembles, including Schimscheimer Family Trio with keyboardist Michael Coleman and drummer Jon Arkin; guitarist Nathan Clevenger’s chamber jazz quintet; trombonist Rob Ewings’ Radiohead-inspired project, Disappear Incompletely; and the Holly Martins, with vocalist Lorin Benedict and guitarist Eric Vogler (a wildly inventive trio that’s recording a live album at the California Jazz Conservatory June 21-22).

Hung recently earned a Grammy with the Pacific Mambo Orchestra; he also blows brassy funk with Con Brio and gets tapped for singular events like the David Byrne-assembled Atomic Bomb project, which explores the music of Nigerian funkster William Onyeabor. And Garland is a ubiquitous presence who can be found powering various Jazz Mafia outfits, as well as the Realistic Orchestra and the Brass Monkey Brass Band.

As Klaxon’s primary composers, Hung and Garland supply an array of soundscapes for investigation. The centerpiece of Robot Invasion is Hung’s picaresque “Jamie Moyer,” a twelve-minute piece inspired by the major leaguer who set numerous records as the oldest pitcher in baseball. “He did it by being smarter, using his wiles,” Hung said. “I want my life to be like that. I want to have a career like that.”

Crafty is the best way to describe Hung’s use of electronics, a defining element of Klaxon’s sound. While Miles Davis wasn’t the first trumpeter to plug in his horn, he was so influential that any musician who employs effects has to contend with his shadow. Hung has been very conscious about avoiding Davis’ patented wah-wah sound. Instead, he warps and compresses notes to fill out textures and provide a wide palette of hues, from sonar pings to translucent watercolor washes.

“Over the last ten years I’ve dabbled with effects, borrowing pedals from guitar-playing friends,” Hung said. “For Klaxon gigs I bring a pitch modulator, so that whatever note you play, the pedal can play a perfect fifth or third above. I use pedals with my left hand so I can manipulate them when I’m playing. It’s a search for new textures, and you try to get as far away from the recognizable horn sound.”

Klaxon has occasionally been described as a fusion combo. But to the extent that fusion is associated with chops-laden shredding, the stylistic tag misses the mark. With a wide-open aesthetic and an eagerness to tackle new ideas, Klaxon combines the experimental ethos of an improvisers’ workshop with the rough-and-ready vibe of a punk outfit.

Said Garland: “We almost think of ourselves as garage-rock band, but with jazz.”

Facebook
Twitter
Linkedin
Previous articleReport: When It Comes to Mortgage Loan Servicing, Banks Are Still Failing to Comply With the Law
Next articleWednesday Must Reads: LAO Says Brown Is Overestimating Costs, Too; Feds Say Most of California’s Shale Oil Reserves Area Not Recoverable Via Fracking
18,646FansLike
0FollowersFollow
67,429FollowersFollow