In the latest exhibition at Betti Ono Gallery, the local artist personalizes the futuristic mythology and folklore of the African diaspora. 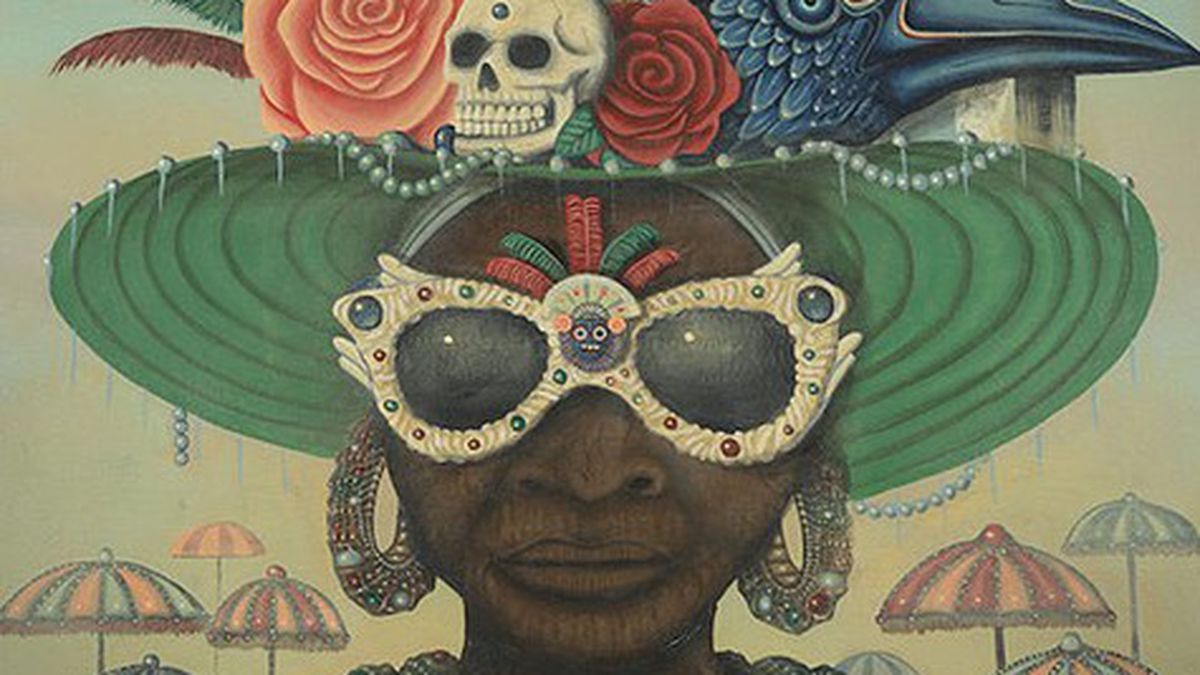 In the painting “Zyla” from Paul Lewin’s newest collection of work, Roots of the Cotton Tree, an ancient, beautiful woman seems to levitate out of the center of the portrait to meet the viewer. Though her eyes are hidden beneath a pair of marvelous sunglasses, one can sense her gaze in the eye sockets of masks and skulls adorning her hat, and the glassy stare of a crow’s head nestled on the brim. “I feel like it’s her, somewhere in the afterlife right now, at a really big festival,” said Lewin in a recent interview. The portrait, inspired by the image of his grandmother, is central to Lewin’s latest body of work.

Lewin, who is originally from Jamaica but is now based in Oakland, currently has Roots of the Cotton Tree on view at Betti Ono Gallery (1427 Broadway, Oakland) until August 29. The show is inspired by the various strains of folklore, surrealism, and science fiction that emerge from the African diaspora. To begin the work, Lewin researched his ancestry and discovered themes of art being used as a tool to resist oppression and celebrate the sacred. By exploring folkloric, legendary storytelling in West Africa and the Caribbean, he adopted motifs that now recur throughout Roots such as the swallow-tail Hummingbird (the national bird of Jamaica), Burkinabé masks, and constellations involved in the astronomical lore of Mali’s Dogon tribe. The subjects of Lewin’s portraits are often joined by ancient characters, or people of the future. Stars and radiant orbs lavish each image with reverence. Meanwhile, hummingbirds and spheres painted on the gallery walls ornament the vibrant collection of works.

During the process of creating the pieces, Lewin returned to his birthplace of Kingston, Jamaica for the first time since he left as a young child in 1977. “As we drove around, I didn’t recognize anything,” said Lewin of the trip. “I just had this powerful, welcoming, amazing feeling.” One of the most memorable aspects of his visit was the experience of confronting racial identity in a new way. “It’s a constant thing here [in the United States] from the moment you walk out of your door,” he said. “I loved that feeling when I was in Jamaica, this freeing feeling, I just put my guard down a little bit.”

Much of Lewin’s work falls into the genre of Afrofuturism, a visual and literary movement that centers Black people in narratives of the future. For many artists, Afrofuturism presents the joyous opportunity to reimagine the future of the African diaspora outside of systems of oppression that continually marginalize and invalidate the existence of its people. For Lewin, that process of imagining is a sacred engagement. “I believe all art by people of color is important to the concept of valuing Black life,” he said.

By imaginatively elaborating on the thread of his bloodline all the way to West Africa, Lewin pieced together a surreal puzzle of enslavement, colonization and galactic rebellion for Roots. The characters depicted in his pieces are often fictional, though the women enshrined in his paintings reflect the characteristics of the women in his family. And, from his stories, it seems that he owes his process-heavy creative tendencies to his father.

As a young boy, Lewin watched his father embark on fantastic creative ventures at home. The most memorable was an enormous wooden train set that encompassed their entire porch. On weekends, his father would work on the trains from sunrise to sundown. After spending eight years on the giant set, a hurricane destroyed it in one swoop. His father simply shrugged in response: “Oh, well.” Lewin was always taught to appreciate self-exploration and artistic journey over final products.

Lewin’s process is present in his work, through the way that he embeds memories and stories of the African diaspora within the gestures of his painted subjects. The rich detail and sumptuous color palette of the works in Roots occasionally overwhelm the eye, particularly in the densely packed space at Betti Ono. But with the lavish adornments that surround each figure with a sort of baroque, embodied halo, Lewin’s work alludes to a sincere and radical self-love.