Video and OPD records indicate that the military veteran was savagely beaten on November 2 by Oakland Police Officer Frank Uu, who has since retired from the force. 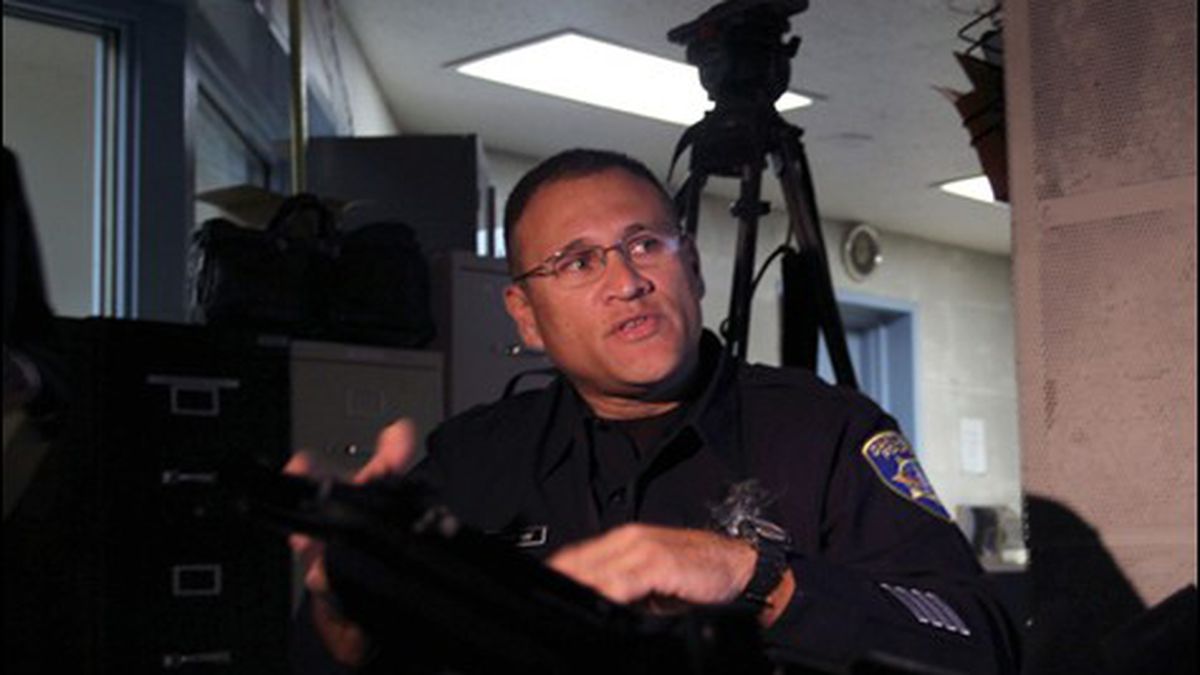 Downtown Oakland was flooded with people on the evening of November 2. Tens of thousands of participants in Oakland’s first general strike since 1946 were trickling back to the city center after temporarily stopping operations at the Port of Oakland that afternoon. The citywide economic shutdown marked the peak of Occupy Oakland to date and provided a striking West Coast counterpoint to Occupy Wall Street.

From the early morning until mid-evening, tens of thousands of demonstrators protesting against widening economic inequality, social injustice, and police brutality had remained largely peaceful. The notable exception was a mid-afternoon anticapitalist march that saw bank windows shattered in the Uptown district and a Whole Foods supermarket defaced, as well as scuffles between some “Black Bloc” protesters and demonstrators intent on stopping vandalism and property destruction.

Throughout the day, police were conspicuously absent from the streets. Even at the height of the afternoon march, as protesters staved in the plate-glass windows of a Bank of America branch, two California Highway Patrol motorcycle officers watched the crowd briefly from a distance before driving off. OPD records indicate that undercover cops were providing intelligence from actions throughout the day, but the department took a mostly hands-off approach to the general strike.

As the crowds made their way back from the Port of Oakland after dusk, the atmosphere palpably changed. A man and a woman crossing an intersection were struck by an irate driver of a late-model BMW. While the injured demonstrators were being helped into an ambulance, an already angry crowd was incensed by the decision of BART police to let the driver leave the scene. A block north of Occupy Oakland’s camp in Frank Ogawa Plaza, an Occupy splinter group took over the foreclosed Traveler’s Aid Society building for use as an organizing center. As banners were hung and people danced outside, some protesters piled debris in the street as impromptu barricades, then lit them on fire.

It was at this point that OPD decided to move in and disperse the crowd. Officers unleashed flash-bang grenades and tear gas against a mass of people as the burning trash and chemical munitions combined to create a noxious smell. For the second time in a week, the heart of Oakland turned into chaos.

And again, for the second time in eight days, an American armed forces veteran lay crumpled on an Oakland sidewalk, severely injured by riot-gear-wearing police officers. Video of US Marine veteran Scott Olsen being injured on October 25 was broadcast around the world, prompting severe criticism of Oakland officials and helping provide Occupy Oakland with the political capital and impetus to successfully organize a general strike a week later.

But the injuries sustained by Kayvan Sabeghi, a 32-year-old military veteran who served in Afghanistan, were not as widely publicized as the Olsen incident, and the media narrative surrounding the general strike focused largely on the vandalism and property destruction in downtown.

Video of Sabeghi’s beating at the hands of an officer from one of OPD’s Tango teams — riot police armed with beanbag-loaded shotguns, flash-bang grenades, and other crowd-control munitions — surfaced two weeks after November 2, and portrays deliberate aggression by police against an unarmed, unresisting man that rivals the severity of Olsen’s head wound.

The footage, taken by Neil Rivas, shows Sabeghi, clad in shorts and a black T-shirt, backpedaling slowly in front of a line of riot police that were methodically advancing and chanting, “move” in unison. At one point, Sabeghi tells the officers, “I want you to know that I killed for this country.” Though the lighting is poor, at one point an officer breaks ranks and shoves Sabeghi twice, yelling, “Did you hear me? I said get the fuck outta here!”

Sabeghi continues to walk backward as the officer tells him to leave. Sabeghi says something inaudible to the officer, at which point the cop grabs him, then begins to strike him on the legs and lower torso, ordering Sabeghi onto the ground.

The savage beating left Sabeghi with a ruptured spleen. According to Rachel Lederman, a National Lawyers Guild attorney who is part of a legal team helping Sabeghi, a tort claim has been filed and a full civil suit is in the works.

Freeze-frames of the video show the officer wearing a backpack emblazoned with “Tango Team.” The last two digits of the officer’s helmet number, “32,” are also clearly visible.

While participating in crowd control and tactical operations, Oakland Police Officer Frank Uu was assigned helmet number 532, according to OPD records. All Oakland Police officers deployed during demonstrations are required to have clearly visible numbers on their helmets, part of the court-ordered revision of OPD’s crowd-control policies following clashes with peaceful anti-war demonstrators at the Port of Oakland in 2003.

According to OPD’s detail roster from the evening of the general strike, Uu is the only one of the officers assigned to a Tango team on November 2 with a helmet number ending in 32. Oakland police documents obtained by this reporter indicate that the officer who jumped the line on Sabeghi is no longer on the force. A log of police Vievu lapel cameras issued to OPD officers indicates that Uu retired from OPD, and his camera was returned on March 1. Public Record Act requests for footage from Uu’s camera have been withheld due to an ongoing investigation. Shortly after footage of Sabeghi’s beating became public, OPD announced it was conducting an investigation into the incident.

“It makes you wonder if it had something to do with the misconduct,” Lederman said.

OPD did not return requests for comment on Uu’s retirement or the Sabeghi investigation. Barry Donelan, president of the Oakland police union, declined to comment. “I’m not gonna talk about an individual member of service. It’s never going to happen,” Donelan said.

Uu had been with the Oakland Police Department since the early 1990s, and, until recently, was on OPD’s SWAT team and served as a firearms instructor. Uu is part of a group of tight-knit Tango team officers who have been at the heart of OPD’s violent clashes with Occupy Oakland demonstrators. He was present during a May 2010 charity boxing match between OPD officers and state prison guards that devolved into a brawl, though video of the incident shows Uu trying to restrain Sergeant Roland Holmgren from fighting. During the October 25 raid on Occupy Oakland, Uu was photographed with a shotgun in hand, flanking his SWAT colleagues, Sergeant Patrick Gonzales and Officer Casey Johnson.

Court documents also identify Uu as one of the officers who fired wooden dowels and beanbag rounds during the clash between OPD and antiwar demonstrators in April 2003.

Uu was last deployed in a crowd-control action on January 7, the night of the first “Fuck the Police” march held weekly by an Occupy Oakland splinter group.

Correction: The original version of this story stated that Sabeghi is a co-owner of Elevation 66 Brewing Company. He left the business a few months ago, according to co-owner Brian Kelly.

Next ArticleMid-Week Menu: Lots of New Restaurants and One Sad Fire