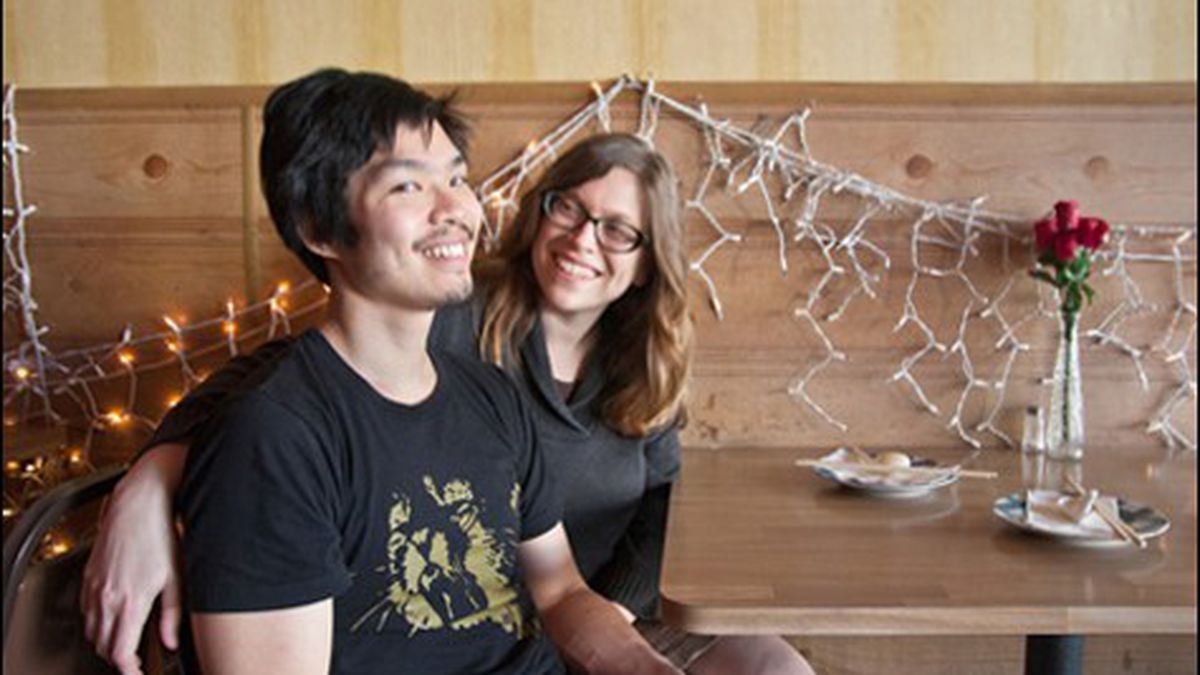 Cookbook on a Mission

I once had a housemate who wrote me notes on the refrigerator whiteboard, instructing me on how to behave. “Put silverware in dish drainer handles facing down,” that sort of thing. She never signed them, giving the overall impression that the house itself was politely admonishing me. The voice of Mission Street Food is often one of omniscience, too, but, unlike that strange house-share, it’s a friendly, funny sort of cacophony. Although some of the passages in the sorta-kinda-cookbook by Anthony Myint and Karen Leibowitz bear a byline, the majority don’t. As a result, the book seems to speak as much from a communal spirit as all of the couple’s endeavors have — including renting a taco truck four Thursday nights in a row (thus helping kick-start San Francisco’s citywide foodie-food-cart lust affair); devising the guest-chef-laden, theme-menu creativity of Mission Street Food (held two nights a row in a run-down, unpopular Chinese spot called Lung Shan); and securing residence at two very different Mission Street restaurants, Commonwealth and Mission Chinese Food (also in Lung Shan). “Our use of bylines,” the couple wrote me, “or lack thereof, was less intentional than process-driven: From the beginning, we wanted to create a book that would express the multiple perspectives behind Mission Street Food, but it took us a while to find the right format to capture both commonality and individuality.”

Besides that invisible narrator feeling, Mission Street Food has little in common with the recipe-heavy, food-porn photography spectaculars most folks are used to, which is appropriate since Mission Street was not your typical restaurant. The book is the first of McSweeney’s “Insatiables” cooking imprint, and the book’s gorgeous design and sometimes-sarcastic, highly subjective, and deeply entertaining tone will fit right on the bookshelf with your Believers and Millard Kaufman novels.

The book swings easily from a half-assed but good-hearted business plan to Myint’s autobiography to an eight-page comic to essays on multicultural theory and the power of social media, and, finally, to about a hundred pages of cooking instructions. But you won’t find dinner-party menus in Mission Street Food. What you will find — just as you will at Mission Chinese and Commonwealth — are dishes to render you teary with desire, plus philosophy, price-per-serving, buying tips, jokes, and lots and lots of photos of real people — Myint, his cohort Danny Bowien, and countless shifus (head chefs for Lung Shan’s regular menu) doing real restaurant grunt-work.

“We tried to break a lot of the unspoken rules of cookbooks,” say the authors, who will be at Books Inc. (1760 Fourth St., Berkeley) on Saturday, September 10. “Overall, we were trying not to glamorize an unglamorous experience.”

While not glamorous, Mission Street Food is inspiring, particularly with the outfit’s benevolent practice of always donating a portion of proceeds to local food banks and other hunger charities (some of which are profiled in the book). Proceeds from the book itself go to Slow Food USA, despite, as Myint and Leibowitz write in the book’s opening pages, Mission Street Food’s tight bottom line, sometimes irresponsibly sourced ingredients, and “bravado regarding fast-food chicken.”

“For a sudden shot-in-the-arm-style donation,” wrote the authors, “we thought it would make sense to get involved in the Farm Bill coming before Congress next year. It’s a time-sensitive issue that can have a huge effect on America’s relationship to food.” Because in the world of Mission Street Food, you can have your tea-smoked eel and eat your Popeye’s Chicken, too. 5 p.m., free. 510-525-7777 or BooksInc.net