.Communitē Table Is a Welcome Addition to Oakland’s Laurel District

Stop in for dinner or buy a potpie to go. 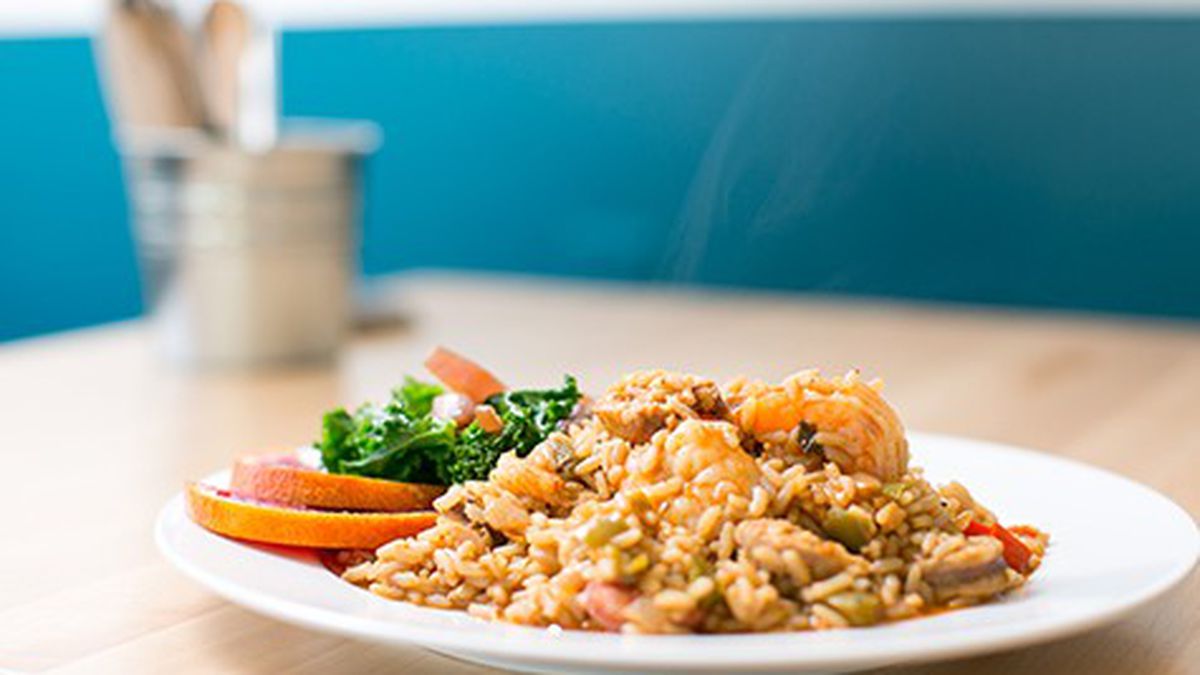 For those of us who are aspirational cooks — who possess more good intentions than knife skills — trying to get a weeknight dinner on the table can feel like an exercise in futility.

Michele LeProhn understands this challenge acutely. She is the chef-owner of a new restaurant in Oakland’s Laurel district called Communitē Table (with a vaguely European long-vowel mark over the “e”) — a place she said she created with the idea that young families and busy professionals who don’t have time to cook would be able to swing by for a meal, or pick up a few side dishes or a main course to supplement their dinner at home.

Of course, that’s not exactly a new concept — “let us cook for you” being the slogan of any number of dining establishments, and the literal basis for the very concept of running a restaurant.

But LeProhn, who used to manage the North Berkeley mainstay Poulet (which had a similar focus on wholesome takeout fare), is a longtime resident of the Laurel district, and she said that the neighborhood has had a particular dearth of decent takeout options — and good restaurants in general, with the exception of a handful of newer places.

If my recent visits were any indication, people in the neighborhood have been waiting for just such a place. The dining room was impressively packed even for a middle-of-the-week dinner service. The menu, which changes weekly, is short and simple, and while the food won’t win prizes for originality, there is a homeyness and honesty to it that’s very appealing.

All of last week, the menu had a New Orleans theme for Mardi Gras, and while LeProhn said that she has never been to New Orleans herself, her full-flavored takes on classics such as red beans and rice and shrimp jambalaya had a lovely smoky flavor thanks to a generous helping of andouille sausage (courtesy of Oakland’s own Taylor’s Sausage) — though those who crave heat will be grateful for the bottle of Crystal hot sauce that is offered on request. My favorite dish was probably also the most basic: a square of mac ‘n’ cheese that had been baked until its edges and breadcrumb topping were irresistibly caramelized and crunchy.

Among its many aspirations, Communitē Table tries to be the kind of restaurant that parents can feel good about coming to with their kids. Every dish includes some kind of nod to healthfulness: a little pile of dressed greens or a few slices of fresh fruit. And with the exception of the bread (from Semifreddi’s) and the small selection of local beers and wines on tap, just about everything else is made from scratch in-house. The home-style desserts, in particular, were a highlight: rich, creamy, raisin-studded bread pudding and a lemon curd tart that, unlike so many so-called lemon desserts, had enough of a sour punch to satisfy the true believer.

But the centerpiece of the restaurant — which boasts, among other amenities, a small private parking lot — is the deli case that contains a rotating selection of salads and other to-go items.

Most of what I tried was pleasantly wholesome, if perhaps a bit unexciting, which is similar to how I feel about, say, the prepared foods section at Whole Foods — though of course there is no Whole Foods, or other comparable takeout option, in Communitē Table’s immediate vicinity. During my visits, options included meatloaf, a couple different kinds of roasted vegetables, chicken and tuna salads, and a multi-grain salad — a mixture of quinoa, rice, and lentils — that was a bit too “crunchy” (both in the excessively-al-dente and hippie-granola sense) for my taste.

Most of the to-go options are kept cold in the refrigerated case, aside from the trays of roast chicken that come out still warm from the oven — the half chicken I brought home was extra-lemony, and had reasonably crisp, well-seasoned skin. While it was no Zuni chicken, it was a lot better, and more juicy, than the rotisserie birds you can buy at the grocery store.

Where you probably won’t go wrong is with ordering a carton of the soup of the day — a zippy carrot-ginger purée on one occasion, and a soul-warming mushroom and barley soup on another. They’re the kinds of soups your grandmother makes for you on a rainy day — simple and mildly seasoned, and all the more comforting for being so.

My favorite discovery was a classic bit of Americana known as the twice-baked, or “restuffed,” potato — a baked potato whose insides have been mashed up and mixed with sour cream and cheese, then spooned back into its empty potato-skin shell, ready for you to rebake until hot and oozy at home. There’s a vegetarian version that involves broccoli, but for me the crowning glory was the scattering of crispy, salty bacon on top — all in all, a decadent side dish or, if you order a couple, a whole meal in itself.

The restaurant also offers a selection of frozen items that customers can heat up at home — soups and savory pies, mainly. The chicken potpie turned out to be one of the best things to come out of the kitchen. It had everything I look for in a potpie: a buttery, flaky top crust that was satisfyingly oozy and soggy underneath; plump pieces of chicken (roasted whole, then taken off the bone); and a soupy, dill-spiked mélange of sweet carrots and celery cooked soft. An eight-inch pie ($20) was hearty enough to feed three hungry people, and tasty enough to fill the Bakesale Betty-sized hole I’ve had in my heart ever since that Temescal institution stopped offering its potpies with any regularity.

And, of course, if you’re willing to wait a little bit longer (or call ahead), everything on the restaurant menu is available for takeout, too.

Because Communitē Table aspires to be a community-oriented gathering place, its success will be determined, at least in part, by the warmth of its staff. And in that regard, I’m happy to give a glowing report: Every staff member I interacted with was exceedingly friendly and patient, though it should be noted that the casual vibe makes it feel more like you’re dining in a friend’s kitchen, or the dining area of a well-appointed bed and breakfast, than at a formal sit-down restaurant.

For LeProhn, success can also be measured by the number of customers who have already told her that they come from the neighborhood — and not just from the Laurel, but also nearby Allendale, Millsmont, Redwood Heights, and the Dimond. And that should come as no surprise. There’s a wide swath of Oakland that could benefit from this kind of unassuming, practical community kitchen.