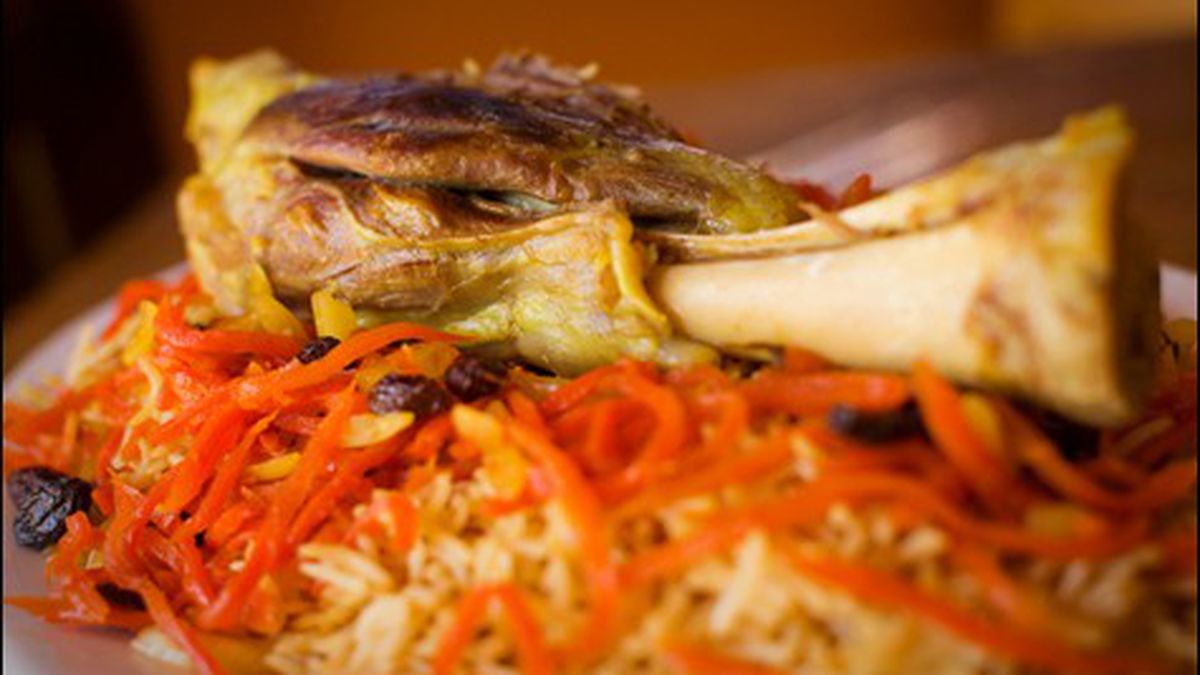 From tender lamb shanks to piping-hot bolani, this downtown Oakland hole-in-the-wall serves food like your Afghan grandma would make.

Sometimes you experience a cuisine for the first time and it’s like trying to learn a new language — you have no frame of reference, no sense of the syntax. (It took me two or three tries before I could wrap my head around Ethiopian food. Then I was hooked.) Other times you take your first bite and there’s a comforting sense of familiarity: You’ve tasted something like this before, even if you can’t quite put your finger on it.

Even if you’ve never tried Afghan cuisine, you’ll likely find the food at Kamdesh Afghan Kabab House nothing if not approachable. The restaurant, which opened in downtown Oakland last July, combines some of the best elements of cuisines I love: the rustic tandoor-based cooking of northern India, and the lamb shanks and kebabs that are so ubiquitous in Persian cuisine. More than that, the food just captures the essence of down-home comfort fare: tender braised meats; soft, garlicky vegetables; warm bread. I imagine if I had an Afghan grandmother, this is the food she’d serve.

The restaurant is located, incongruously, on the edge of Chinatown, and from the outside looks drab and, often, as though it might be closed — bars on windows have that effect. But once you’re inside, the space is bright and cheery, with walls painted more colorfully than you’d expect at a hole-in-the-wall Middle Eastern joint. There’s seating for maybe twenty people, and, at least during my two visits, the place seemed especially popular among the Spanish-speaking immigrant community.

I first heard about Kamdesh when a reader wrote in touting the restaurant as having the best bolani outside of Fremont’s De Afghanan, whose version he viewed as the best outside of Afghanistan. High praise. So of course the bolani — a traditional stuffed flatbread — was the first thing I ordered. Kamdesh’s version has a potato-and-onion filling that, for me, recalled the flavors of good homemade pierogi. The flatbread is grilled to order and arrives at the table piping hot, cut into generous wedges, with a raita-like yogurt sauce for dipping. Whether the bolani truly is the third-best in the entire world I’ll leave to the bolani writers to debate. Let’s just say my bar has been set pretty high.

Other appetizers were also good. The eggplant borani was a lush, garlicky spread, served warm with a healthy dollop of spiced yogurt on top. It was well-balanced and wonderfully savory — not excessively tomatoey like so many eggplant dishes are. I also enjoyed the mantoo: meaty little dumplings topped with yogurt and a spicy tomato sauce. Garden-variety frozen vegetables — corn, peas, green beans — made for an unfortunate and entirely unnecessary addition, however.

Though the restaurant bills itself as a “kabab house,” its signature dish isn’t a kebab, but rather its quabili pallow, a rice casserole that’s like a not-so-distant cousin of Indian biryani. It’s Afghanistan’s national dish. In Kamdesh’s version, perfectly-cooked rice comes flecked with toothsome sweet julienned carrots, sliced pistachios, and plump raisins. All this is mounded on top of a slow-braised lamb shank — the tender meat barely clinging to the bone. The coup de grace: The rice itself (the “pallow“) is cooked in lamb juices, adding even more meaty savoriness to the dish. The expression “gilding the lily” comes to mind, but I wasn’t about to complain — the rice was delicious enough to eat on its own, and if you’re lucky enough to have leftovers, it tastes even better the next day. (Vegetarians beware: This meat-juice-infused stunner is simply listed as “brown basmati rice” on the menu. Ask for the white rice.)

It’s worth noting that all of the meat served at Kamdesh is halal-certified, and in general it’s quite good — especially the lamb shanks, which are featured in a couple of different dishes. There are also about seven different kebab (charbroiled meat) options on the menu, all served with half a grilled tomato and a generous portion of rice. The beef tikka kebab was marinated in a spice blend that includes saffron and ground sumac — the meat was so well-seasoned and flavorful that I forgave the fact that it was also tough and overcooked. That said, make sure you specify how you’d like your meat cooked; otherwise, well-done seems to be the default. (Nonetheless, I asked that my lamb kebab be cooked medium during my second visit, and it still came out closer to medium-well.)

The only homemade beverage on the menu is doogh, a savory yogurt drink that has little bits of cucumber and mint mixed in. Served cold, it’s refreshing — a bit like drinking gazpacho or pickle juice — but perhaps not what I wanted to accompany my meal. One glass was plenty for my wife and me to share.

There’s also only one dessert: firnee, a chilled rice pudding that’s dusted with cardamom and minced pistachios. I enjoyed the rustic quality of the milky, mildly sweet pudding — the way there were uneven clumps of rice that I didn’t chew so much as mash against the back of my teeth with my tongue.

By my second visit to Kamdesh I started to feel like I was getting oriented with the cuisine. I figured out that while one shaker held salt, the other shaker was for sumac — a spice made from a kind of sour berry — which was good to sprinkle on the kebabs for an extra bit of tartness. I figured out that everything tasted better with a spoonful of the house-made chatni, or cilantro-mint hot sauce, a tub of which you’ll find at every table.

So my friend Thien and I made ourselves at home. And when we’d finished stuffing ourselves — when we’d eaten the last spoonful of pallow and stripped the shank of every last bit of meat — Thien picked up the bone and started working on the marrow. We cleaned out every last drop.